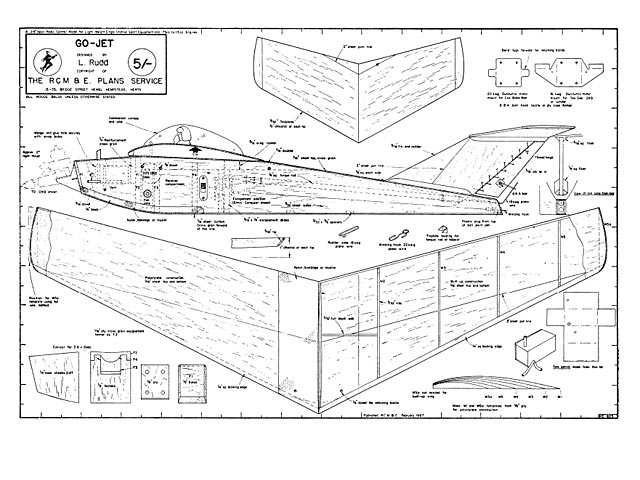 Being a firm believer in the small, simple, all-sheet (and cheap) R/C model and having had lots of fun with the Aeromodeller Simplex (oz3726) and Sharkface (oz4416) - with polystyrene wings - designs, I thought that a semi-scale swept wing layout would look that much better tearing about the sky. High mounted vee tailplanes seem to be in fashion - hence the Go-Jet.

Not knowing what stability would be like l played it safe and kept away from a low wing set-up. The high mounted wing makes a one-handed launch possible, and with these fast flying models you need the transmitter in your other hand.

The fuselage and engine mounting is a la Sharkface (thank you Mr Clutton), the wings are well sanded 1/16 in balsa covered polystyrene but alternative conventional construction is shown on the plan.

Construction: On the original, polystyrene cores were cut by the hot wire method using 1/4 in ply rib templates. The 1/16 sheet is cut exact size remembering to allow for the camber and angled tip on the top sheet. After pre-cementing and butt-joining, well sand both sides of this sheet. The leading edge is roughly tapered and chamfered, then held against the wing core and shaped to the ccorrect section using a sanding block.

Perhaps the assembly procedure would be of interest. The bottom sheet is positioned with its trailing edge flush with the edge of the building board then the leading edue is cemented and pinned into position, angling the pins to clear the top sheet when applied. Hold the polystyene core in position and chamfer the bottom sheet trailing edge using sanding block (that's why we positioned the trailing edge flush with edge of the board). The core is then glued in place. I have used white PVA but drying time is longer and the small amount of shrinkage put an alarming amount of undercamber in a wide chord. Consequently I now prefer Copydex.

Adhesive can now be applied to the core top surface and top sheeting leaving the leading and trailing edge areas clear. These joints are best made with balsa cement which makes sanding a lot easier since most contact glues tend to pull and tear...."

The article pages. Text and pics. 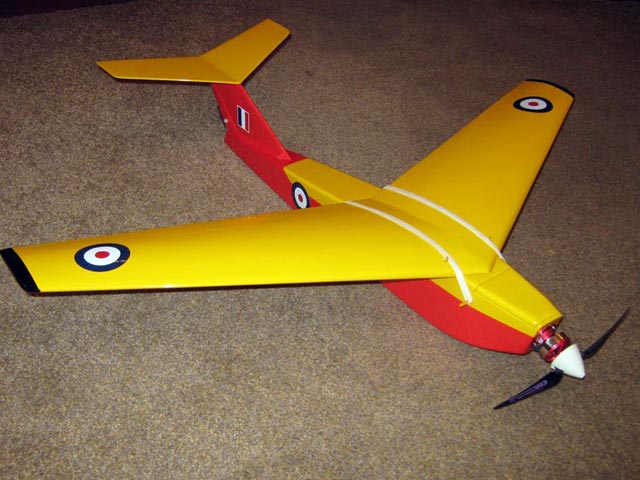 Please see attached image of my recently finished Go-Jet [main model pic]. Feel free to use image as you wish. Model is finished in the colour scheme of RAE Llanbedr. Regards,
GeeW - 04/02/2020
Add a comment