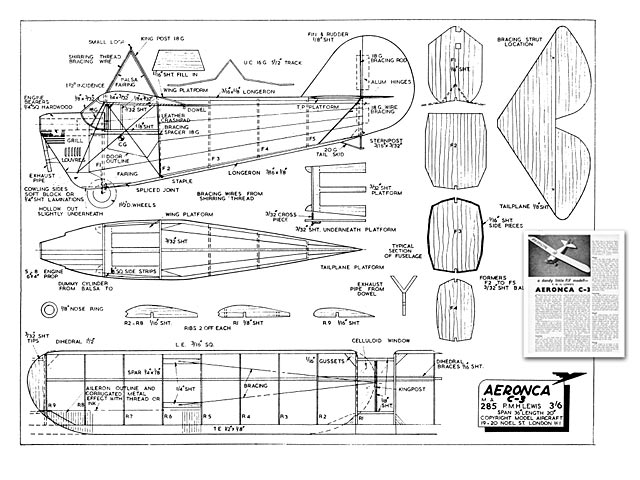 Cheap and safe flying for all has long been the aim of the enthusiast, and one of the most successful approaches towards this ideal was the little 'Razor-back' Aeronca of the 1935. Yearly improvements to the original design culminated in the Master C-3 of 1935 which forms this flying-scale model. The refinements of formers and stringers added to comprise the cabin on this final version of the two-seater resulted in the elimination of the sharp edge of the fuselage decking from which the machine earned its nickname.

Side mounting of a 0.5 to 0.8 cc engine, together with a dummy cylinder, makes an excellent substitute for the full-size power plant, and the aircraft's unusual lines and light-plane proportions contribute towards an eye-catching model with a fine, stable performance.

Fuselage. Two 3/16 x 1/8 in hard strips of balsa are pinned down on to the plan to form the upper and lower longerons, the latter one having the 20 G. wire tailskid bound and glued to it before being placed in position on the board. Formers F2 to F5 are cut from 3/32 in sheet and their left halves are cemented in place, together with the rudder post at the rear end.

Sheet, 1/16 in thick, forms the sides of the fuselage and these are cemented in separate pieces across the edges or the formers to give the poly-sided effect to the structure. The lower sides are continued just forward of F1's position, for trimming to length when this former is added later. The top and bottom of the fuselage are left open and the left half is now removed from the plan, ready to receive the right-hand sections of F2 to F5..." 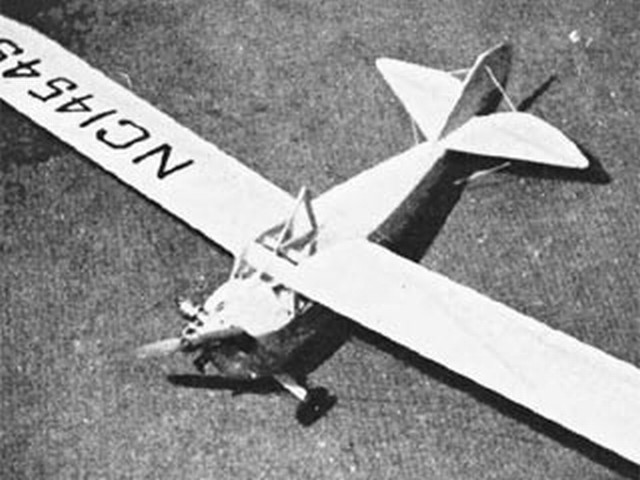