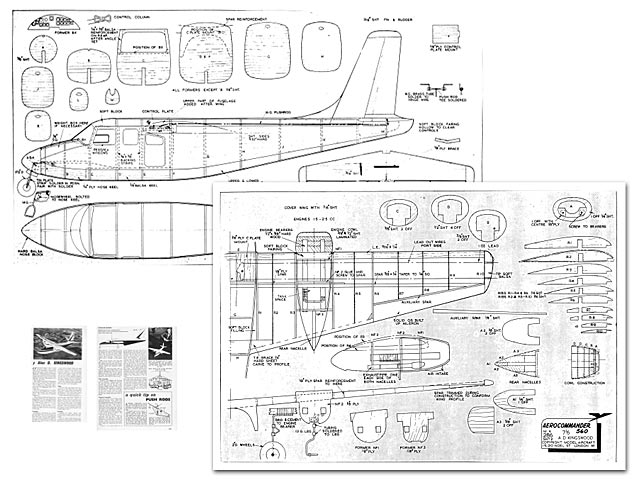 Quote: "ONE of the few light twins on the American market with a high-wing, the Aero Commander is produced in 560 and 680 super versions, by the Aero Design and Engineering Co. of Bethany, Oklahoma. A good-looking five to seven seater, it is powered by two horizontally-opposed Lycoming engines and its only detraction from the conventional is its swept fin and rudder.

The machine is in use in many parts of the world. Performance capabilities have been shown by a non-stop trans-USA flight by a 680 super and a non-stop single-engine flight from Oklahoma City to Washington DC by a model 560.

The Aero Commander 560-A serves in the USAF as the L-261I VIP transport and the 680 with the US Army as the L-26C. One is also used by President Eisenhower.

The model was produced from factory drawings supplied by Aero Design and Engineering. It was originally powered by Mach-1 engines in an effort to find the minimum size model for two 2.5s and was overpowered as a result. Consequently, a pair of good 1.5 cc engines should do the job well, or even maybe two A-M 10s if the construction is kept light.

Fuselage. Commence construction by cutting and assembling the nose keel from 1/4 in ply and balsa. Form the nose-wheel leg from piano wire and, not forgetting the brass or tinplate reinforcement soldered in position, securely bolt it in place on the keel (the wheel should be inserted during bending).

Cut all the formers from the wood specified on the plan, and cement A, B, C, D, E, and F to the keel in their respective positions. Cut the fuselage sides from hard 3/32 in balsa sheet and cement into position, taking care that the tail end comes together properly.Cement the rest of the formers between the sides, making sure the fuselage is true about the fore-and-aft centre line..." 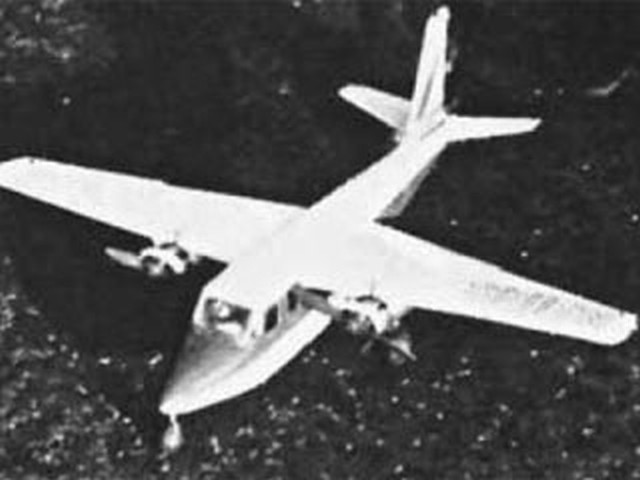