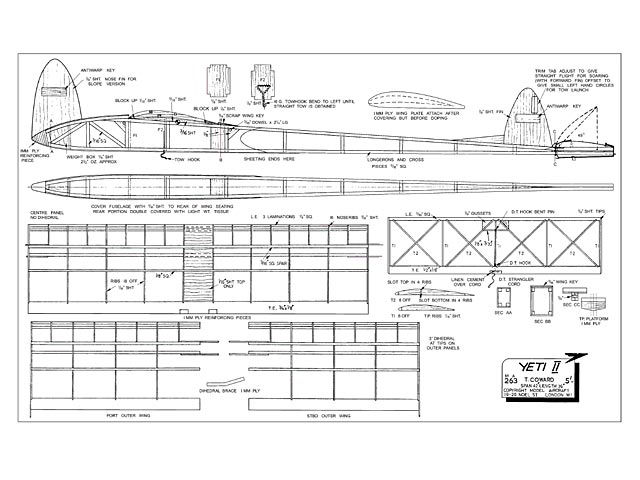 Quote: An A/1 glider for slope or tow launching. Yeti, by T Coward.

The A/1 glider is very popular on the Continent as a beginners' class and as a stepping stone to A/2's. Although Yeti is easy to build, it has more than a beginners performance as was shown at last years' Epsom Slope Soaring meeting held at Box Hill, which it won with two flights of 1:44 and 1:46 OOS respectively.

Wings. These are quite straightforward as they were designed with simplicity and speed of construction in mind. The ribs and riblets can be made by using the sandwich method, ie pinning the required number of pieces of 1/16 in sheet together to form a block and sanding it to the aerofoil section. Use hard 3/16 in sq for the spars as they take quite a strain when towing up. The leading edge should be built up on a flat board from three pieces of 1/8 in sq and it must be allowed to thoroughly set before being built into the wing.

When covering the wings, the tissue can be folded over the end rib and pasted on to it, but before water shrinking or doping is started the endplates must be firmly cemented on to the end ribs, as these prevent them buckling when the tissue tightens.

Fuselage. The basic construction is a box formed from 3/16 in sq. Two sides are built on the plan; building one over the other ensures greater accuracy. They are joined together at the wing seating by the formers, the towhook having been previously attached to F2. When this is set, the two rear ends are brought together and cemented face to face for 3-1/2 in. It is very important that the fuselage is absolutely straight as the moment-arm is longer than normal and a slight bend in it will give trouble when flying..."

Update 18/03/2016: Replaced this plan with a clearer copy (patterned background removed) thanks to TonyP. 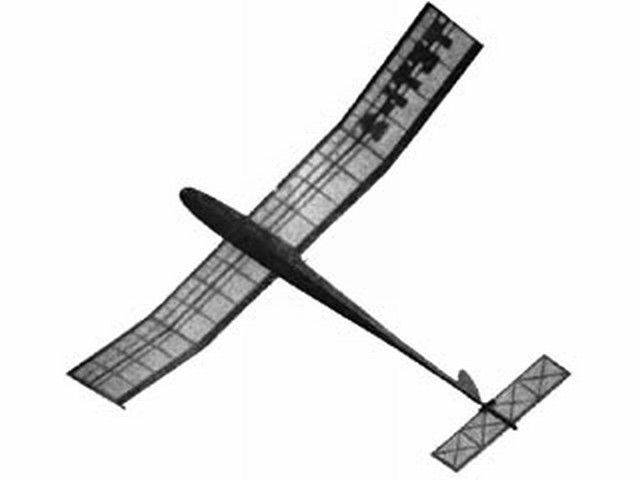