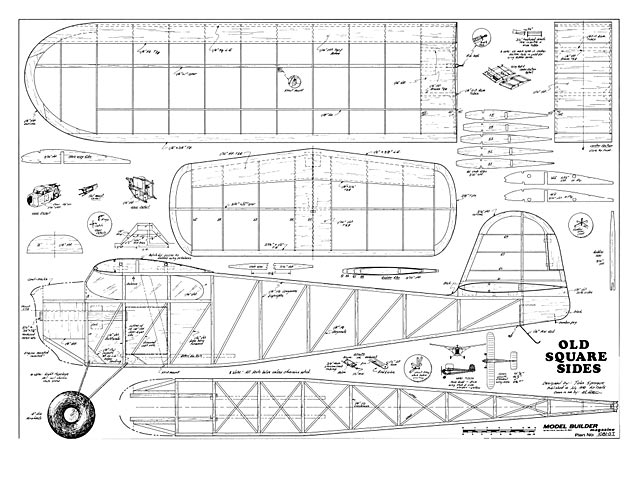 The model section in the July 1940 issue of Air Trails started on page 29 (oh yes, all the US model magazines contained many articles on full-scale aviation, though most of the advertising support came from the model industry). The inside cover (sound familiar?) shows a group photo of the Oklahoma City Gas Model Association, 22 members present, with their aircraft spread out in front of them. Zippers dominate the scene, with Mercuries and Clippers making it a strong commercial for Comet. There's also a Custom Cavalier, but not one single radio antenna!

Turning the page, we find a construction article for Louis Garami's two-foot-span gas job, the Half-Pint, based on the Mighty Atom engine. One photo shows Louis carrying the disassembled model in a paper bag.

Model Matters occupies pages 32 and 33, featuring 'The Dope Can', by Gordon Light. Photos show Sal Taibi with his 'latest job'. Perhaps the Hornet is unidentified because Model Airplane News got the construction article! (Our OT of the Month in the August '81 issue.) Also shown is Bruce Lester, a regular photo contributor to "Plug Sparks", with his 10-foot span glider powered by a Brown Jr. Yes, Fred, a powered glider! Is there nothing new? Another photo shows two of Elbert Weathers' classic controversial landing gear-dropping 'Mystery Men'. And next, a gas model that flies on the end of a string (no, he didn't say G-string, he said 'G-Line'), and the name is Victor Stanzel, and U-control has not yet become a commercial name or product!

The next three pages contain a construction article for the 1939 Open Class Flying Scale event at the Nats, Henry Thomas' Rearwin Speedster - followed by solid-scale 3-views of the Spitfire, by Martin Dickinson.

Following full-size plans for a classy-looking ROG design by HA Thomas, we come to our OT of the Month, 'Old Square Sides', by John Sprague.

Isn't it funny? Even in 1940, modelers were looking back at designs from the 'good old days'. With the Zipper leading the trend toward high performance and away from full-scale aircraft appearance, some modelers were reminiscing about the days of cabin models with windows, 'square sides', V-dihedrals ... realism. You could almost believe that John Sprague sat down at his drawing board and said: Not only am I going back to the good old-fashioned model - I'm also going to come up with a design that will be perfect for OT radio control about 40 years from now. Boy, did he ever!

If OSS has any faults, we'd have to say that some of the structural problems were solved the hard way. But as usual, we present the plans as they were done originally, leaving the choice of modifications to the builder. Modern materials and adhesives have simply changed the ways we do certain things.

In typical OT fashion, no balance point is shown on the original plans. With its flat-bottom wing section and symmetrical stab, we'd suggest starting at 30% to 1/3 back from the wing's leading edge. And with that short nose moment, better watch your construction weight toward the aft end, or a bunch of free-loading 'tail lightener' may have to be stuck inside the cowl.

If you're thinking about flying off water, take a look at the scaled-down OSS on floats in last month's 'Sport Scene' column. Looks like it just emerged from the Canadian bush country." 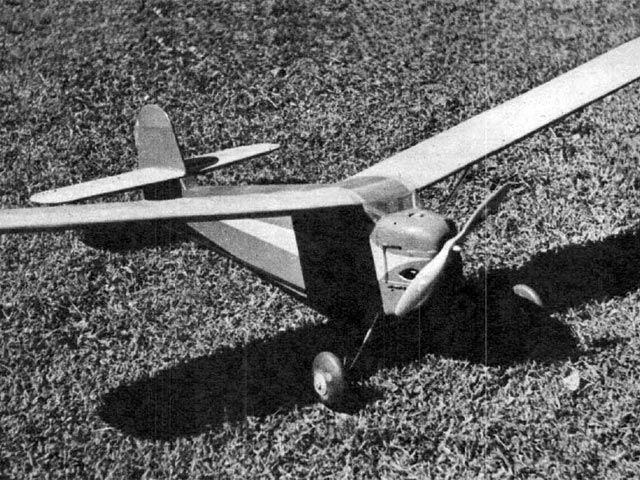