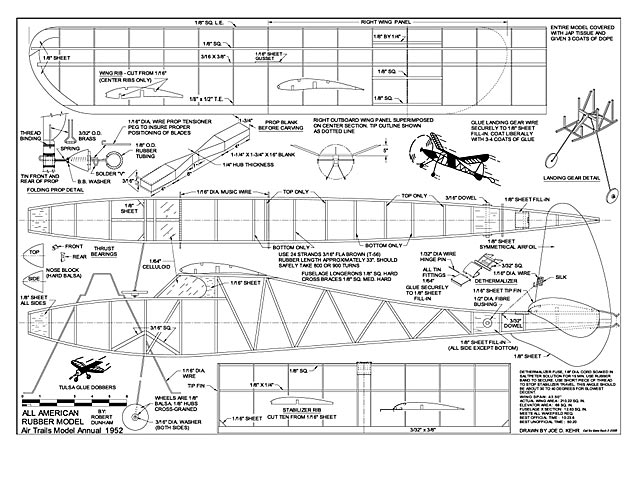 This is a modern redrawn plan in PDFvector format by Gene Rock.

Quote: "After competing in three Nationals with cabin models employing a diamond fuselage design, we thought that a change was in order. The main disadvantage of a diamond type fuselage model is found in the mounting of the wing. It is necessary to use a wire birdcage arrangement or a drag-producing, difficult-to-construct wing platform. To eliminate this it was decided to employ a slab-sided cabin, somewhat resembling a full-scale airplane.

Plans were drawn for a model using the same airfoil, and force arrangement of lifting surfaces, as on the previous diamond fuselage model. The results were most gratifying as dead air flights resulted in times close to three minutes' duration. At the National Meet, the day for this type of model was windy and overcast. Despite this, two out-of-sight flights were made, the model being lost in a field on its last official. Total time of three official flights was 10:23.6. The plane was later found and returned undamaged. While re-testing, the ship hooked a slow rising thermal and flew for 50:20, coming down about four miles from the launching point.

It is still in excellent condition. Due to the plane's simplicity of construction, many of the younger inexperienced fellows in the Tulsa area have built and successfully flown this model. No special tools or materials are needed.

The two fuselage sides are constructed on side view, one over the other, to insure being identical. The four main longerons should be 1/8 square hard balsa, cut from same piece to produce even bend-ing when drawing front and rear together on the top view. The truss-like construction aft of wing results in a strong, lightweight fuselage. The sheet balsa fill-in for the nose, window, landing gear, and rear dowel anchor are then added. Cement a 3/8 diameter fiber bushing at anchor dowel posi-tion. Don't forget wing mount wire or the 3/32 dowel peg to hold rubber band which pulls tail section into the dethermalized position..." 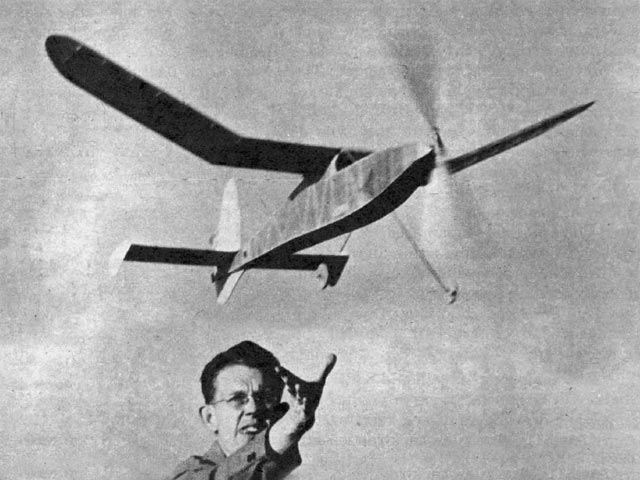