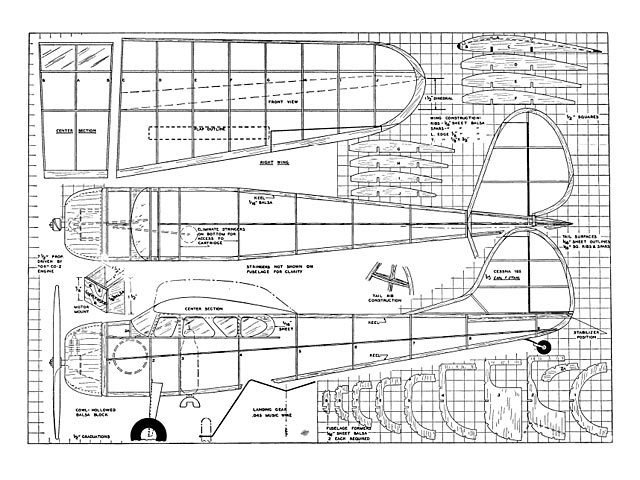 AMONG the widely used executive-type planes is the Cessna 195. Its purchase price of nearly fifteen thousand dollars keeps it from most private plane buyers, consequently many of the 195's are owned by businesses, which require the swift, comfortable transportation it provides.

From most every point of view the 195 is a remarkable craft. With a cruising speed of over 165 mph and a luxuriously outfitted cabin, it matches many air liners for speed and comfort. Pilots like the 195, for it flies with the ease and safety of most light training planes. Equally important, is its ability to operate from the smallest airports, thus making it possible to take the ship just about anywhere a plane can safely land and take off.

The Air Force has recognized this ability to fly from restricted areas and has purchased 195's for rugged Alaskan duty. For service of this kind, wheels are interchangeable with skiis and floats.

Capturing the attractive appearance and good flying qualities of the prototype, this model will more than compensate for the time and effort required for its construction. An OK C02 expansion-type reciprocating engine was installed in the original model, but the design may easily be altered to utilize rubber strands or a small gas engine for power. In any case, work carefully, using the plans and text as a guide, and your model 195 will surely take to the air as readily as a duck takes to water.

Conventional model construction practices are used throughout. Balsa wood is required for most parts and the various members are fastened together with fast drying, colorless cement.

Many assemblies can best be built right over full size drawings so the first task is to double the magazine-size plans. To do this, step off each dimension twice using dividers. Where curved parts are shown, one-half inch grid is imposed on the magazine page to speed the job and increase the accuracy.

The fuselage is a simple yet strong structure. Four keels (two side, a top and bottom) are cut to shape from 1/16 balsa sheet and then the 1/16 thick formers and 1/16 sq stringers are added. All parts are medium grade balsa except the stringers, which are hard balsa. Assembly is accomplished most easily if the top and bottom keels are pinned to position over the enlarged drawing; half formers and a side keel are then attached. Once this structure is dry, it is lifted from the jig and the remaining parts attached. Forward of former No.1, a 1/4 thick bulkhead identical in diameter to former No.1 and radiused as shown is attached. This member retains both the motor mount and cowl.

Before the cowl is cemented in place, it would be best to install the OK C02 engine. Bolt the engine to the mount. Then cut a notch in the solid bulkhead to pass the pressure line. The cartridge holder is sewn by needle and thread to former No.3, off set from the center line, as shown, to by-pass the bottom keel..."

Update 09/01/2019: Replaced this plan with a clearer copy, thanks to Pilgrim. Re-stitched from higher res scan bmp files available at http://www.theplanpage.com/esp.htm many thanks to GTHunter. 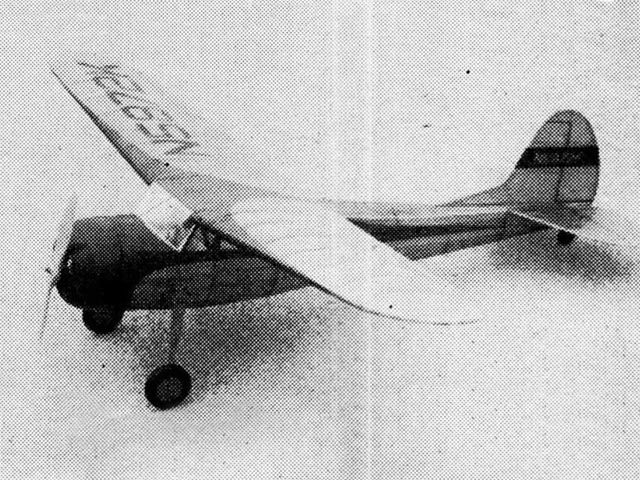