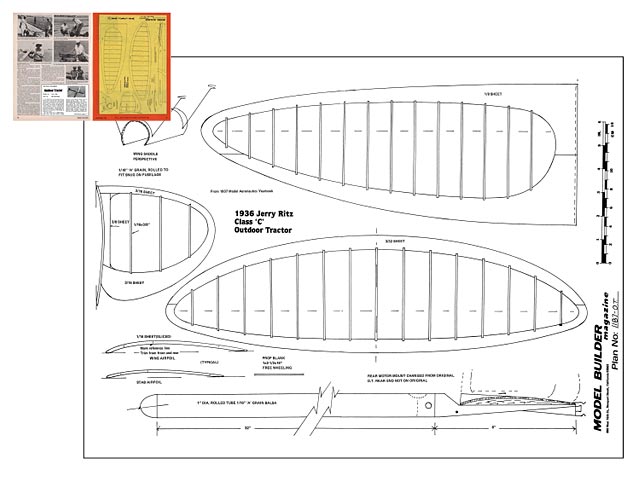 Text by Bill Northrop. Our Old Timer for November '87 was drawn up from Frank Zak's 1937 Model Aeronautics Yearbook by Frank Blair, of Warne, North Carolina, who also built the model in the photo [more pics 005]. Designated the '1936 Outdoor Tractor' it was one of numerous designs by the late Jerry Ritz (Gerald Ritzenthaler), and possibly one of the first, to feature his 'Ritz Wing,' as it became known.

The Ritz Wing was a single-surface, sheet balsa wing from which a large amount of the interior surface was re-oved, leaving a wide but thin eading edge, trailing edge, root, and tip. Thin, indoor-like, constant depth, undercambered ribs were then notched into the sheet surface. The planform was usually a beautiful single or double elliptical shape. The Ritz wing was later used by other modelers, probably the best known example being Scotty Murray's beautiful Answer (oz3).

Jerry was also the first to produce machine cut gas model props, offering unfinished ones for 15 cents, and finished for 25 cents. They were included with most Comet gas model kits.

In 1959, Jerry won the individual World Championships for A/Z Nordic, in Belgium, bringing the team up to fifth place.

We're not sure of the date, but not too many years ago, Jerry lost his life when a structural failure occurred while he was flying an ultralight of his own design." 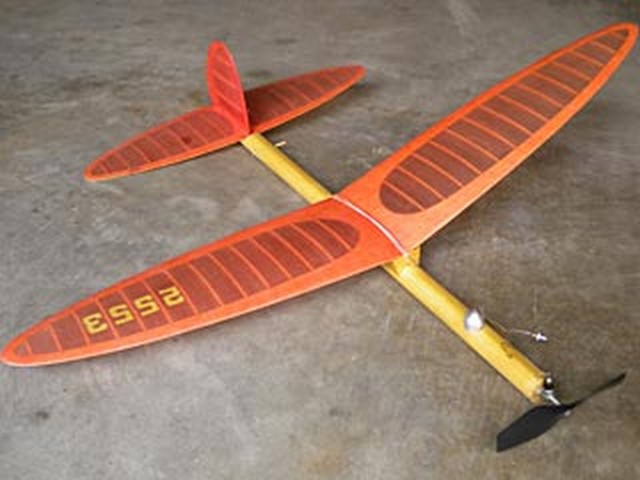 Colour photos of his completed Outdoor Tractor model are thanks to SteveStaples. Quote: "1936 Outdoor Tractor - converted to a Brown 100 Co2".
SteveWMD - 14/11/2012
Add a comment