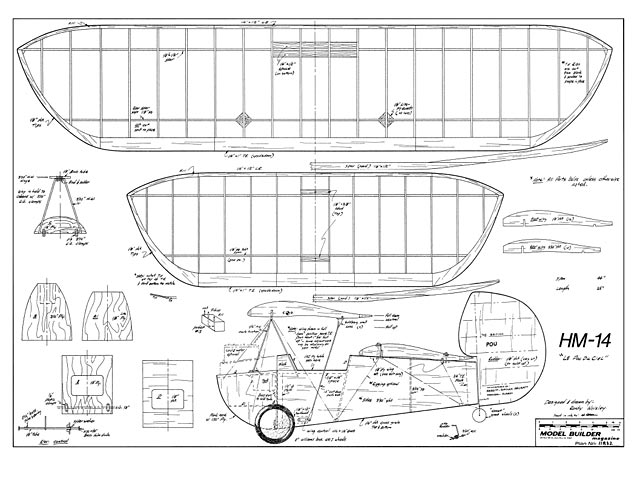 Quote: "Pou du Ciel (the Flying Flea), by Randy Wrisley. Whether you call it Pou-du-Ciel, Flying Flea, Sky Louse, or HM-14, it's still an attractive 'bug' of an airplane. Originally designed in 1934 by Henri Mignet, hundreds of 'Pous' were built.

I guess I'm just one of those guys who roots for the underdog. I built this scale model of the HM-14, just to see if all the horror stories I had heard about it were true. Using my junkiest engine, and oldest radio, I proceeded to construct what you see in the pictures in two days!

Boy, was I surprised when this little bug flew so well! It's stable and easy to fly. It's a pussycat on the ground. When I tried to get it to tuck under, it would get to 90 degrees and stop. A touch of up elevator brought instant recovery, usually with a loop. Oh, by the way, I used Henri's original form of control, and pivoted the main wing for elevator!

My first trip out to Mile Square (a very popular Southern California flying site) had many of the regulars there worried. As I fiddled with my junky engine, the braver modelers would walk by and ask if it had flown before. Most were amazed when they saw the wing pivot. As I walked to the runway for the 'first' flight, modelers moved their belongings to the shelter of their cars for safety.

The little Flea ran arrow-straight down the runway, hopped into the air, and made several happy circuits of the field. I took it up a ways and let a friend fly it who had no time on powered models, only gliders. He had a ball! Like its full-size counterpart, the Flea won't stall in normal flight attitudes, and it won't spin. Needless to say my buddy had no trouble! When the engine quit, I glided down to a perfect landing and was surprised to hear a round of applause! Hurrah for the underdog!

As you gather the materials to build yours, you should be aware of two things. First off, keep the tail light. Finally, don't be tempted to over-power it. It flies just fine at 32 ounces with an Enya .09, swinging a 9-4 plastic prop. Read on McDuff, and we'll build yours.

FUSELAGE: Select a soft piece of 3/32 by six inch balsa. Carefully cut two sides to shape. Don't mark on the aft ends of the sides as they will break when you try to bend them. Cut the formers from the material indicated. Install the 1/8 x 1/2 inch bearing blocks for the joystick, and drill the 5/32 holes for the brass tube before you assemble the structure. Bend up the cabane struts from 3/32 music wire. Attach it to former C with Sig landing gear clamps. The 1/8 inch landing gear wire is also held in place on former B with landing gear clamps.

Assemble the fuselage by installing former D. Pull the tail together and Hot Stuff it lightly in a couple of spots..." 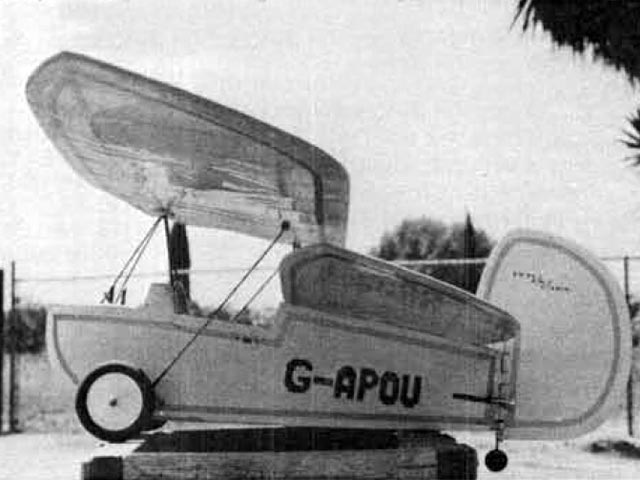 Hi Steve & Mary, I bought this model at a swap meet in Detroit in 1994 and the photo was taken on the Ribcrackers flying field [more pics 003,004]. The Pou flew very well, but I had problems with the undercarriage which would bend every landing. I had the great idea of replacing the piano wire with larger diameter stainless steel wire. It didn't bend, but instead punched upwards into the fuselage like a knife through butter. I would therefore advise anyone building this model to provide some kind of shock absorbing to the axle.
Chris Pinn - 25/03/2020
Add a comment