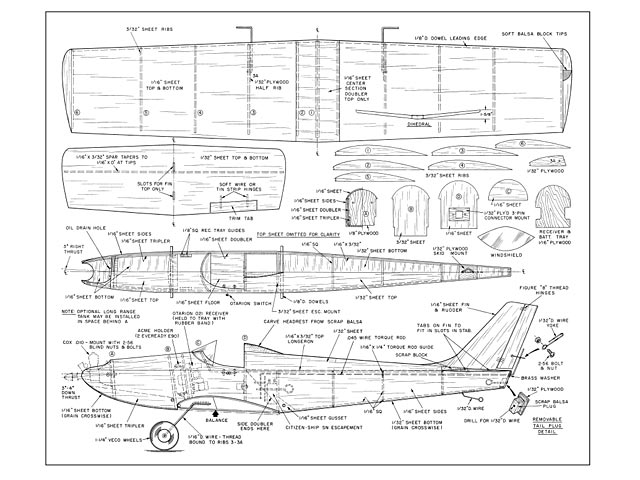 Quote: "A ballpark-size radio control low-winger with a lot of forgiving features, this diminutive darling will surprise you with its steady flight and sturdy construction which resists rough landings. Lil' Roughneck, by Aubrey Kochman.

Once .01 powered R/C models proved to be an ideal fun ship, their popularity spread like crabgrass. As is the case with any comparatively new class the best all-around size and configuration isn't quickly settled upon.

We have witnessed flights of these mini-ships with as little as 12 in and as much as 36 in spans. In our opinion the 12 in jobs were too hot to handle while the 36 in models were definitely underpowered. Unless you are interested in flying either the largest or the smallest .01 R/C in the world we see little attraction in either extreme.

From past experience, we have learned that .01 models have extremely poor ground handling characteristics. ROG (rise-off-ground) take-offs are usually a matter of luck. Unless very smooth runways are provided, landings - right side up, that is - are also uncertain. Ground loops or cart wheeling can be the rule rather than the exception. Even a perfect approach and touchdown can't guarantee a smooth landing. A wire skid would probably be the best answer, but our asthetic values ruled against it. As you can guess we feel a trike gear is of little value in so small a model. Therefore we use a two-wheel wide-track gear. And the extra weight of a nose gear can be put to better use by beefing up the fuselage front with additional lumber.

Silk covering was ruled out as too heavy while tissue has always seemed to us to have an affinity for tough weeds that can make Swiss cheese out of most any airframe. Although weed-proof, the single-surface sheet balsa wing at best is pretty flimsy so it, too, was ruled out. Not much left to choose from, so we settled on a double-surface sheet balsa wing (which is our favorite anyway). So look out weeds - here we come!

In our design approach to Lil' Roughneck we have attempted to lessen the jump these small models make when entering and recovering from a turn. To accomplish this we lengthened the tail moment to gain longitudinal stability and reduced wing dihedral to an angle which proved a good compromise as far as lateral stability goes. Construction-wise, this model is rugged enough to take it when we miss the weed patch and has been found to be practically warp-proof. Once flight trimmed, Lil' Roughneck will prove a consistent flyer which is as it should be for a model designed primarily for fun flying.

Our completed model, painted and ready to fly, weighed in at just over 6 ounces. To match this weight it is very important that you spend a little extra time at the balsa rack and choose your stock wisely.

The wing, which is built in halves and joined together glider fashion, is more easily formed if 6 in wide stock is used. Choose straight grained medium soft balsa sheets. We used Sig contest balsa. Cut bottom sheets to outline shape. Cut all ribs from 3/32 soft sheet and cement them in place. Add 1/8 dowel leading edge. This dowel greatly strengthens the wing and guards against leading edge knicks and cracks. Its weight is practically negligible so don't leave it out..."

Quote: "Here is Aubrey Kochman's Lil Roughneck from American Modeler issue 11/12-63. It is suggested in one online discussion to double the rudder area, as yaw control (lack thereof) was an issue with this model".

Quote: "David Boddington reviews a kit model and offers his very useful tips. THE American kit manufacturers have produced many small all sheet single channel R/C models and these have proved to be very popular on the home and foreign markets. It is surprising that no British manufacturers have produced kits of this type considering the sales potential - perhaps this will soon be rectified.

Manufactured by Sterling Models USA, the L'il Roughneck has clean and complete die-cutting of parts. For .01 and .02 engines. Wingspan 22-1/2 in. Length 20-1/4 in. Price in this country 47s 6d. Imported by Roland Scott.

The L'il Roughneck has plenty of eye appeal and has very much the appearance of a small Orion (oz927). The original was designed by Aubrey Kochman specifically for flying from small rough fields where a normal tissue covered model would be likely to suffer minor damage. The design is only suitable for subminiature receivers (ie Otarion, Kraft KV3K, etc) and single lightweight escapements.

L'il Roughneck is advertised as being suitable for beginners but I have reservations about this, it could be quite 'nippy' in flight - but more of this after the flight tests. With the import tax on American goods their kits are bound to be relatively expensive and the retail price of 47s 6d is on the high side for this diminutive model, especially considering the kit is dry and no wheels are included.

The plan is clear, the sketches of method of construction and the written instructions are most comprehensive. The balsa is all even graded well matched and of excellent quality, although it is possibly on the heavy side for some of the components. Die-cutting of the balsa parts was clean and reasonably accurate, but the plywood required a small amount of additional cutting. The landing gear is pre-bent and there are ample materials supplied.

Anyone having a liking to building small models should certainly enjoy putting this one together, parts fit together with very little trimming needed. Building is easy and fairly foolproof, some parts because of their size have to be handled carefully, and a modeller with experience in constructing one or two previous models should have no difficulties.

One thing not mentioned on the plan is side thrust, but I would suggest that 2-3° right side thrust will be needed to counteract torque.

It is essential with small models to keep them absolutely as light as possible or their flying characteristics will deteriorate rapidly with increase in wing load; to this extent all lightly stressed areas (ie wing sheeting, fuselage rear end and tailplane, etc) should be well sanded. Decoration also should be kept to a reasonable minimum, if a grainfiller is used make sure it has a lightweight base such as talc and that it is very well rubbed down before fuel proofing..." 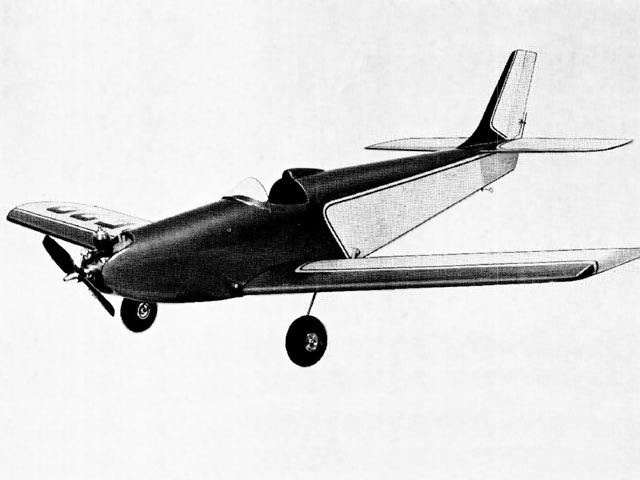