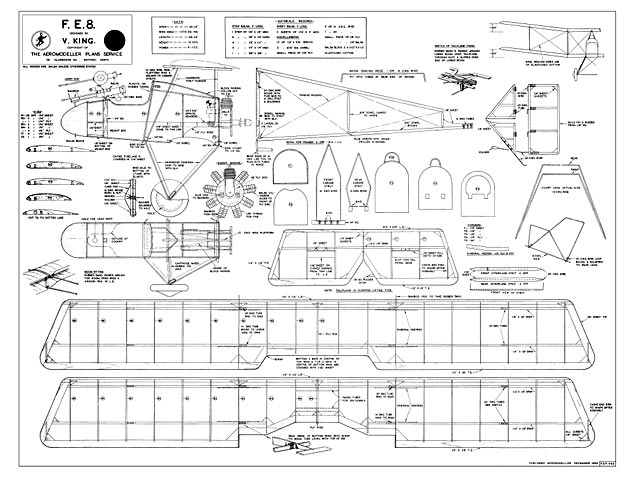 Quote: "A PUSHER model is not everyone's choice, and a scale pusher is one of the most difficult selections it is possible to make. The reason for this being the need for so much nose ballast to compensate the engine weight, that wing loading becomes too high for reliable flight. But if the model is relatively small, this difficulty is minimised to a great extent, and in choosing the famous FE.8 and building to a scale suiting his Mills .75, Vic King has proven that the pusher can be as realistic and reliable an old timer as any could wish to see.

Few can grumble at its 14-1/2 ounces for 350 sq in wing area, a far more generous loading than we find on many a conventional scale model, and the hundreds that have been fortunate enough to witness the prototype's flights at Fairlop and thereabouts will verify that here's a model that definitely carries the air of 1914-18 about it.

The full-size aircraft has been magnificently portrayed by artist Rupert Moore on the cover, to give builders as accurate a colour guide as possible, and in 'Hangar Doors' Mr Moore writes further on the subject. The FE.8 was produced in company with the DH.2 to combat the Fokker Scourge, and gave a very good account of itself during its ten months of front-line service. Fokkers were using interruptor gear to synchronise machine guns firing through the airscrew; but with the engine at the rear, such a device was not necessary, hence the series of pusher Scouts, before we developed the synchronised gun.

Construction. Cut the fuselage sides from sheet, add formers, cement in engine bearers and cover top and bottom with sheet. Insert wire struts then cut outline of cockpit. Wings are perfectly conventional, except for the brass tube fittings which must be packed to protrude just outside the wing contour.

Unfortunately the tailplane had to be altered slightly from true scale in that it is placed on the model in the inverted position to provide a down-ward lift. Its construction, like the rudder and fin halves, is perfectly straightforward. Make certain that the pendulum rudder will swing freely, and that movement is limited by the stop and also by the pendulum arm on the fin.

Good quality spruce dowel is essential for the booms, which should be glued together and not cemented. It is most important that the brass tube at the end of the boom receives the wire spacing piece smoothly. At the forward ends, the booms are connected to the wings by the tube fittings, and a securing elastic band goes over the top wing as shown..."

Quote: "Here is Vic King's FE-8 from Aeromodeller issue 12-52. This full size plan scan was a very aged blueprint style drawing. It was by far the dirtiest I have attempted to clean. I like the CAD redraws of these oldies but I like seeing the original draftsman's work with a few 'fuzzies' here and there!"

CAD redrawn version of this plan in PDFvector format, thanks to hogal. Article page scan is included in the planfile. 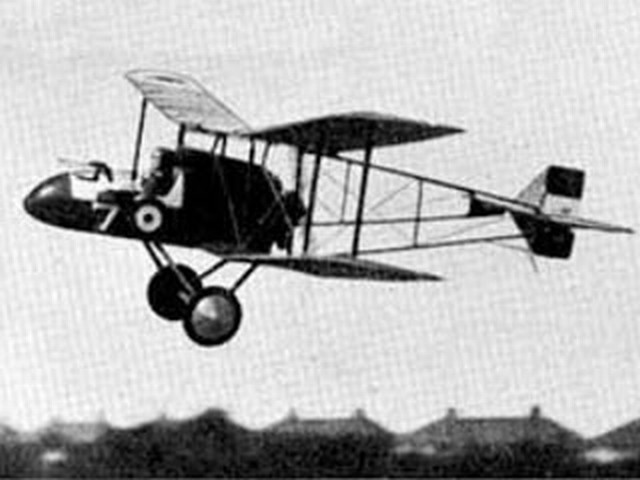