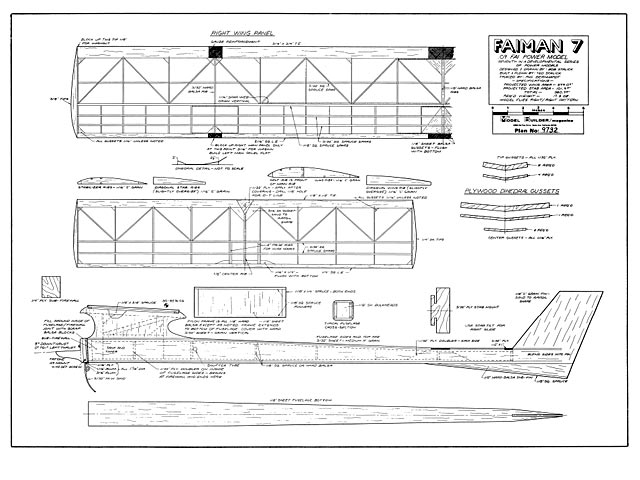 Quote: "The beginner will like this ship for its easy and inexpensive construction, and the expert will like it if his favorite FAI bird hooked a thermal and went 00S just before a big contest. FAIman 7, by Bob Stalick.

The FAIMan series began 7 years ago as an attempt to design a model that would be non-critical, simple to build, and easy to fly - but yet would be competitive in the FAI power battles of the day. Additionally, the model would have constant chord wing and stab, and box fuselage with wood sizes standardized to minimize unused materials. Geodetric surfaces were utilized to maintain airfoil integrity. Bob Cherny's 9% Orbiteer airfoil would give a high speed climb, and a high aspect ratio wing (9.5 to 1) would provide a better-than-average glide.

These parameters were built into FAIMan I and II. The original model is still flying (albeit with some rebuilt parts), and it is still winning. It won first place in the Northwest Semi-Finals in September, 1971 by scoring 7 maxes and a 127 second flight. It flew at the Caddo Mills FAI Finals in July of 1972 and was lost 6 miles downwind of the launching site during the 8th round. It wasn't located until that evening, so its claim to a high placing in Texas was not to be.

At this point in time, the series has come full circle from this early FAIMan detailed above. Following this simple no-nonsense model came FAIMan III, which had a 10 to 1 aspect ratio wing, auto-rudder and tapered wing and stab; then the ill-fated FAIMan IV, which never flew; FAIMan V, which was equipped with auto-everything, tapered wing plan-form, Rossi engine, etc.; FAIMan VI, which was just completed this spring, and has a completely sheeted wing and auto-everything.

Now comes FAIMan 7. Its purpose is to satisfy the enthusiasm of my junior age-group son, Ted, who has had some good contest experences with 1/2A and feels he is ready to move to something bigger. Having a good Cox .09 for motive power was the basis for const-ructing number 7. It is a simple ship for the modeler with limited experience. The only difficult parts are the metal work around the firewall and the fibre-glass cloth application. Because a model this size (it would be an average sized 1/2A) could be very hot to handle, the airfoil thickness was increased to 10% and the stab area upped to 37%. The result is a reasonably 'goof-proof' model that can perform respectably in the hands of an FAI neophyte. Especially important for a beginner is its reasonably low-cost (in comparison to the all-out super FAI competition models.)

The plans are self-explanatory, with a few exceptions. Taking these in order, they are:

WING: The wing is completed, including covering, before building anything else. Notice the leading edge shape - this is important. Also don't leave out the plywood gussets or the stated wash-ins and wash-outs. All construction uses epoxy or Titebond. Cover with silk put on damp. Apply one thin coat of clear dope over the entire covering, then brush on a coat of Knox Unflavored Gelatin and water (follow directions in the Knox package). This one process will save you four to five coats of dope and around an ounce in wing weight. After the gelatin has dried thoroughly, finish doping as usual..." 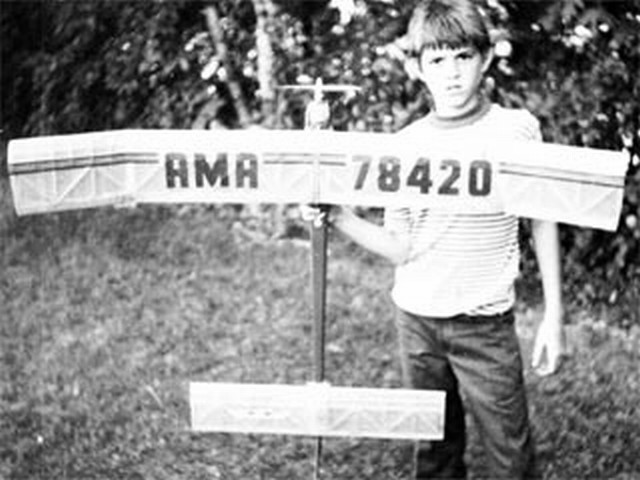