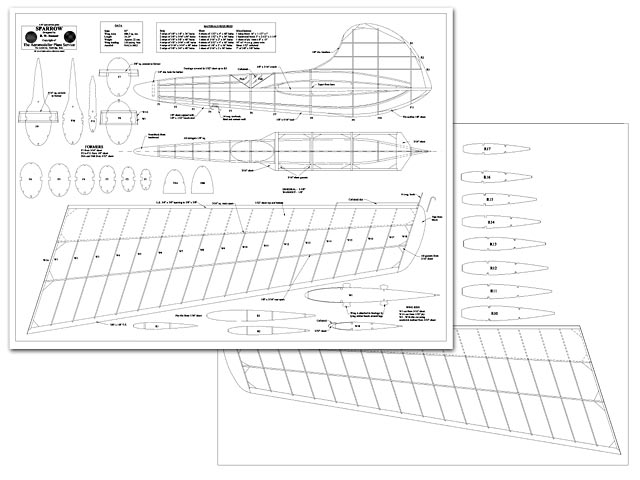 Quote: "This interesting and unorthodox post-war German design is the second of its type to be produced by Reinhard Roeser. Basically the same as that which we now present, the prototype was of all-ply construction, rib capping-strips being of drawing paper. As would be expected, this model was considerably heavier than the balsa version and its gliding capabilities were less. Designed primarily for slope-soaring, the first Sparrow had a fast sinking speed.

On a normal tow-line, instability was somewhat marked, but towing became practicable by the use of the LSARA Rolling Bobbin and tow-hooks at the wing tips. For those readers who are not familiar with this method, it should be explained that the tow-line terminates in a bobbin through which runs another line with ring at either end. These rings attach to the tow-hooks on each wing of the glider aml, should it slew to either side when being towed up, the bobbin runs along the line and the tow pull has the effect of righting the model in its flight-path.

The designer warns intending builders that a .few test flights may be necessary before the handling of this type of glider becomes familiar. Glider exponents will, no doubt, be surprised to discover that Sparrow has the NACA 0012 symmetrical wing section, with its 12 percent thickness ratio, more usually found on control line stunt models.

Many readers will remember another interesting tailless of this type, although considerably larger than either of the above, which was featured in the 'Operation Research' article in May, 1950. This was the scale XFGI of 13 ft 6 in span by the Dynamic Model Unit of Dayton, Ohio. Dropped from a full-size aircraft, it was radio-controlled and carried a safety parachute for landing. From the data obtained, a full-size glider of similar layout was built and flown.

Complete instructions for building are issued with each full size reproduction of the 1/5th scale plan opposite, price 6/- post free from the Aeromodeller Plans Service. "

Quote: "Sparrow. A design for a tailless glider designed by one Reinhard Roeser. It is a large glider with a pod fuselage (one could hide radio in there). The drawings are presented in two because I have duplicated the opposite wing and the intermediate ribs, features that were often missing but which are really handy. Hands up all those that ruined a plan by putting oil on it to see through, oh the joys of childhood. As always with my plans please take care if you are going to use them." This is a modern redrawn plan in PDFvector format.

Article thanks to Pit. 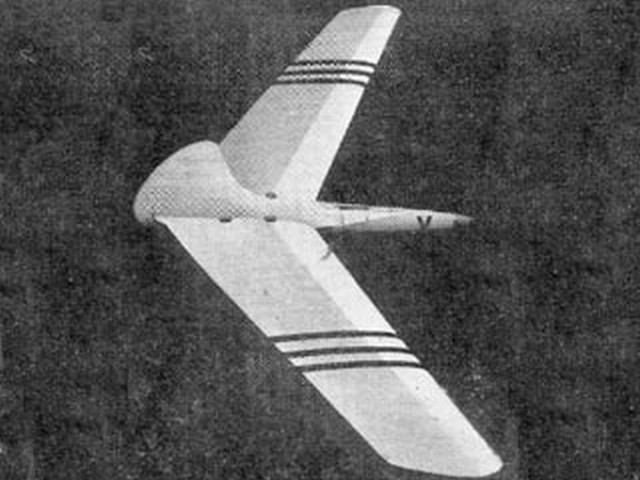 Yes, the correct CG is nowhere marked on the plans. I'm sure there is a formula out there to find it, but the simple addition an X would be greatly appreciated, I'm sure.
anon - 28/01/2014
How about adding something to indicate the center of gravity of this plane? Or at least include (somewhere!) the method for finding it.
bicyclerider - 01/02/2016
This drawing is all we have. It has no CG marked. Can only suggest you start by finding a copy of the orginal printed article and checking that.
SteveWMD - 01/02/2016
Yes, I agree. Not interesting to begin to build this unorthodox Design without having an exact C.G. mark.
GaetanPage - 01/02/2016
Hi Steve, this article [see supplementary files] does not clarify cg position but the model was similar or inspired by Cornelius XFG-1 from Jack Lynn Bale. The plan is on Outerzone here CorneliusXFG-1 in which is shown cg range position and could be a good starting point.
Pit - 02/02/2016
Without a balance point, the more fun for me!
BobTaylor - 02/02/2016
There have been several comments regarding the Center of Gravity location for the Sparrow. The last paragraph in the Sparrow article says, "Complete instructions for building are issued with each full size reproduction of the 1/5th scale plane ..." If those were available it would most likely give a CG location and flight trim instructions. However, as I'm an Aerospace Engineer I did some calculations and found the CG should be located at about 2.9-inches in front of the leading edge of the root chord. That puts it just behind Former F-6. I did the same calculations on the Cornelius XFG-1 mentioned in one of the comments. The calculated CG came up right exactly between the two locations noted on the plan. Maybe that information will be helpful.
JoeA - 04/02/2016
Add a comment