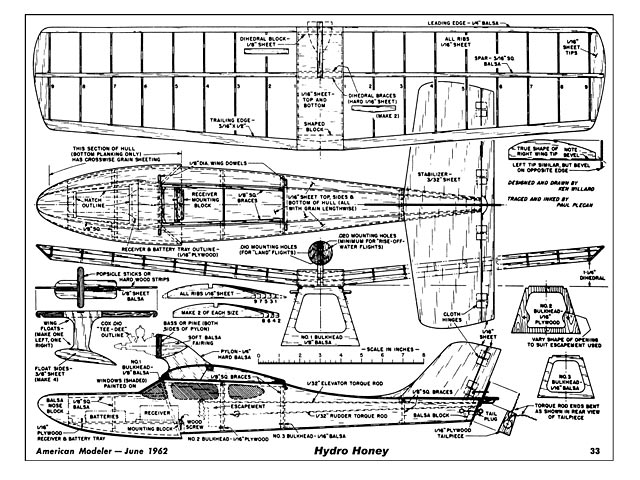 Quote: "Hydrohoney was the result of a very unusual challenge by my friend Jack McCutcheon. Jack lives up in the hills near San Francisco. His neighbor, a retired contractor, has a little man-made lake in his back yard, 150' long and 80' wide, with a big tree overhanging one side. There is a beautiful party pavilion on the end. The sides slope up from the lake about fifteen feet, so the whole setup is a sort of oversized bowl of broth with hazards all around. Says Jack, "Let's see you make a radio controlled seaplane that can take off from the lake, fly around and land back on that water!"

I looked at the small pond, the big tree, and that expensive expanse of glass in the party house - this was quite a deal! The model had to be small in order to maneuver inside the bowl, so I figured an .020 powered job would be just about right. I figured the basic hull design of my old Dreamboat would scale down all right.

First test flights were made at the Pioneer's flying site in Sunnyvale. I figured I had better be pretty darn familiar with the model before I tackled that lake. The job flew very well, and I could see that it had plenty of power, so with a few practice flights with radio under my belt, I went up to Jack's and we tried the lake.

The first seven or eight tries were failures. Every time the model got up on the step and started to skip along, for one reason or another the wing tip floats, first on one side then the other, would dip into the water and spin the model around. I was about ready to give up, even though it was apparent that I had plenty of power, when I got an idea. I took the wing floats off and tried again. This time, at the start of the run, the left tip of the wing dipped in the water, but as the speed picked up, the tip lifted out, and away she went.

Hydrohoney skipped over the water to the middle of the lake and then lifted off just as pretty as you please with the water dripping off the hull as she climbed - right towards those plate glass windows. I let her go until she was about twenty-five feet from the house and ten feet off the water, then pushed right rud- der. I knew the turning radius was good from the test flights so as soon as the model was headed away from the house, the next obstacle was the grassy bank, and the model wasn't quite high enough to clear it, so another tight right turn and she was headed right back towards me. Now everything was under control insofar as obstacles were concerned so I let the model climb on out, then flew it around until the engine quit, brought it in over the side of the lake away from the party house, and landed. Hydrohoney was a success.

Since then a lot of flights have been made. With a larger body of water it is one of the greatest little seaplanes for having fun that you'll ever build. And, of course, you can always fly in over grass. It skids in on the grass very smoothly—much better than small landplanes with their tiny wheels which get caught in the grass and cause a noseover..." 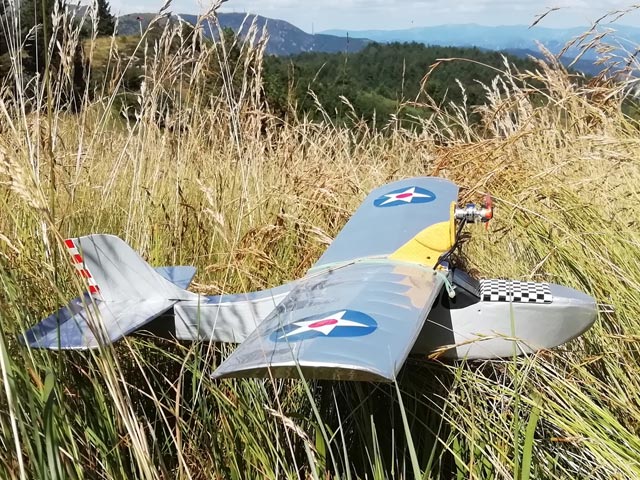 Hi Mary, Hi Steve, hope everything's ok, despite heat waves pandemics etc. Thought you may like some pictures [main pic, 003-006] and a few words about this model.
As a teenager, a great deal of my weekly budget was allocated to buying balsa, glue, gas and magazines. I was always looking forward to the day RCM would hit the newspaper stand. My English at the time was mediocre to be optimistic - but every month, as I weared my fingertips on the dictionary paper, I was able to gain some understanding (or misunderstanding) of my favourite column, Ken Willard's "Sunday Flyers". I loved the smile and the witty prose of that unmistakably American guy, sort of a good grandfather from some movie; loved the planes he designed, his signature rudder shapes, and his personal approach to modelling: no competition, going fast, or precision aerobatics; just the sky, the little plane, and quality free time for yourself, friends, family. He influenced, for sure, the modeler I was to become.
For some reasons, no KW’s design ever made it to my building board. Not in my teen years, nor in the last 10 years of modeling after a 25 years gap. In early 2021 I felt it was time to pay my dues. Then on Outerzone I found all my boydays dreams, ready to download and print. I elected to start by a simple, small, attractive design. I’ve never built a flying boat, so let it be a flying boat.
The Hydro Honey is simple and straightforward to build. I resisted the temptation to modify the primordial and hand-drawn airfoil with a new, fancy one. She flies well all the way. I’ve even sloped her, flying for minutes without the engine. Not flown on water yet, but maybe one day. Ribs are made with the packet method. During the quarantine I could not supply balsa, so a mixed balsa-depron structure was used. The vertical fin seemed a bit small to me, so I’ve enlarged it a 10%. I’ve enlarged the rudder surface even more, but I’m tempted to rebuild it even bigger, to gain some directional authority. And the dihedral could be reduced a bit.
Well, I made a short story long - as usual. Hope you enjoy my photos anyway! All the best, from Genova, Italy,
Raffaello Bisso - 23/08/2021
Add a comment