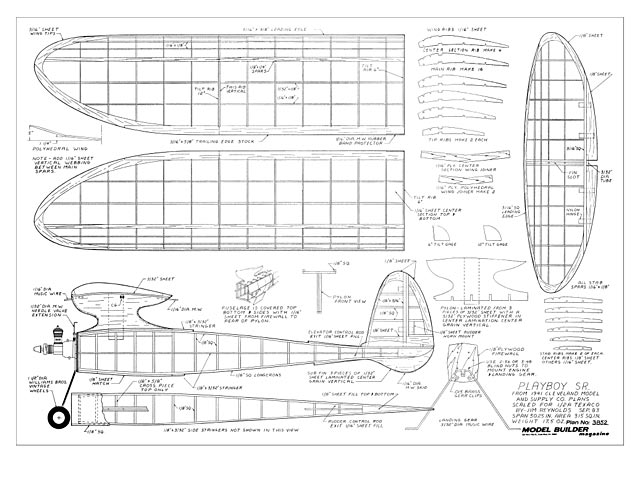 Here is Jim Reynold's re-scale of the Playboy Senior for 1/2 A Texaco competition from Model Builder issue 03-85. The original was FF 80in span, this version is RC 51in span. Uses a modern wing structure design with top and bottom spars and webbing between.

Quote: "If you want to compete in the Old Timer Half-A Texaco R/C event and have a chance of winning, this is your model to build!

Why build a Playboy, you ask? Because it can WIN! The 1983 SAM Champs radio assist results list seven events, first through fifth place, that a Playboy could enter. Fourteen out of the 35 places listed went to Playboys. That is forty percent. There were no 1/2A Texaco Playboy winners, but there should have been. This 1/2A version of the Playboy Sr is aimed at solving that problem.

The full size Playboy Sr has a wing span of 80 inches and a wing area of 800 square inches. For no scientific reason a wing area of 315 square inches was selected for the 1/2A Texaco version. The wing span came out to 50.25 inches. According to SAM rules (eight ounces of weight per square foot of wing area) the model has to weigh 17.5 ounces.

I have a love-hate relationship with wings. I hate cutting out wing ribs, notching trailing edges, sanding, covering and putting on identification numbers. I love it when the job is done.

Unfortunately, I had to build the Playboy wing twice! The first wing was built using the same type structure as shown on the 1941 Cleveland Model and Supply Co Playboy Sr plans. It did not last long. After two uneventful test hops, test flight number three was a disaster. The little bird caught a boomer, the engine seemed to run forever, and then floop - it disappeared into the clouds. A little rudder, no airplane; much more rudder, and finally it popped out of the clouds in about a 60 degree dive. The left wing had folded. After a long uncontrollable dive, the Playboy impacted in the middle of a paved runway. Miraculously, damage to the fuselage was minimal, but the wing was a basket case.

The second wing, the one shown on the plans, was built with upper and lower wing spars and has 1/16 inch vertical webbing in between. It is strong.

Most Playboys, big or small, come out tail heavy. This one is no exception. Fortunately, this one also came out underweight. A one ounce Prather nose weight put the CG at the required 50 percent point and helped meet the minimum weight requirement. The weight looks like a small flywheel and was added behind the prop. The hole in the weight had to be bushed to fit the smaller Black Widow prop shaft.

The radio equipment used was a Royal Vanguard receiver, a Futaba 250MAH battery pack and two World Engines 5-22 servos. The switch, battery, and receiver all go behind the firewall. The servos are just behind the CG. Access to the radio equipment is through a 1/8-inch sheet hatch on the bottom of the fuselage.

The servo rails were made from 3/32-inch plywood and were fitted between the side stringers. After the crash, I added some 1/8-inch sheet to the 1/16-inch sheet fuselage sides where the servo rails join to help spread out the load. Just some insurance in case I had to make another 'testt crash. One-eighth inch square hard balsa push rods were used to connect up the controls. Plastic rods could be used, but be prepared for some unwanted trim changes as the temperature varies.

The control surfaces were hinged with Rocket City nylon strip hinge material. This hinge will Hot Stuff in place. The controls were set up so that rudder throw was 3/4 of an inch each side of center. The elevator travel was plus or minus 1/4 inch. The elevator is more of a trim tab than an elevator, but it works. GM weight Silkspan was used to cover the model; however, plastic covering will work just as well.

If you elect to cover with paper and dope, add a plasticizer to your dope mixture. It helps prevent banana shaped stabilizers and other weird unwanted geometric shapes. A mixture of 1/4 ounce Tri Cresyl Phosphate (TCP) with eight ounces of dope works well for me. Use regular Butyrate until the covering reaches the desired taughtness, then use plasticized dope for the remaining coats.

The engine used in the 1/2A Texaco Playboy was a Cox 049 Black Widow. The engine has four additional head shims (glow head gaskets) for a total of five. This engine turns a cleaned up 8x4 Top Flite Super-M prop at about 7000 RPM. It runs well on fuel containing five percent nitro. This engine, prop, and fuel combination will run about five minutes. The altitude gained with a Playboy will test your eyesight.

If you want a longer engine run, which will result in a slower climb, exchange the Black Widow tank and backplate assembly for one from a Golden Bee. This combination will slow the engine to 6000 RPM and increase the running time to almost seven minutes. Whatever you do, stay out of the clouds!

Come on and join the 1/2A Texaco mania. Build a 1/2A Texaco Playboy Sr and try for the winner's circle." 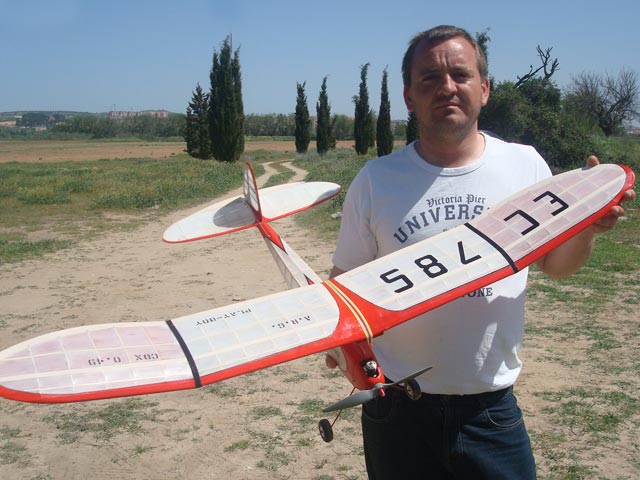 This is the best goddam plan and plane I have ever built! (This plus the Anderson Pylon). All thanks and credit to you and your fellow workers, Steve, for carrying out this mammoth and selfless work. May you and all your fellow modellers find yourselves at the place marked 'AEROMODELLERS HEAVEN', when the old man with the scythe inevitably comes calling. You have got the greatest reward, you have made an old codger very, very happy and have earned his eternal gratitude! Best regards,
MartinHartmann - 11/03/2014
I always wanted to send you photos of this beautiful machine [main pic, 003-008] that gave both my son and me, hours and more hours of very pleasant flights, at the time we could not publish the map, but I have already seen that you have done it, so it is the moment to send you the photos of ours. (Oz 3075) We used the same plane by adding the engine fairing and slightly changing the distribution of the side members.
A big hug,
AntonioRG - 02/12/2020
Add a comment