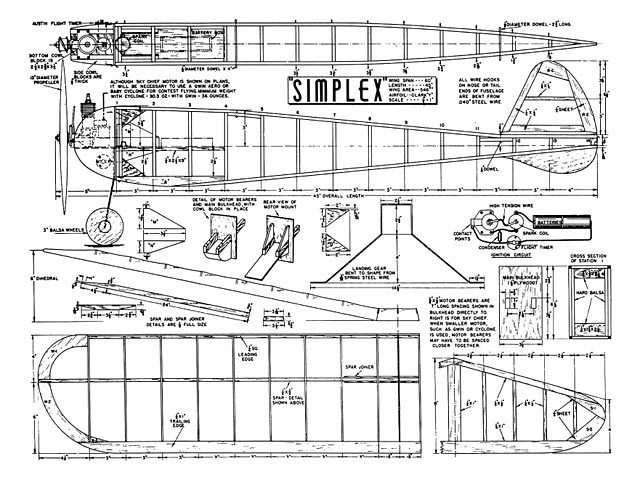 Simplex. Free flight gas model. This is the original drawing (and article pages) of the Simplex design from Air Trails, 1941.

Quote: "What! Never built a gas model? Then here's your chance to get started for less than eleven dollars, with engine and wheels. The Simplex, by Paul Plecan.

HERE is a gas model that is easy to build, easy to transport, and easy to fly. It is also very easy on the finances. It can be seen that the model is simple to construct as soon as one sees how many straight lines the model has, especially when viewed from the side. The wing and tail both are readily removable for transportation, and the motor unit slips out for repairs or battery changing, The original model was lost on the day it was test-hopped. On its eleventh flight it flew out of sight in 33 minutes on a 15-second motor run.

The author built the original Simplex at a cost of $2.48, which includes everything except the timer and engine. A good timer may be had for $1.25 or less, and there are a variety of motors on the market suitable for this model, some as low as $6.95 complete with coil and condenser. Adding up the above figures, we get a sum of around $11 for a complete gas job, ready to fly. Does it sound interesting? But before going any further, let it be stated that this model, even as simple as it is, should not be attempted by anyone who has not had success with rubber models.

First of all, a flat workboard or bench is required. A white pine board about one foot wide and four feet long is excellent for a workboard, as pins can be stuck into pine without the use of a hammer. The next thing to do is to get a sharp pencil, a ruler, and a large sheet of paper on which to draw the plans. The plans presented with this article are one quarter full size, so any parts thas.you may wish to have the size of may be measured directly on the plan, multiplying the figure obtained by four to get the actual size. You can leave the curved tips off the wing plan, as full-size wing tips are given, so it is a waste of time drawing in unnecessary curves. Since the fuselage must be made before other parts can be fitted to it, we will tackle it first.

The fuselage is made completely of 1/4 in squares throughoUt, except for the 1/4 in sheet gussets L and O in the nose. The actual assembly is illustrated clearly in the plans, so it will not be explained at length here. Just try to keep the alignment near-perfect and be sure to use plenty of cement on the joints. The nose of the fuselage should be filled in as shown on the plans. Quarter-inch squares are cemented on each side, and 1/4 in sheet cut to the sizes shown is cemented to the top and bottom, just inside of the front cross braces. Do not forget to cement the dowels in place near the wing-mount portion and the tail-mount portion. These dow-els should be cemented in place with several heavy coats of cement. The fuselage may now be covered and sprayed with water, so that the covering shrinks taut whien the water has evaporated. Three coats of clear dope should be applied to the fuselage, and one on the inside of the nose portion to protect it from oil.

The under portion of the rudder comes next. This is cut from 1/4 in sheet and sanded to a streamlined cross section. Although not shownon the plans, a long tail skid will keep the under rudder from being sheared off in a landing when the model swings around due to one wheel hinting an obstruction..."

Thanks to BillW for updates with this one.

Planfile includes article.
Redrawn version of the plan from MB, Feb 1985, posted by Warren B and courtesy of Planeman. 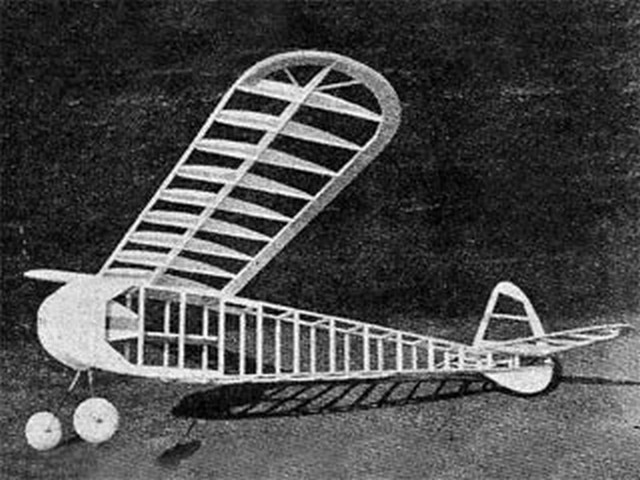