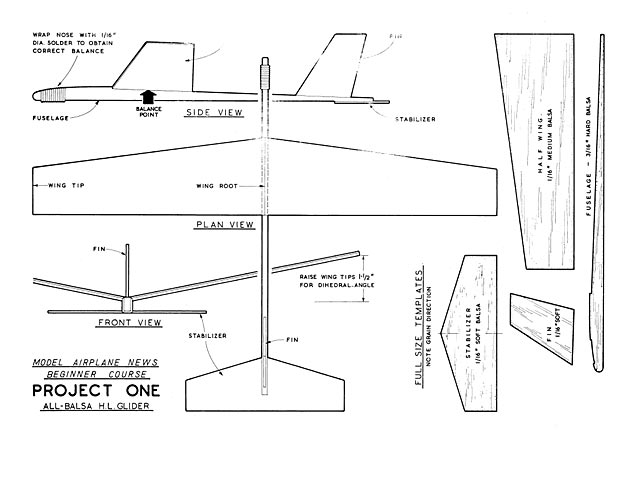 Quote: "NOTE The following instructions are progressive in the same way that the model designs are progressive. The most elementary instructions are given in the case of Project One since this model is intended for the young beginner who has never previously built a model or handled balsawood and cement. With each succeeding model, however, more and more of the elementary details are omitted in favor of more complete information on the constructional details of that particular model.

Read through instructions for each model before attempting construction. General notes, plus photographic sequences illustrating construction can be found in Model Airplane News for March 1961.

1. Cut out all balsa parts using modeling knife or razor blade taking care to hold the knife upright so that edges do not slope. Cut wing in one piece. Take particular care in shaping fuselage stick to pattern, as the slope on the top of the stick forms the correct angle of incidence for the wing. Lightly sandpaper all edges and surfaces, using sandpaper wrapped around a wood block to ensure even sanding. Mark center-line on wing and stabilizer.

2. Score wing along center-line with knife point. Do not cut right through. Now crack the wing along this line so that it assumes a shallow 'V'. This is called the dihedral. To set the dihedral angle permanently, rub cement into crack above and below and lay on building board. Pin down one half of wing and rest the other tip on a block or books so that the tip is raised 3 in. Allow to set for at least 30 minutes.

3. Cement stabilizer to underside of fuselage, making sure that it is exactly positioned by pinning down both stabi-lizer and fuselage over plan. Position a scrap of 1/16 in. balsa under forward end of fuselage to ensure even contact with stabilizer at rear.

4. Cement fin to fuselage, making sure that it is upright and at 90° to the stabilizer. Leave complete fuselage and tail unit to set on building board.

5. When wing dihedral is set quite hard, carefully sand the underside at the center to form a slight 'flat' so that it will rest neatly on top of the fuselage. Now cement the wing on the fuselage, supporting it with blocks or books so that each tip is raised the same amount and it is thereby correctly aligned with the tail unit and fuselage. Temporarily pin the wing to the fuselage to ensure even contact while the cement sets.

6. Allow assembly to set for at least 30 minutes, then remove from building board and run a thin line of cement under the wing where it joins the fuselage to strengthen this joint.

7. Starting at the front, now wrap 1/16 in dia solder around the nose. Before cutting off excess solder, check balance by placing finger tips under the wing at points shown and cut off solder until correct balance is obtained. Squeeze up solder with a pair of pliers.

8. Carefully sand entire model with very fine sandpaper until a smooth, polished surface is obtained. It is not advisable to paint the model as this will add unnecessary weight, but if desired it can be given one coat of clear dope in order to harden and preserve its finish.

9. Flying. If built accurately, your model should fly correctly without adjustment. Launched from shoulder height at a slightly nose-down angle, it should glide 25 to 30 feet in still air. If the model dives, remove a little of the nose weight. If it stalls, ie rears up, then dives, add more weight. Practice launching until you find correct launching speed. Too vigorous a launch may cause stalling even though balance is correct. Small adjustments to longitudinal trim (as this is called) can also be made by warping the trailing edge of the stabilizer - ie by breathing on the TE and gently bending it up (to correct dives) or down (to correct stalls). Warp TE no more than 1/32 to 1/16 in. If the model banks or turns sharply, check fin alignment, also wing dihedral and alignment. For longer flights, launch from higher alti-tude (hillside etc.) or practice a more vigorous launch with model slightly banked, pointed upward and slightly off-wind so that it will pull out of its climb without a stall.

Project One is a simple but strong model, able to take plenty of punishment. Experiment freely with it and it will teach you quite a lot about the basic principles of model trimming and flying and thereby prepare you for the powered models to follow."

Quote: "This is an aeromodelling course. It includes five models from the simplest glider to an engine powered free flight model. It was designed by the late Peter Chinn for 'Model Airplane News' and published in 1961. The models are beautifully conceived and they all fly extremely well. The engine powered free flight model is really nice and out of the rut of the common sports FF model. It can be enlarged for radio control operation. This plan has been solicited in the past and it seems to me it was quite difficult to find. Enjoy and greetings from Colombia!"

Update 04/01/2016: Added a supplemental parts sheet thanks to DavidWhiteley. 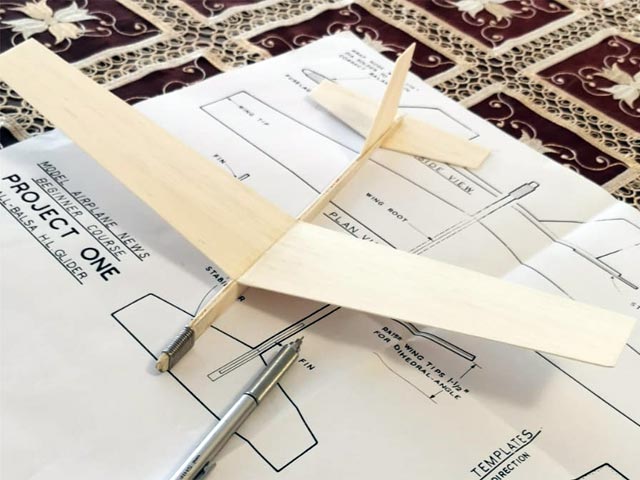