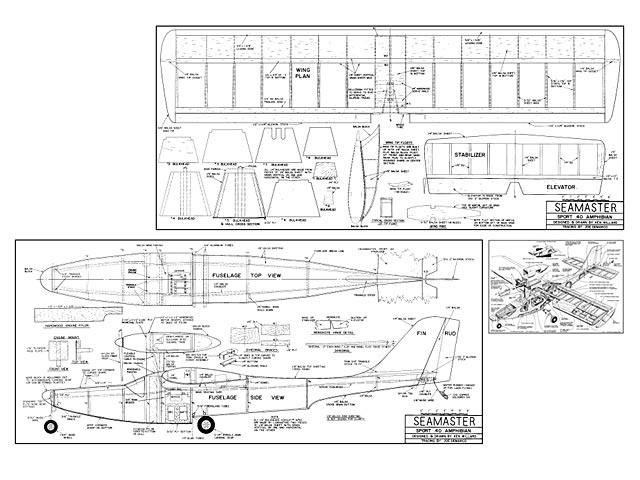 Quote: "Everybody loves Ken Willard's wet and wonderful RC seaplane designs. Here's his latest, a sporty, good-sized ship capable of Pattern maneuvers -and it even has a strap-on landing gear for days when there's no water around! Seamaster Sport 40, by Ken Willard.

HEY, WHY DON'T YOU take a break from designing all those pipsqueak 1/2A seaplanes like the Poolboy (oz1586), the Duckling (oz3631), the Simple Sunday Seaplane (oz6243), and all those little jobs, and come up with a design for us guys who like .40 and .60 size models? The modeler, a friend of mine, sounded dead serious.

I bristled a bit. Look, there's nothing wrong with little airplanes; I happen to like them. Besides, it wasn't too long ago that Model Aviation published the Drake II (oz65), which had a .15 in it. Another thing, ol' buddy, the little ones are a lot harder to fly than the big ones, and more challenging. That's just it, he retorted, ee don't want something more challenging. We want something we can fly off water that is easy to fly - could even be used as an intermediate type trainer, yet will do aerobatics when we want to. You know what I mean, sort of a sport model and trainer for water flying, like your Headmaster Sport Forty is for landplanes.

OK, I'll think about it. And I did. When the late Sid Axelrod asked me to come up with an enlarged version of the Headmaster for .40 and .60 engines, we had long discussions about it. I was a bit hesitant, feeling that the market for that size sport trainer was pretty well covered. But Sid convinced me, bless his great soul, and he was right The Headmaster Sport 40 (oz5877) had turned out to be a very popular design.

The more I thought about it, the more enthusiastic I became about designing a flying boat for engines in the .40 to .60 displacement range. I dawdled with some sketches, and suddenly it hit me. Hey, the Head-master Sport 40 wing, stab, and vertical fin have turned out to be just the right size for .40s and .60s. Why not adapt them to a flying boat hull design? My philosophy on design has always been, When you've got something that works, don't try to fix it!

How about going one step further? Let's design the hull so that you can take your wing off your Headmaster Sport Forty and put it on the flying boat hull, without changing the wing in any way. Then, using the planform for the stab, elevators, fin and rudder from the Headmaster, make the tail feathers for the flying boat.

Wait a minute! The increased side area of a flying boat hull forward of the center of balance will require a larger vertical tail area. Simple solution: use the fin as is, and increase the rudder area. Let's do it.

To use the wing of the Headmaster without modifying it meant that the engine pylon of the flying boat had to be integral with the hull, and not mounted on the wing. That's the way the pylon is mounted. Works great.

The name was a natural result of all this doodling. Since the design is basically sort of a Headmaster Sport Forty that 'went to sea' as it were, what else?

One more thing. Some modelers have access to lakes and ponds, but others don't. Why not try to make the design amphibious - a model that can be operated either off water or a runway, depending on what is available? So, a quickly removable tricycle landing gear is incorporated, to cover all bases."

The Seamaster Sport 40 is designed for all you enthusiasts with .40 to .60 engines who want a model that can be flown off water or land, is easy to build, and easy to fly. Incidentally, during the test program, the model was also flown with a G-Mark twin .30. Admittedly, it had 'scale performance' and had to be flown on the wing, not on brute power, but it did very well.

Wing: If you happen to have a Headmaster Sport Forty, your wing is already built. Use it. If you have to build from scratch, the plans show a very conventional structure - somewhat different from the kit wing, since the preshaped leading edge and trailing edge may not be available to you. Also, if you've built any of the sport trainers, like the Goldberg Falcon, the Sig Kommander, or the RCM .60, the Seamaster wing will present you with no problems.

If you do decide to use a .60 engine and are worried about the strength of the center section (it's never been a problem to me), then you can cover it with 3/4-oz glass cloth before MonoKoting or painting. The weight addition will be minor. It's your choice.

Since the structure is conventional, all that needs to be said here is 'build it to plan.' How-ever, note that the plans show a servo installation that will yield differential aileron travel. I recommend that you use the setup. It is not mandatory. but if you have equal aileron travel, there is the possibility that you will have adverse yaw when applying aileron unless you also feed in a bit of rudder. Again, it's your choice.

Wing tip floats. The wing tip floats are a simple box structure - two sides, a nose block and tail block, and top and bottom sheeting. To attach the floats to the wing, there are three alternatives. One way is to permanently Hot Stuff the floats to the under surface of the wing. Another is to insert 3/16-in dowels into the nose block and tail block, and hold the floats on with rubberbands going over the top of the wing.

The third way - and it works quite well - is to make sure that the upper curve of the float fits flush to the under curve of the wing, then Hot Stuff one side of a Velcro strip to the wing and the other side to the top of the float. Press the float up in place. and it is attached. Then, if you want to fly the Seamaster as the landplane version. and don't want to scrape the tip floats during a rough landing on the runway, you can quickly remove the tip floats for land flying.

Tail surfaces: The stabilizer and the fin are made with 3/4-in balsa. The rudder and elevator can also be made from 1/4-in balsa stock, but to sim-plify the job of tapering them down to a 1/16-in trailing edge, I used Sig's 2-in aileron stock for the elevator. For the rudder, a piece of Sig's 2-in aileron stock butt-joined to a piece of 3/4-in flat balsa cut to the triangular shape shown on the plans works well.

Note the 1/16 plywood doubler at the bottom of the rudder. It serves two purposes. One purpose is to provide a firm base for mounting the control horn. The other is to do likewise for the swing axis of the water rudder, which can be retracted when flying the Seamaster Sport Forty as a landplane. The rudder hinges are a matter of choice. I used MonoKote hinges. If you prefer nylon hinges, the trailing edge of the stab and the leading edge of the rudder will have to be V-cut or rounded to permit rudder movement.

Hull: Up to this point the construction has been easy. That is not to say that the hull is hard to make, but you will have to be careful when assembling the various parts to be sure that the alignment is true.

As you can see from the plans, the hull sides are big. If you want to cut them out of one piece, you'll need a couple of Sig's 1/8 x 48 x 6 balsa sheets. True, they cost more than two 3-in wide pieces butt-joined at one edge, but if you can get two pieces of the 6-in sheets that are of the same density and equal weight, it will make the job of aligning the hull shape longitudinally a lot easier.

Note that the plans show the bulkheads made from two pieces of 1/8-in balsa sheet, with one having the grain run vertical and the other with the grain horizontal. This makes for a very strong structure. However, if you want to use 3/4-in balsa stock, run the single grain crosswise: it gives better compression strength when you pull the forward and aft ends of the hull inwards to achieve the desired planform. Here is the sequence I used in assembling the hull..." 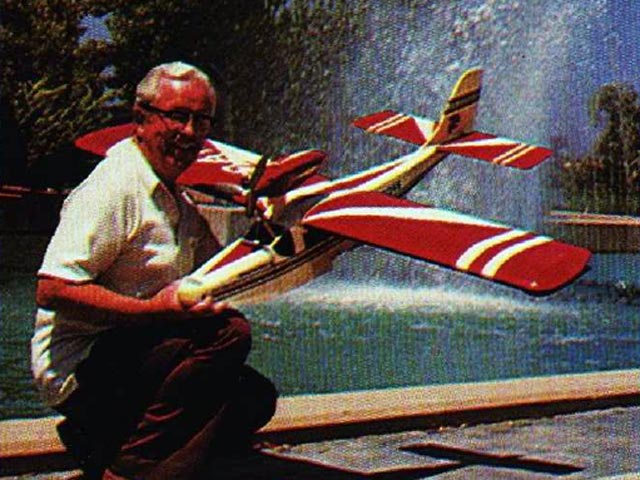