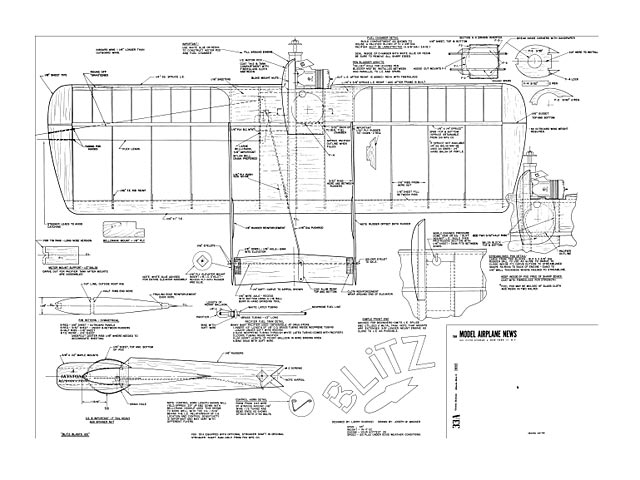 Quote: "Faster than fast combat - prime object for our super-speed ribbon chopper! Bonus with this one as full details for blitzing with Blast fuel. Blitz, by Larry Scarinzi.

We have now entered the era of 120 mph combat models, high nitro fuels and rpms out of this world. High speed and tight turning capability are certainly a measure of performance in a combat model.

It was the ride home from the Chicago Nats with 'Boltin' Bill Ledden that sparked The series of Blitz test models. Discussion centered around a light streamlined craft that could utilize the higher rpm's available in present day nitro burners. It was agreed that the most successful combatter would be a marriage of a lightweight, well-designed model, properly tuned engine and fuel system that would act as one unit.

Several test vehicles were built to evaluate long and short moments, rud-der area distribution, fuel systems and airfoil thickness. Early in 1963 the single needle bearing Fox .35X out-shone the preceding combat special in some areas. Blast fuel was introduced and showed its effectiveness quite early. Between engine tuning and higher nitro fuels, we were now well into the era of development where we could literally 'Blast' engines apart just about at will, and this was not confined to the jewels of any one manufacturer. The Blitz was now doing 115 mph whenever we were willing to risk higher nitro fuels. Structural limitations in the .35X shaft were now evident and proved to be our next barrier. A plea went out to Duke Fox to supply a new shaft filleted as to eliminate a stress concentration in the crank-pin area. Along with this as a softening up factor went a claim that such a shaft would surely allow us to Blast over 120 mph!

After careful study the final Blitz was planned. Still contending with the crank-shaft barrier, this model consistently flew over 114 mph with low nitro fuels. Finally Duke came through with what is now well known as the stroaker shaft.

The first Blitz with a .36X engine was assembled and ready for test. Would it do the predicted 120 mph? Was Duke's new shaft really Blast-proof? Flying began with straight Missile Mist fuel and a speed of 112 mph..." 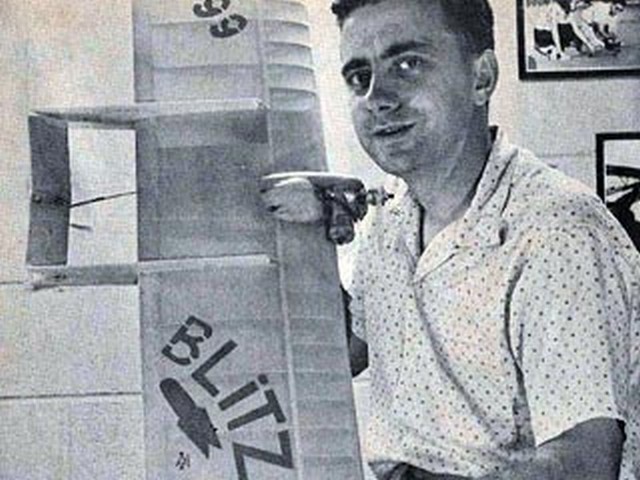