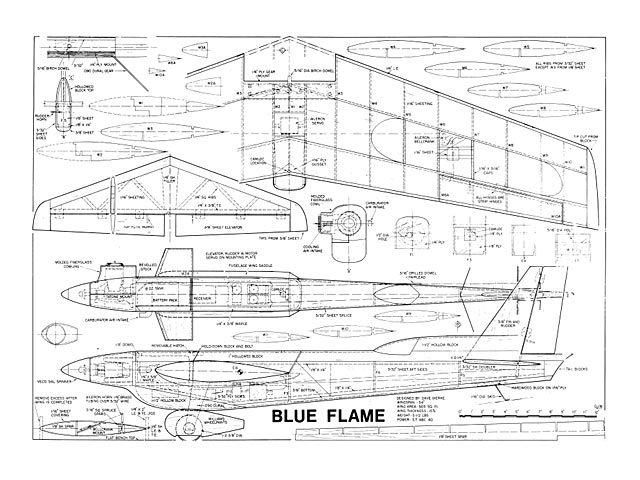 The 'Blue Flame' was ugly! In fact, it was so ugly, it just had to fly, if for no other reason than mere contempt for its designer. Several individuals commented that it should have been named 'Blue Toad' in-stead of Blue Flame. Admittedly, it did look a bit out of place, sitting on the ready tine, patiently awaiting its turn to fly in the Open Pylon event.

Over the years, I have been concerned with not only the flying characteristics of my designs, but their overall appearance as well. I couldn't tolerate a model that had a poorly shaped fin or wing tip. These were primarily the days of Controline Stunt, where the impression of the judges was most important. In fact, we often discussed the obvious advantage a combination Psychologist Sociologist would have in the stunt event. He could analyze the people for whom he planned to perform (ie the Nationals utilized Navy judges until 1972) and build an airplane specifically for impression purposes. In our amateurish way, many of us attempted just that by con-structing big, white military jet models with such subtle slogans as "FLY NAVY" in six-inch letters on both sides of the wing, with smaller symbolic statements on the fuselage. Of course, it was imperative that the trim of this model be red and blue with numerous stars and bars in evidence. Some enterprising contestants even elected to wear military flight suits for an official flight! Of course, the ideal ensemble was a flight suit which matched your impres-sionable, gleaming white machine.

If you have any doubt about the validity of my comments on this subject, please don't miss the Open Stunt event at the Nationals next year (if there are any more of them) and be sure to take your camera.

When the time arrived to design models for Radio-Control racing, it suddenly seemed as though someone had removed a great burden from my head. No one really cares how the plane looks! This was the case with the Blue Flame. It was with great enthusiasm that I began figuring and drawing this model. I had no problem locating the best visual location for a cockpit. In fact, I decided not to have a cockpit at all! Several years ago at a full-scale Hydro-plane (boat) race, someone said: They don't give any prizes to the prettiest rig. I often thought they should have, because ours (Dad's and mine) generally did look the sharpest, but that's another story.

As a provisional event listed in the AMA rules, there were several design parameters which had to be followed. First, however, I should say that we had decided to use a racing .40 engine for the 'Flame.' This .40 was of the same variety used in our Formula I and II racers. The dual purpose of the Blu Flame was to race the Open event and to have a test bed for engine design changes which if panned out could be used in the formula ships..." 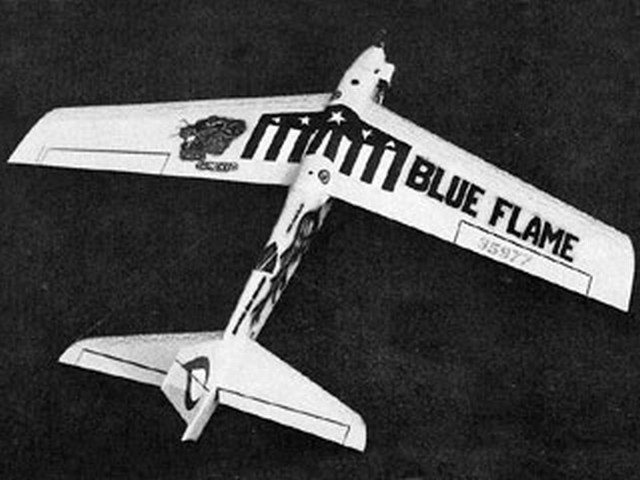