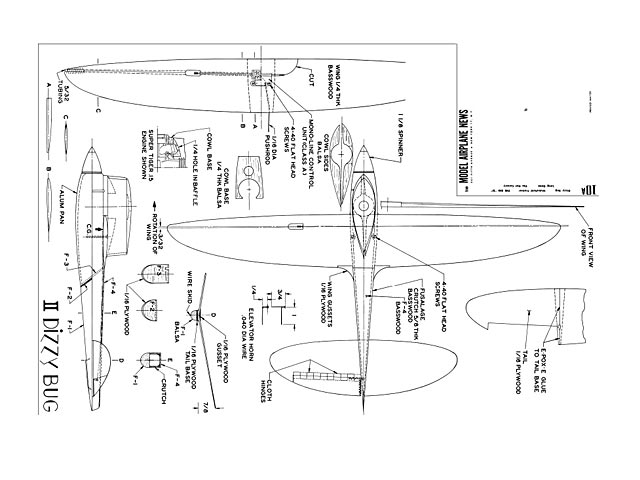 The Number two Dizzy Bug was designed and built for international speed events. It can also be flown in regular AMA contest by using the proper line size and length. The wing and tail areas are the minimum areas for FAI rules and care should be taken not to go under the areas shown. Construction is similar as for most speed models, although no effort is made to build a light model since the wing loading will vary little even with a difference of two or three ounces. This small difference in wing loading will have little or no effect on the final speed.

Disregarding the weight of the model, an effort should be made to build it strong and to reduce the frontal area as much as possible. As in any. other .speed model, the three main areas to concentrate on are the wing, engine cowling, and the fuselage.

The wing of an elliptical planform can be tapered from the root section to a feather edge at the tips. The pan is filed down on the outside as much as possible at the engine location, leav-ing only enough for proper engine mounting. A very narrow cowling, along with the reduced fuselage area and thin wing, are the most important features of the #2 Dizzy Bug.

Using the CG location as shown on the drawings, this model will fly in a groove of about 10 to 12 ft above the ground and very little control is needed to fly the model.

This is a desired feature of any speed model but especially an FAI speed model since it has to be flown from behind the pylon.

Of course, if the model is flown in regular AMA contests, the regular Stanzel monoline handle can be used.

Those of you who would like to try for the 1964 speed team to Budapest would do well to build a couple of these models and have them test flown and ready for the qualification trials in early 1964 or whenever the AMA decides to have them.

As for modifications to the model shown, it is suggested that the builder move the tail back 1/2 in to increase the tail moment, and move the wing 1/8 in back leaving the CG where it is shown on this model. The Torp .15 would be most desirable with these modifications.

Start construction by cutting a Grogan 'A' pan to the length shown and remove enough metal on the inside to mount the engine. Then file the outside of pan and engine mounts. Sand the an and polish the outside as de-sired. The fuselage crutch is made from basswood. The outline should be pen-ciled on the wood and the cut-out with a band saw although with a little more effort and time, it can be done. with a coping saw.

The wing is made from 1/4 in basswood. Start first by using a full size wing pattern and cutting out the planform, cut off the front portion and spot glue back into position. When the glue has completely dried, taper the wing on the bttom from the root to the tip. A small shaving plane and a large sanding block seem to be the best tools for this job..." 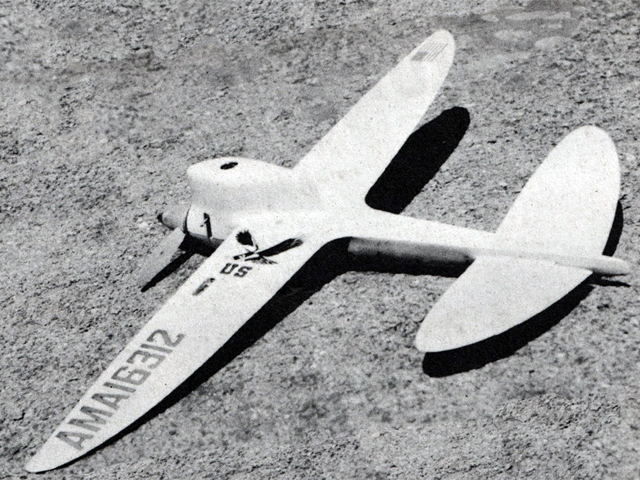