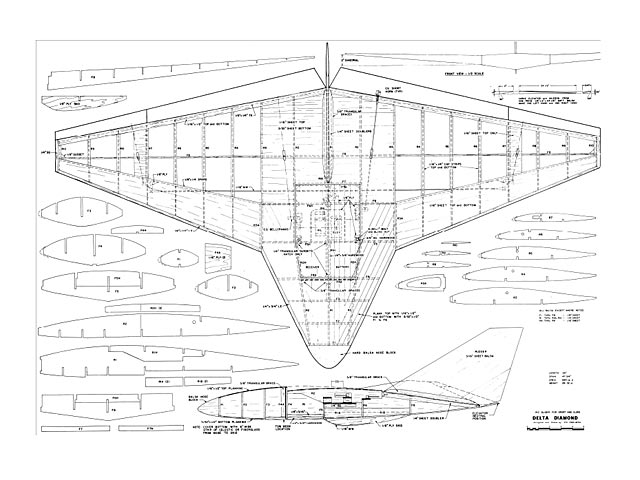 Quote: "The Delta Diamond was started in November 1970 as a towline glider - Delta No.1, of the Dyke Delta JD-2, in platform only. It is a very stable glider, even when carrying extra weights. Delta No.1 was flown many months to find the balance point, in calm and in winds up to about 10 mph. Every time the model came off the 50-ft towline it would turn and fly with the wind for a short distance then turn back into the wind. On a calm day It would fly in a circle about 150 feet. As this model isn't an A1 or A2 glider, the flights lasted no longer than 15 sec at the most. I still fly Delta No.1 but without the extra weights.

Delta No.2 was an enlarged Delta No.1 with a 36-in span. It started out as a towline glider but with additional construction needed for the future installation of the radio gear and controls. It was first ftovvn as a towline glider to recheck the balance point and to see if we could tow it up. It went up at about a 60-degree angle for 15 feet before nosing over into a dive. The tow hook was moved forward one inch and this time it went straight up on a perfect tow. The glide was fast, but not short as with most flying wings.

We towed the Delta up on a 150-ft line. If the wind was up, the Delta would release with a slight pop-up. As the weight was increased, we had to run faster or wait for the wind to blow. We never did get to the total weight of the RC. Flights were mostly like the flights of the Delta No.1. The radio was installed after about ten flights. The control setup was coupled aileron and elevator only. Total flying weight came to 28-1/2 oz which was greater than anticipated.

We tried to hand-tow the Delta up but could not run fast enough, even with the wind helping. I built a powered winch to see if this would help. On the first flight all the winch did was keep the Delta airborne. It seemed as if there wasn't enough power or speed on the winch. We changed the pulleys around and increased the speed of the take-up reel. This time it took off, climbed about 20 ft and rolled over, doing a spin before releasing. The only damage was a broken rudder. The rudder was glued back on and the tow hook was moved forward another inch. I got in one more flight, only this time the Delta didn't gain any altitude - on release it turned into the ground. Off came the rudder again.

With the rudder reinforced and the tow hook moved back half a inch, we tried it again. Tow off by the power winch this time was good, and the Delta got about 150 ft up before release. Now I found out I had too much con-trol area in the elevons and landed on the nose this time, without damage. I reduced the elevons to a 3/4-in. wide strip, with a total movement of half an inch..."

Article pages, text and pics, thanks to Doug. 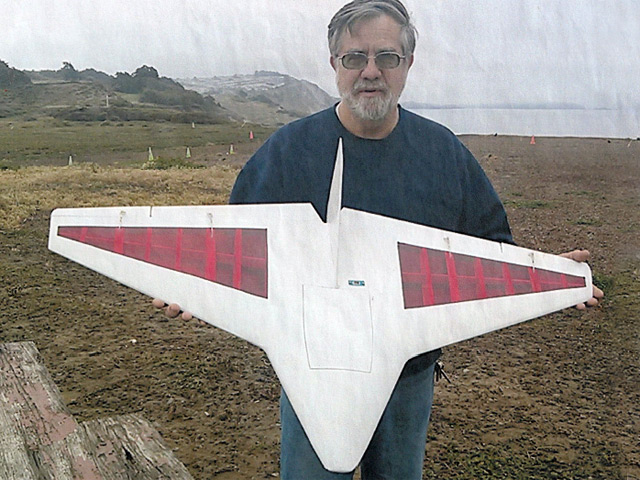