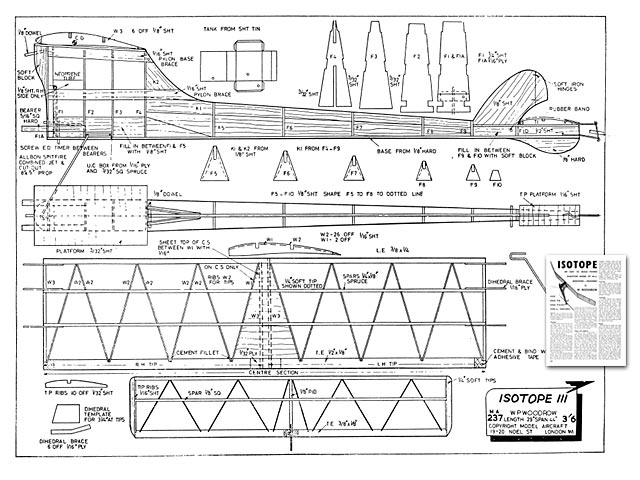 Quote: "For one to one point fine engines. An easy to build power duration model of 44 in wingspan. Isotope, by W Woodrow.

THIS easy to build power duration model features anti-warp, geodetic wing and tail structures, plug in undercarriage, and has a good all-weather perlbrmance.

Fuselage. Make the tank from thin sheet tin and brass tube. Now cut out K1 and formers F5 to F9 and cement them into position on K1. Cut out F1 and F1A and cement together. Make the rest of the formers and fin, also the undercarriage box and bind it with sellotape.

Cut out the base, mark the position of the formers, and pin to the plan Now cement the keel and former assembly to the base. Join the FIA assembly to F2 with the engine hearers, at the same time positioning the tank between them. Now add the rest of the formers, fin and sheet tail support, and fill in between F9 and F10 with soft block. The undercarriage box can now be added, also the pylon braces.

Sheet in the sides of the pylon as shown, and cement neoprene tubing to the upper vent of the tank and pass up and over the lower pylon brace and hold in place as shown, making sure that the orifice is facing into the slipstream. Now add K2 and cement the braces to it. Finally cement into place the soft nose block. When the entire fuselage has set, lift from plan, sand the nose block to shape and the tail support to conform with the fuselage outline. Add the wing and tailplane dowels and the platforms of same. Then finally cement into place the underfin.

The undercarriage is quite straight forward and if required is made from 14 SWG piano wire and plugs into the box in the fuselage.

Wings and tailplane. Warren Girder construction is used, for like most modellers, I hate the necessity of pinning wings down when doping, also there is no danger of future warps. The wings are built as follows..." 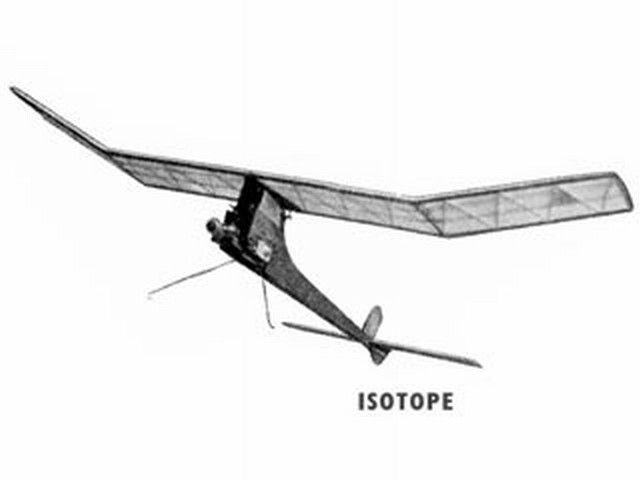