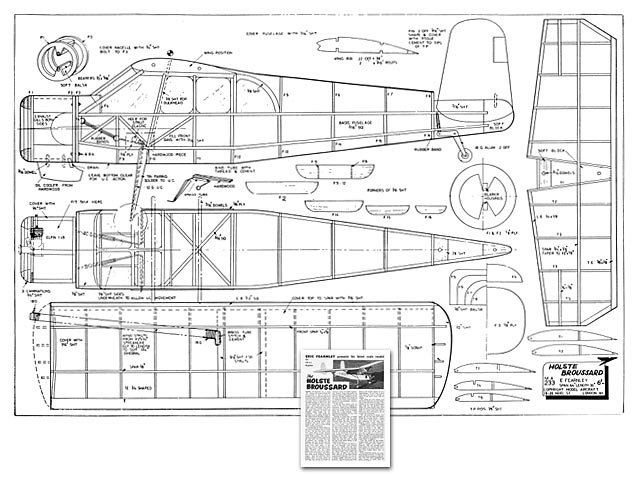 THE development of a good flying scale model follows full size practice in that as much as possible is done on the drawing board to produce the perfect areoplane, but it is only after one or more prototypes are built, tested to destruction, and modified perhaps in fifty ways that the final satisfactory result is produced. Those who study full size design and construction can learn quite a lot from a model, as many of the same problems of stress and strength versus weight are encountered. The scale model has problems such as getting strength in the cabin without blocking windows, etc, with braces, exactly as in full size design. While the odd model may fly off the drawing board, most modellers will agree that a good model is the result of much testing under working conditions.

In presenting the Holste Broussard, the writer is confident that it is built to last. No less than three cowls were fitted before enough strength was found to withstand a head-on crash under power. My new car carries a streak of Britfix dope across the roof where the model flew into it - without any damage to the fuselage, and only one fin torn off; this with an AM25 diesel! Several mods have been made to the structure, and two tails fitted. It has been spun down with full ECC radio installed with the rudder locked over, and lived to fly again. Two pairs of airwheels have been burst with runway landings. Sounds tough! And the price for this? Careful choice of wood, plenty of building time; plenty of cement in the right places, and the will to
attempt a piece of model engineering, without being side-tracked by the latest space travel quickie marvel half way through. Definitely not for the man who builds scale models as a relaxation from 'more serious' aspects of aeromodelling, whatever that may mean.

I will not bore readers with too much of the obvious building instructions. Unless you are sufficiently advanced to read the plans and follow them, the model is not a suitable choice for a first attempt. Less experienced modellers are very well taken care of elsewhere.

Fuselage is a basic box, to which formers are added and the whole effort sheeted up with sixteenth. Plywood forms the front firewall, to which the cowl is bolted with four 6 BA bolts. The reason for this is to allow packing to be added for side or down thrust by loosening the bolts through the front cowl. Note that the undercarriage is bound well to the hardwood cross piece. This member is fitted across the fuselage, and locked in place with sixteenth ply plates either side. Make sure that the tube carrying the legs is free before fitting, or the whole lot will turn.

The motor bearers are fitted to the two three-ply cowl formers. Blocks are added, and the front laminations, also the side sheeting. The size of the bearers will depend on the engine used. The model has flown with an Elfin 1.49, and an Allen Mercury 25, the latter giving a good reserve of power..." 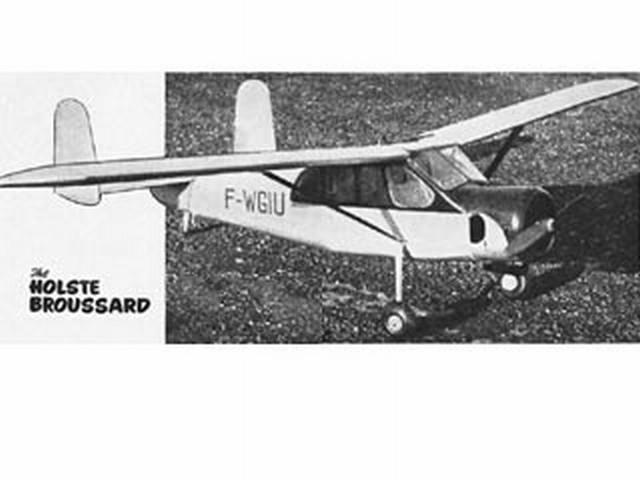