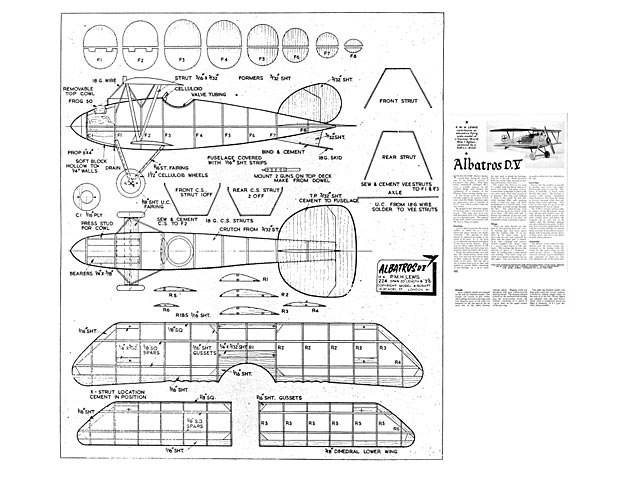 SINGLE-SEATER Albatros fighters earned fame during the 1914-18 war in the hands of several of Germany's best pilots. With their finely streamlined fuselages, DV's were a notable advance in all-wooden design and formed the equipment of a number of the Western Front circuses during 1917.

It lost favour with the leading German staffels in the autumn of that year, when the Fokker Triplane made its appearance, but a number of DV's were still in service when the war ended.

Fuselage: 3/32 in sheet is used for the crutch outline, to which the 1/4 x 3/8 in hardwood motor bearers are firmly cemented. The spacing of these should be adjusted according to the motor to be used. C1 is cut from 1/16 in plywood and pinned and glued to the front of the bearers. Using 3/32 in sheet, make formers F1-F8 and cement them into their respective positions above and below the crutch.

Shape the undercarriage veer and also the centre-section struts from 18-g. wire and sew and cement them to their respective formers as indi-cated on the plan. The tail unit is cut to outline from 3/32 in sheet and sanded to section before cementing to the fuselage. 3/16 x 1/16 in strips are now used to plank the fuselage from F1 to the tail. Work upwards from the crutch edge, meeting at the top and bottom centre lines..." 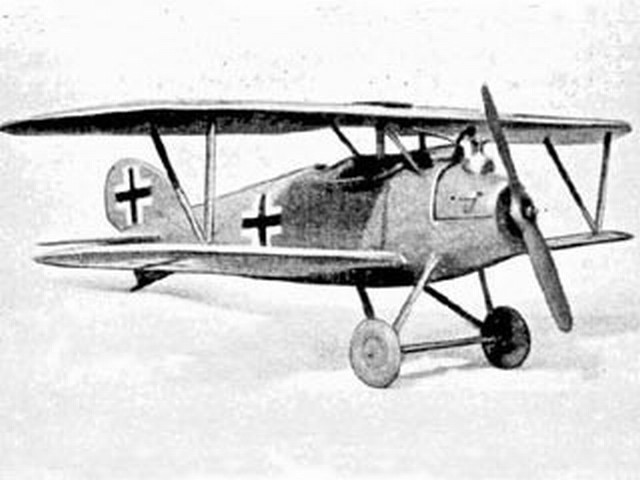