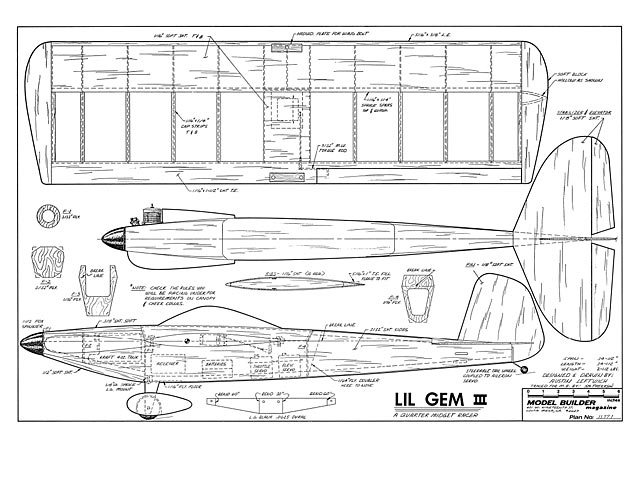 Quote: "Here's a competitive Quarter Midget Pylon racer that can be built from materials available at most hobby shops. No fiberglass, no foam, but a long record of top performance.

As is typical with most competition R/C designs, Lii' Gem Ill is the result of an evolutionary process. This speedy little jewel had its beginning in the late summer of 1970, coincident with my introduction to quarter midget racing and the relocation of my place of residence to Cleveland, Ohio. My move to Ohio put me there a scant 10 days prior to the scheduled First World Quarter Midget Championships sponsored by the MARKS of Mentor, Ohio.

Determined to participate in the up-coming competition, I sought the advice of several local QM flyers regarding a design which could be built and test-flown in the few remaining days prior to the contest. Although none had tried it, several suggested that Sig Manufacturing Company's 'Doubler' sport R/C kit might be an ideal base kit which could be slightly modified to a semi-scale version of any of the constant chord mid-wing Goodyear Racers, such as the Buster, Bonzo or Cassutt.

A quick examination of the kit and a search through my file on racing airplane 3-view drawings soon made it obvious that the ideal full size design after which to pattern the modified kit was Jim Miller's original 'Little Gem', sometimes referred to as Little Gem Mod I. The QM version, known as Lil Gem I, was completed in time to win the 1970 QM Championship with what was then the oustandingly fast time of 2:11:0 for the 2-pylon, 2-mile course then being flown in Ohio. This ship, shown in the group photo, was campaigned heavily through the '71 and '72 contest season, posting an enviable string of wins, including the 2nd MARKS World QM championship in 1971.

As competitive activity and interest in QM increased, and Lil Gem I became more battle weary, it was painfully obvious that if I was to remain competitive (and hopefully in the winner's circle), a new QM would be required for the 1973 season. Much thought was given to switching to a design with more eye appeal, but after due consideration was given to the easy construction, groovy flight characteristics, and contest record of Lil Gem, I decided to stick with the design and simply clean it up.

Lill Gem II came into being as a scratch-built version with exactly the same moment arms, surface areas, spans and outlines as LGI. The major modification included a side-mounted engine with half cheek cowl fairing, a new wing section, smaller wheels and pants, and a shorter landing gear. Unfortunately, at the time LG II was being created, the QM rules had not been solidified, therefore, no attempt was made to produce an airplane with minimum dimensions. Consequently, LG II has excessive wing area, wing thickness, fuselage width and height. In spite of these handicaps, Lir Gem II succeeded in posting eleven consecutive first place wins, culminating in the National Championship at the '73 Quarter Midget Nationals, Rough River, Kentucky.

The formulation in early '73 of a firm set of rules governing QM com-petition, and the acceptance of these rules by our AMA as a provisional event, triggered the need for a Lil Gem built to the minimum dimensional re-quirements but retaining all of the good features of LG I and LG II. Lil Gem III is the end result of this evolutionary process. By reducing the aspect ratio of the wing and slimming the fuselage to minimum legal dimensions, a whopping 4-1/2 square inch reduction in frontal area was achieved.

In its first season of competition, LG III garnered 7 firsts, 2 seconds and 1 third place in 10 competitions. One of the second place wins, and the third place win, were at the Lake Charles Nationals and the Second Annual Quarter Midget Nationals in Kentucky. The fault for not being in the winner's circle at these two important QM competitions lies not with Lir Gem III, but with this tired old man, whose competitive thoroughness and skill seems to decline with each successive meet.

In addition to being extremely simple to build and fly, LG III incorporates two unique features which need explanation. The single aileron arrangement, which was first used by the author on AMA Pylon racers in 1957, is not only simpler to build and rig than 2 ailerons, but it reduces drag by a significant amount. The steerable tail wheel coupled to the aileron servo not only eliminates the weight and expense of the 4th servo, it also permits an aerodynamically cleaner vertical stabilizing surface, since it has no hinge line. When properly adjusted and used, the steerable tail wheel provides all the ground control required for racing takeoffs and landings.

CONSTRUCTION: In order to have a finished weight one to two ounces under the minimum weight of 2-1/2 lb, it is essential that the lightest grade of contest balsa be used throughout. By beginning with an ounce or so of ballast in order to make minimum weight at the beginning of its contest career, you will never have to fly with a weight handicap, since you can reduce ballast as your Lil Gem III picks up weight from field repairs of battle scars.

Wing: Construction of the wing is highly conventional, and can be accomplished either on a flat building board or a wingjig. Although the original does not have it, it is suggested that a balsa false rib be placed at the center front beneath the wing bolt plate. It is also suggested that 1/16 thick webbing be placed between the spars at the center of the wing for additional strength and rigidity. The wing should be completely finished and sanded prior to cutting out the single aileron.

Tail Surfaces: The tail surfaces should be cut from soft 1/8 by 6 sheet balsa. In order to have sharp edges when the airfoil is sanded in, I rout a 1/32 square groove around the entire perimeter of the stab, elevator and fin, then epoxy a 1/32 square bass-wood strip into the grooves. The bass-wood outline makes a perfect guide while sanding and then serves as an anti-knick strip for the thin tail surfaces.

Fuselage: Begin fuselage construction by preparing the four plywood formers. Formers F-3 and F-4 should be scored at the- break line and cracked to form the angle as shown in the plan side-view. The angle should be permanently set by sealing the crack with epoxy. Next, cut out the soft 3/32 sheet sides and laminate the 1/64 plywood doublers, being careful to make the doubled sides mirror images of each other. The balsa sides should then be cut at the 'break line', then over the sharp edge of the workbench the plywood doubler should be cracked in the same fashion as F-3 and F-4. Next, by using the formers to establish the angle needed, set the angle by running a light bead of epoxy down the break line slit. Then join the sides at the rudder post, using enough bevel at the aft end so the finished width is 1/8 inch, to match the fin thickness. Epoxy in the formers in the usual fashion. At this point, the triangular corner stock should be epoxied into place, allowing the corner pieces to extend beyond the edges of the fuse sides. This is necessary, since the corners are not right angles, and enough corner piece over-hang must be allowed so that subsequent sanding with a flat sanding block will provide a complete corner fill when the bottom and top sheets are added. The remainder of the fuselage construction is straightforward and needs no explanation.

Finishing: The fuselage, from the wing trailing edge forward, should be given two coats epoxy or finishing resin inside and out, in order to fuel-proof it. Since it is extremely difficult to keep the total weight down to the minimum using conventional silk and dope techniques, I recommend Super Monokote for finishing the entire model. Nyrods or Golden Rods are recommended for use as push rods for the elevator and steerable tail wheel. The nylon sheath for the tail wheel push rod should be anchored only where it exits at the rear of the fuselage. The unattached front end thus allows enough flexibility to make the connection at the aileron servo when attaching or re-moving the wing.

Flying: The only critical flight adjustment is the center of gravity. If the CG is placed aft of the point shown on the plans, your Lil' Gem III will probably be too sensitive on elevator control and will require frequent elevator corrections on the straight-aways. if the CG is too much forward of the point shown, the No1 pylon turns cannot be made tight enough. Control surface movements should be as follows: elevator +12°, aileron +15°. To compensate for torque on takeoff, the steerable tail wheel should be set for a slight right turn with aileron in neutral.

To those of you who are already addicted to Quarter Midget racing, I suggest that you stick to the designs which you are currently flying, since I'd like not to have to compete with you on a head-to-head basis. To those of you not yet in the expert class, or perhaps just beginning, I believe you will find Lil' Gem III to be the easiest, quickest and surest way to be a winner in QM racing." 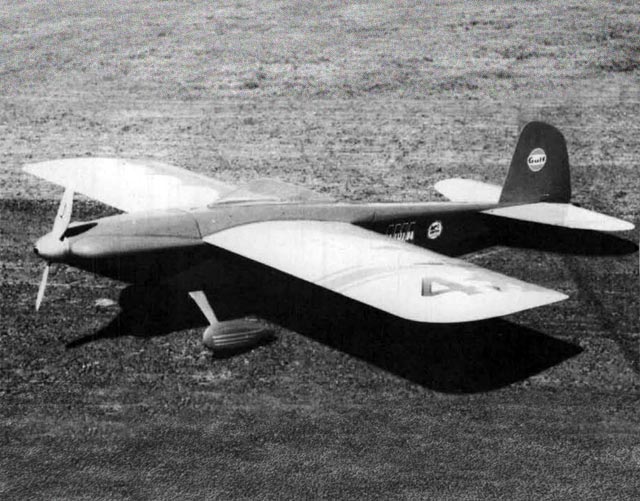