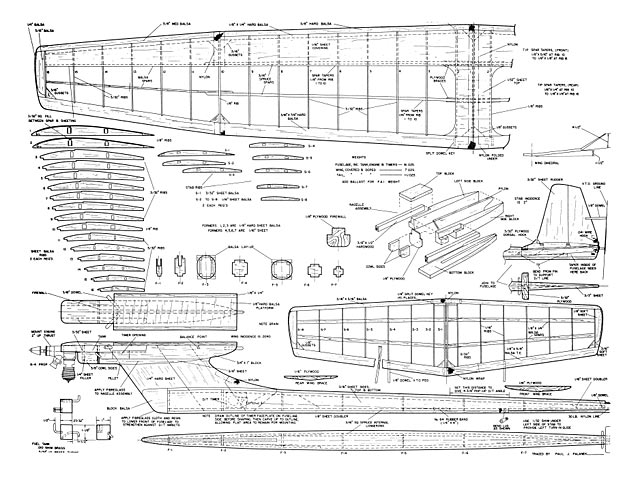 Quote: "The story of FAI Viking is somewhat like looking for the pot of gold at the end of the rainbow - only, this time it was really there.

It's the story of an idea that seemed both right and wrong - right because it could decrease drag during the climb, and wrong because it would definitely go against general free-flight modeling practice. Most modelers have had to use downthrust all through the years in order to kill the looping tendency. Yet what I wanted to use was upthrust - and that should cause uncontrollable looping!

The idea seemed so ridiculous that shortly before this article was written, a world-famous modeler stated positively that our model would loop all over the sky. He said he had been all through the FAI Viking type of layout, and the force arrangement simply could not work. What he didn't know was that we had finally recognized something that has been right under our noses all along. But let's get back to the beginning.

The reason I've always used a small angle of incidence in the wing (as well as small decalage), is that it would allow faster climb through lower drag. It seemed common sense that the propeller and the wing should not be pointing in different directions. However, about seven or eight years ago, I realized that this line of thought led directly to the idea of upthrust.

Briefly, the greatest source of drag in the ordinary model is the wing. When we use downthrust, we are trying to pull the wing through the air at a large positive angle, which means higher drag. To get the least possible drag, the wing must be pulled through the air at a slight negative angle. The reason for this is seen in airfoil performance charts derived from wind tunnel tests. Airfoils, such as are used in free flight, generally show lowest drag at a negative angle-perhaps two to four degrees negative.

This meant that upthrust would have to be used to make the wing negative to the thrustline-exactly opposite to tradition. Since most, practical modelers have often found it beneficial and even necessary to use downthrust simply to control the model, this seemed like an impossible problem. Attempts to solve it on paper were not encouraging, and, with my limited time for model building, a serious effort to find the answer was not practical. However, I did discuss it with modelers at every opportunity.

In the fall of 1961, I met Jess Krieser, and old-time modeler who wanted to get back into free-flight. He built the 1/2A Viking, and in testing, I noticed the angle of climb was shallower than it should be. Also, after the engine cut out, the nose would rise sharply-just as though the engine had been holding it down. Examination showed no down-thrust-but the downthrust effect was there. I suggested upthrust..."

Alternate scan of the same plan, thanks to dfritzke.
Article. 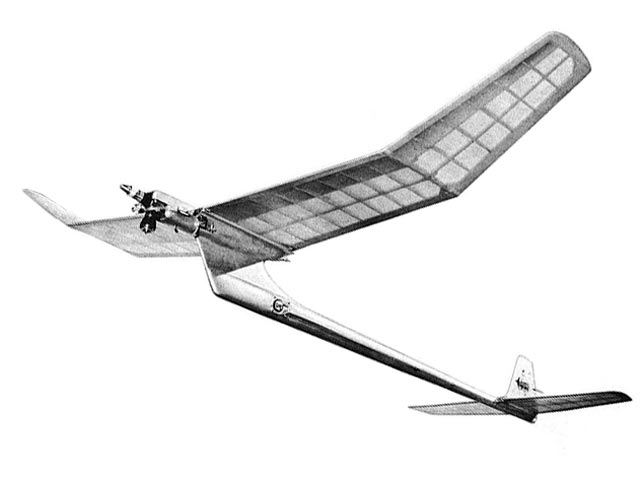 In the past year I have scratch built many models from plans on your website. See Carl Goldberg Viking photos attached [more pics 003, 004].
AndyCoutts - 18/05/2016
The FAI Viking and the Hi-Thrust Viking were two different designs. This plan is the FAI but the article is for the Hi-Thrust. Publication date for this plan is MAN, June 1963. I will send correct article shortly.
anon - 22/11/2017
Thanks, got it. Will split this entry into 2 separate listings, 2 separate plans.
SteveWMD - 22/11/2017
Add a comment