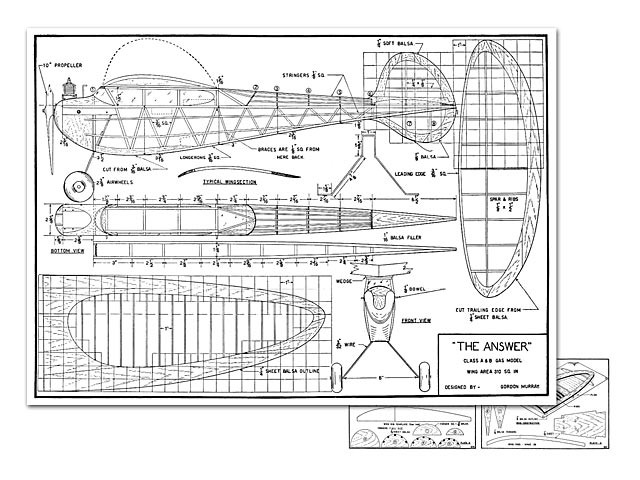 Quote: "Build this dual purpose National record holder - it can be flown in either Class A or B Contests.

Performance? The first day 'The Answer' was flown it gave evidence of superior performance. It was entered in the Metropolitan Model Airplane Council and despite the lack of thermals the little ship turned in an average of 1:50 to take top honours. Under daily flying conditions, with better weather, it has several times done over five minutes. The design of the ship has proven extremely adaptable to various clases. When scaled up 1-1/2 times The Answer proved to be fully as fine a performer as a class C ship, establishing an officially timed average of 8:36 with a Dennymite.

The wing used on the Answer is conceded to be the secret of the entire ship: it combines high lift with a maximum of efficiency. Say what you will, it has been proved to the staisfaction of the most critical builder that this wing really 'has the stuff'. Once you have built one, you too will be intrigued by the possibilities and will probably be trying this type of wing on other models... "

This plan and article also appeared (was reprinted) in the book 'Air Age Gas Models' see RCLibrary pages at http://rclibrary.co.uk/title_details.asp?ID=1040

Update 17/06/2017: I am reshuffling this listing around so the original pages from MAN will be the primary plan, and the redrawn version will be a supplement. 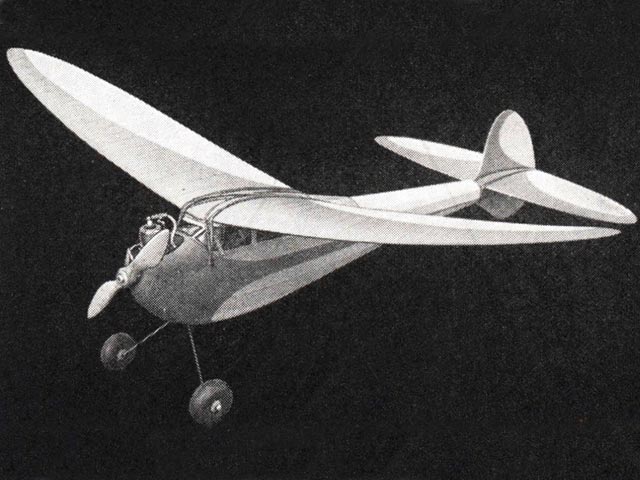 Hi, I built one of these many years ago but from a Cambrian Models kit. I remember opening the box and not finding any wing ribs ! The wing is in fact built from an outline plate which is then soaked and bent over formers to get the correct shape and the gaps across the frame filled in with very thin ribs cut using a template. Mine was powered by a PAW 1cc diesel and flew very well. Eventually it was retired as oil stopped play. I still have that RITZ wing stored in my loft as it is a work of art. I now use electric power for most of the models I build . This plane would still be flying If modern brushless motors and lipo batteries had been available back in 96. I will try to find the photos of my Answer and sent them on. I did find some video which I posted on youtube at https://www.youtube.com/watch?v=vnVR-H4N7bc Just found the pics [see more pics 003, 004].
Pete - 21/04/2014
I've been flying the Cambrian Answer for several years. A little brushless motor and a 2S 1300 lipo are all it needs for long, leisurely flights. Mine's covered in tissue over mylar. One of my favourites!
Tim Hooper - 14/11/2020
Is the wing covered top & bottom?
John Pennells - 24/05/2021
Yes, the prototype wing was covered on the bottom. The designer, Gordon Murray, explained in the article how to do so with light bamboo paper and dope.
Bill Hibbets - 24/05/2021
Add a comment