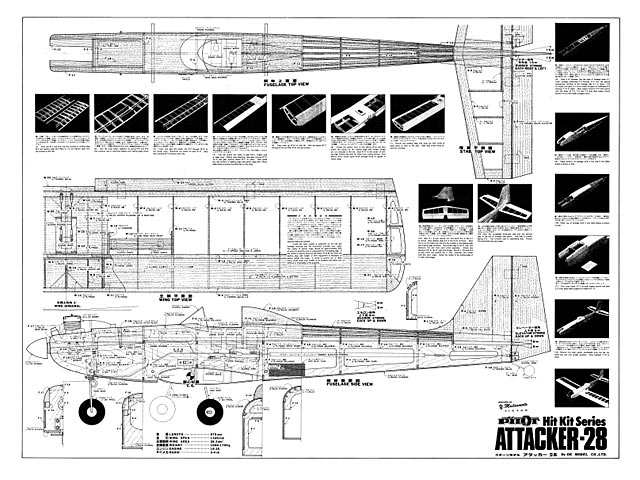 I WAS immediately impressed with the Pilot Attacker 28, first with the sleek, racy lines shown on the box, and then by the contents (described in the June What's New column) It certainly interested me as an old builder, lots and lots of wood, no plastic or foam. When I first saw the plan I wondered what I had let myself in for, but a few seconds study showed all to be clear and simple, but being written in both Japanese and English it looks really fierce. The only guide on where or how to start for those undecided about these things are the 14 steps and pictures shown on the plan. I would hesitate to call them building instructions, but they are a guide so I followed them to see if they worked.

First task was to check all the little bits in the plastic bags and number them according to the plan. Then look at the sheeting, you can soon see where it should go, and like everything else in this kit it has all been carefully thought out and will have its proper place.

Before you put glue or knife to wood there is one important point to bear in mind - if it does not fit exactly you have got it wrong (wth one exception that I'll come to later).

It's just like a jigsaw: The steps on the plan start with the wing, so knife in hand I picked up the die-cut balsa and ply. I need not have bothered with the knife, the numbered (in English and Japanese) ribs, dihedral braces, etc. rust fell out. A marvellous start. I have spent hours cutting out so called die-cut parts for other models, this was magic.

I like to try a dry run and was pleased to find that all parts fitted perfectly, and with notched and shaped leading and trailing edges it was simplicity itself. It is about now that you choose the undercarriage form i.e., tricycle or tail dragger, as the position of the main landing wheel support blocks depends on it.

Now comes the one error. The tip braces are numbered incorrectly, but they do fit perfectly in the right place, so shuffle them about and you'll soon find out where they go. (On my kit the trailing edge pair ended up as W18 top and W20 bottom and leading edge 17 top and 19 bottom.)

Whilst the plan says attach ailerons, it shouldn't be permanently at this stage, hinge them when all is covered. A tip from the wise here. It fits together so well that one tends to forget little bits. It was only after I had taken pictures of the bare airframe and started to cover that I found that i had not shaped the trailing edges at the tips.

As with the wings, all the die cut parts for the fuselage slipped neatly out of their sheets and very little sanding was necessary. The ply sides even have the numbers on different sides so that you could have printing inside or outside the fuselage depending on your taste, though the choice really depends on the side you want the on/off switch for the radio, yes, the aperture is there even for that. The body went together easily, as quickly as the wing, the square parts anyway. At this stage I drilled the front formers for the steerable nose wheel.

The only slight problem was the decking, it has an interesting shape and essential for the character of the machine. Dampen the 2mm balsa and it becomes beautifully pliable, then use white glue, pins and rubber bands and you have your lovely shape.

The apparently total prefabrication of the parts extends to the fin and tailplane (or vertical and horizontal stabilisers, as they are called on the plan.) If you rely on sighting only for getting the tailplane exactly in position, beware, the printing on the first former is on the slant (ever so slightly) consequently an optical illusion is created and it says that the tailplane is not square. Measure, do not guess.

The Attacker is suitable for .19 to .25 motors and I decided to use an HB .20 which was sitting idle in my workroom. The engine fitted nicely with just a fraction to be taken off the starboard side to enable the silencer to fit. The eoz tank supplied came without silicone or rubber tubing, however, the clunk was there and the metal tubing was very soft aluminium. When made up push the tank through from the wing bay. If it does not fit you have got it upside down.

Before I started covering I weighed the bare airframe, the wing weighed 11oz, the body 14oz. Reasonable I suppose. Heat shrink film was recommended, so that was what I used.

Having checked the ply servo trays before fitting, the servos fitted perfectly and with the vast amount of space available for the receiver and battery there were no problems here. The aileron servo and push rods initially fouled the rudder and elevator servos once the wing was in place. This was soon remedied by sinking the wing servo down in the tray so that the forward lugs went beneath the ply servo tray and screwing a piece of ply over the rear lugs. This held everything firmly. Engine, wheels and windscreen fitted (no transfers, there weren't any, the Dragons were mine) I had the second weigh-in. Total of 3lb 12oz, which is exactly half way between the limits they give, 16-1700gms. The CG was right so no lead was required. All that was required now was to wait for a lull in the gale and my son to put it through its paces. Building time was about 40 hours.

Building summary: A lovely little kit to build. With more precise instructions a raw beginner could do it, but what would a beginner be doing with a low wing fully aerobatic job? Perhaps the flight test will tell. Over to you Dave.

Flight test: The wind was blowing at about 10-15mph (gusting 20) when we got to the field for the first flight. I was a little worried that this might have been a bit strong for the first time, but I need not have been.

After all the usual safety checks I started her up and taxied the plane around. I was impressed by the ground handling of the model on our rough strip. The wind did not affect it at all and I did a 360 degree turn without any difficulty. Then it was time for the take off. First I tried a ground launch, but l found that the rough strip slowed the plane down too much so it only remained for Dad to give the plane a good heave and it was airborne. I found I had to feed in some right aileron and a touch of up elevator to get it flying straight.

The ailerons are quite sensitive at the recommended setting, but the elevator and rudder seemed about right. As the wind had increased slightly I did a few fly-pasts for the camera (none of which came outl) and then landed to wait for a better day before trying it out properly.

The weather was perfect for the next flight so I took off and climbed up to a good height to check the stall. I could not get the model to stall from straight and level flight. However, in a climbing attitude the model will stall and drop a wing, which could lead to a spin. Recovery was easy enough though, just put on opposite rudder and ease forward on the elevator. Obviously one does not want this to happen on take off or you could end up with a new kit!

Then I tried loops. As long as the speed is kept up the model will loop perfectly, but enter the loop at too low an airspeed and the model will drop off the top of the loop. Immelmans, Cuban eights, outside loops, could all be performed with ease and with those sensitive ailerons rolls are a dream. Inverted flight was no problem, just requiring a little downtrim.

The spin looked good too, needing only rudder and elevator, however to recover it needed opposite rudder and down elevator as for full size aircraft.

Care must be taken when landing the plane dead stick as the glide cannot be stretched too far otherwise, if the model is in a nose-up attitude, it may drop a wing.

Flight summary: I found this model very enjoyable to fly and I could happily have stayed all day flying it. If you want to fly on 3 channel gear it would have to be aileron, elevator and engine.

I would recommend this model as an aerobatic trainer for the moderately experienced pilot before he progresses to the larger aerobatic models, or just as a fly-for-fun aircraft." 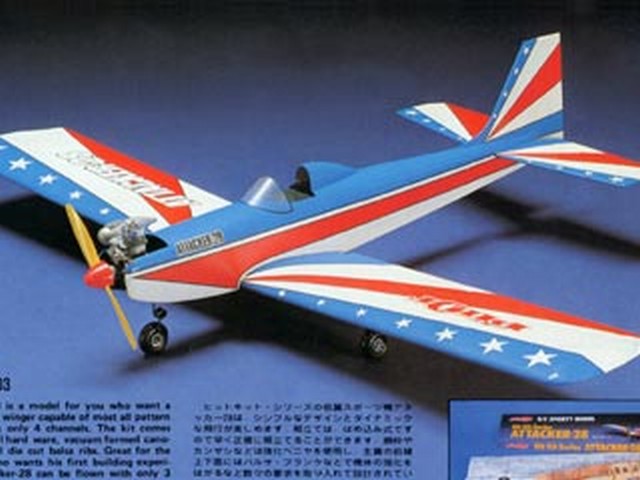