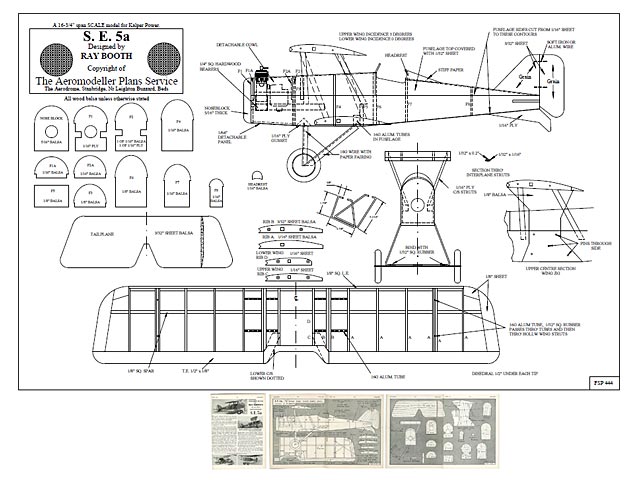 Quote: "THE SE5a needs no introduction to most aero-modellers. Probably more scale models, both flying and solid, have been made of this machine than any other type, and our American friends in particular have long favoured the SE5a for scale modelling.

Following the success of the writer's Avro 504K (oz1554) featured in the December 1949 issue of Aeromodeller, a number of local modellers expressed a growing interest in flying scale machines, but a large number of modellers were inclined to reject them on the grounds that they took too long to construct. With the SE5a model therefore, the primary design considerations have been simplicity combined with robustness. The original survived some terrific 'prangs' in atrocious weather.

Construction is quite straightforward and should not present any difficulties, even to the newest recruit to this hobby of ours. The completed machine, which weighs 4-1/4 to 4-1/2 ounces, should balance about 3/16 in aft of the lower wing leading edge. With the CG at this position, the aircraft is, in actual fact, somewhat nose heavy, but this tendency is countered by rigging the tailplane at -3° incidence. When fitting the motor, ensure that the thrust line is offset 2-1/2° to 3-1/2° to the right.

Since the wing loading is rather high (about 7 ounces to the square foot) the model glides rather fast. Consequently, it should be glide tested over long grass..."

Quote: "The SE 5A was a free plan in the magazine and designed by Ray Booth. It was designed around the Kalper and had a 'massive' span of 16.3/4 in. The original plane had ideal proportions for a flying scale model and I have no doubt this little beauty would give many hours of pleasure."

Scan of the article, text and pics. 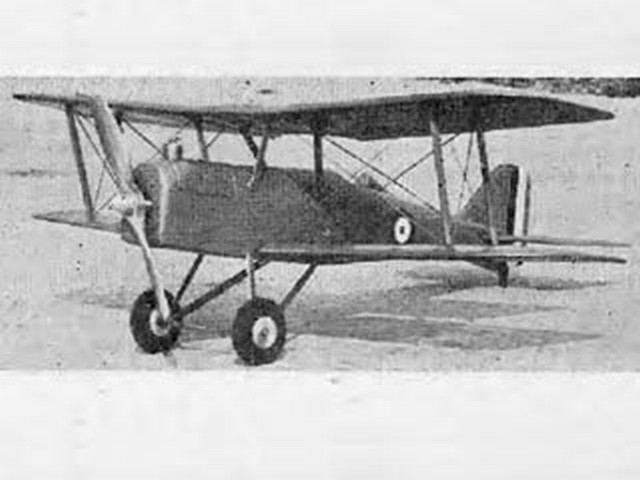