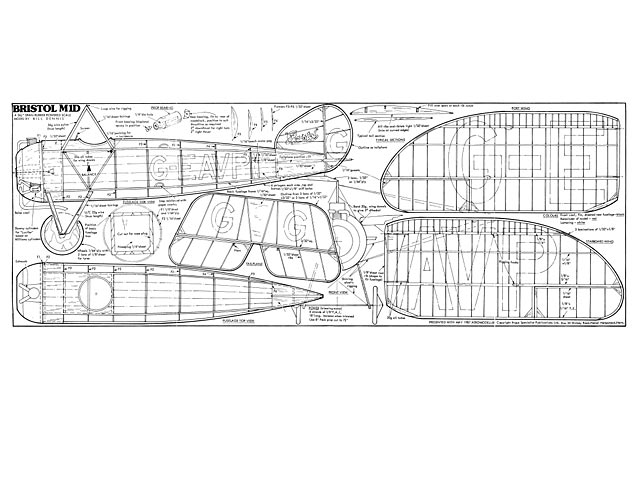 Quote: "Try a Red Racer. Build our Bristol M.1D. Especially for Scale enthusiasts - this Twenties racer is hot from Bill Dennis' drawing board .

I CAME AWAY FROM last year's Indoor Nationals fired with enthusiasm to build an exotic successor to my Avro Avian (oz2922) - so much so that I gave the Avian away to force myself to produce a new model! However, as we all know, there is never enough time to build all the models we would wish, and eventually the main criterion for my choice of subject was simplicity.

The Bristol Monoplane has been tackled many times, of course, but usually in its M1C version, the one with the enormous spinner which makes alterations to the thrustline a real problem. The M1D presented here was fitted with a Bristol Lucifer engine, and was raced successfully in the early 20s. Finished in scarlet and black with extensive white lettering, it is also an extremely attractive subject. However, nobody would claim that it was an ideal configuration for a rubber model. Bearing in mind its very short nose care must obviously be taken with the weight of the rear end - and remember that there is a weight limit of 85 grams for models entered for Indoor competitions (this year, at least).

The main lesson I learned from the Avian (published in the February 1986 Aeromodeller) was the benefit of designing the model as large as possible, using the weight rule to its maximum if necessary, in order to get a realistic appearance.

The Bristol is a deceptively simple model which goes together quickly. It would certainly make a super CO2 model, probably with a saving in weight too, and I shall probably convert it after this year's Nationals. Perhaps someone will beat me to it?

Build your Bristol! There is a lot of wood in this model, so choose it carefully to do the job needed and no more. After laminating the outlines to wings and tail, be sure to let them dry thoroughly for a couple of days or they will spring out of shape, eventually to cause warps when forced back. The wing tip ribs are cur down in length and are carefully shaped to correct section, sanding them with a long block. Fit the wing tubes with the aid of lengths of wire between each panel to ensure correct alignment.

The fuselage is built in the same way as the full size machine; that is, as a basic box with supplementary formers and stringers. A common error is to assume that the fuselage cross section is circular throughout but this is not the case, as it is almost rectangular at the position of the tailplane leading edge. The best way to make sure you get this right is carefully to sand the stringers while referring to photographs of the real G-EAVP!

The aluminium tubes for wing dowels and undercarriage are now fitted, and sheeting follows. The round nose cowling is shaped from balsa and hollowed, although a plastic moulding would look better. A reasonable facsimile of the Lucifer engine can be based on the large Williams dummy cylinders available from SAMS. The prop shaft is carried on two tinplate bearings, the rear of which can be adjusted to alter the thrustline. This is so much better than using bits of packing behind the noseblock..."

Quote: "...a very nice scale rubber model of the Twenties racer the Bristol M1D from Bill Dennis. This has long been a popular scale subject and the M.1D version was powered by a Bristol Lucifer engine saving the making of an enormous spinner and giving the opportunity to add a little bling up front. Bill designed it for rubber but suggests it would also be very suitable for CO2 power with useful weight savings to be made." 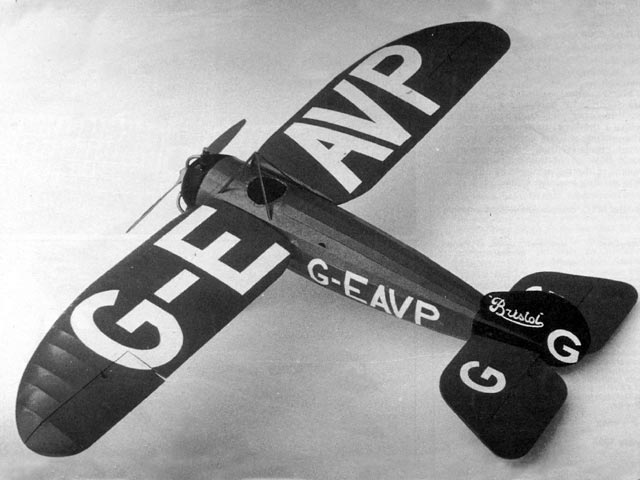 Here are a couple more photos of another model, this time the Bristol M1D by Bill Dennis from Aeromodeller, oz number oz2991 [more pics 005-008]. A bit of a change here, I built this model as the WW I Fighter that it was to start with, not as the later racing version, mainly to try out some coloured tissue I had recently bought that I thought may look the part. It turned out to be one of the nicest models to build, cover and fly. Eventually of course, the tissue started to deteriorate so I sold the model along with the proviso that they re-covered it!
John&Kath_French - 11/02/2019
Original RCG scan is the better one... I think
fred - 19/05/2019
Add a comment