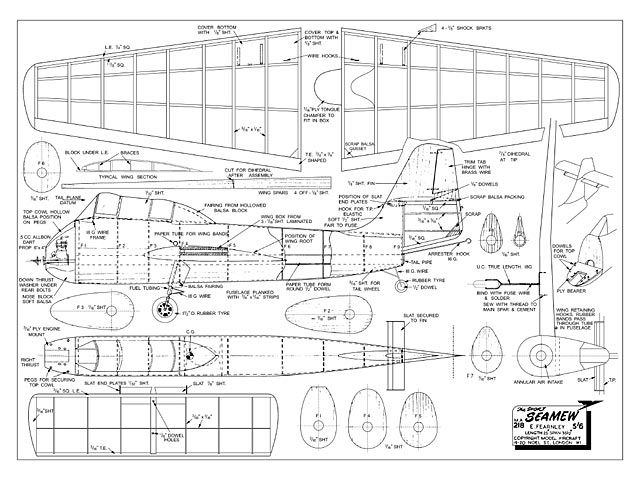 Quote: "A successful flying scale model of an unusual prototype, powerd by a half cc motor. The Short Seamew, by Eric Fearnley.

It is not often that we can get down to modellingand flying a 'restricted list' Royal Navy type and power it with the simple Dart and a 6x4in plastic prop in these days of multi-engine and jet types. However, in the Short Seamew we are fortunate in having a prototype using the Siddeley Mamba turboprop engine, so that although we have a jet orifice and tube (used in the model to form a fuel exhaust and backbone at the same time), we also have a propellor for flying purposes.

Do not be misled by the rather unusual aerudynamic form of the model - it has in fact great stability in flight, and will glide some six or seven times its height from a hand launch when properly trimmed. Directionally stable, its high fuselage gives a high CLA - which is better than dihedral and it also has great strength in its simple outline. Weakness in having a close coupled tail is well compensated by the enormous wing chord, which acts in the best flying-wing tradition, minimising the work of the tailplane. In addition, the actual tail area is extremely large.

Provided reasonable care is used in setting the tail as indicated on the plan no trouble should be experienced in trimming the model. The main thing is to trim the tail to the flattest glide possible, and then add down thrust to dampen the stall under power. Mine needed two washers under the beek bolts bolding the Dart to get an uneventful power-on flight path, which is quite considerable. This is caused by having the mainplane at low in-cidence for building ease, plus a very low thrust line. Even when stalling, however, my model maintained a straight trim, refusing to fall off on a wing and spin as so many low wing types tend to do. This is the position of the CLA again, of course.

The prototype balanced just behind the wing mainspar, and needed no weight adding; however, this may not be so with some models as with colour dope trim, heavyweight tissue, and furl proofer it is slightly in the heavyweight class. A less elaborate model will be much lighter, and have an even better flight performance. The Dart has more than enough power for the model, and needs keeping throttled back about quarter of a turn on the compression lever from the 'hot' position, at least until a satisfactory trim is established.

Fuselage. The basis is a paper tube which is made by soaking stiff paper (I used single weight photographic paper) for a few minutes, and wrapping it round a 1/2 in dowel with strip elastic; remove and cement along the join. 1/32 in baha sheet could be used instead if desired..." 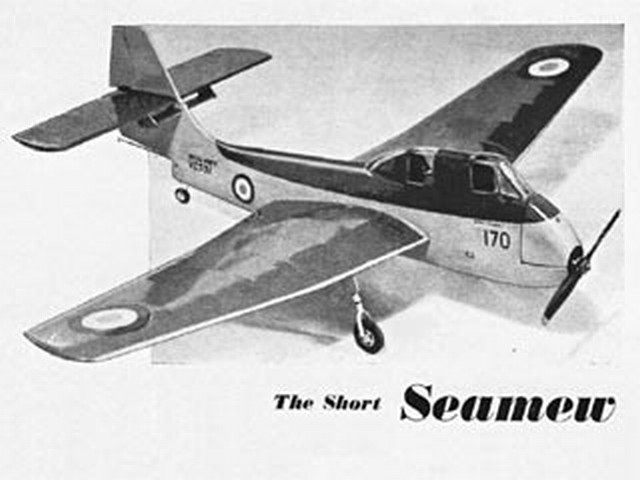 Short Seamew wing rib templates are missing. Picky, picky, picky? :-) Thanks for a great website!
KenBGarfield - 01/07/2014
Not sure, but the plan does look complete to me. The article text says the wings are made 'using the cap-strip method' I guess individual ribs don't need to be show on the plan, for that.
SteveWMD - 01/07/2014
Add a comment