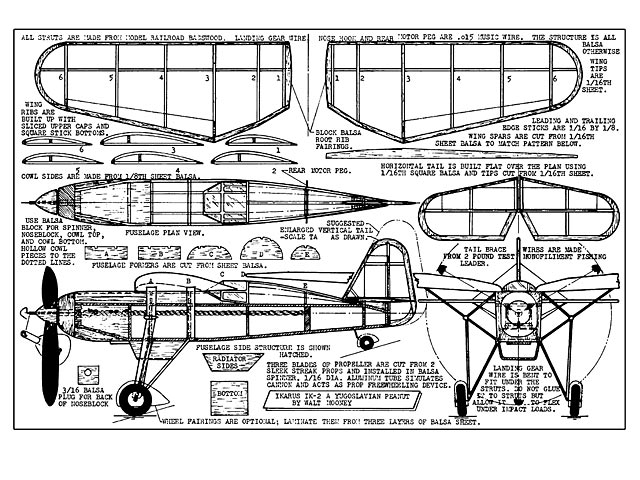 Quote: "Here's a Golden Age fighter that made it into the early part of World War II. The long nose and landing gear lend themselves well to rubber power, but check that fin area, you'll need a lot!

Two sources of information are available for a three-view of this interesting Yugoslavian design. Aircraft Profile 242, 'IK Fighters' (Yugoslavia: 1930-40's) has consider-able information, as well as a three-view and several side views in color. 'Warplanes of the Second World War, FIGHTERS', volume four, on page 203-204, also covers the IK-2, and has a three-view. This model was drawn up from this latter three-view.

When German forces invaded Yugoslavia in April 1940, eight of these fighters were still serving with the 34th squadron of the 4th fighter regiment, and took part in the early fighting. This design shows some of the influence that the Polish gull-wing fighter designs had on other aircraft designers. However, the designers of the IK-2 obtained their gull-wing effect only in terms of the chord and thickness of the wing. The spar was not bent, and as a result, this little gull-winged peanut model is a little easier to build than might otherwise be expected.

The author (ole prof, or whatever other names have been hung on him) expected this model to be an excellent flier, and easy to trim. Sic transit gloria! It sure didn't fly right off the board. Early test flying revealed a nasty spinning tendency. Standard cure-alls, such as washing-out the wing tips and moving the center-of-gravity forward, were of little avail. The final solution was the addition of more vertical tail area. A piece of clear plastic was added to the vertical tail, as shown by the phantom line, and then the model flew relatively well. Best times have been on the order of twenty five seconds, which is somewhat disappointing. However, there is no doubt that someone will build a lightweight version that will give much increased flight times.

The model is basically a simple design and uses very conventional structural techniques. The wings and tail surfaces are built directly over the plans. Both the horizontal and the vertical tail are flat structures. Note that the horizontal tail is built in two halves, and is later attached on each side of the vertical tail. Sand the leading edges of the tails round, and the trailing edges to almost a knife edge, for better aerodynamic streamlining..." 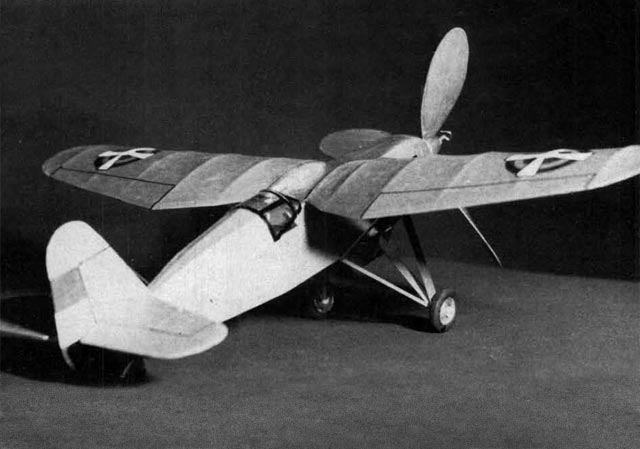