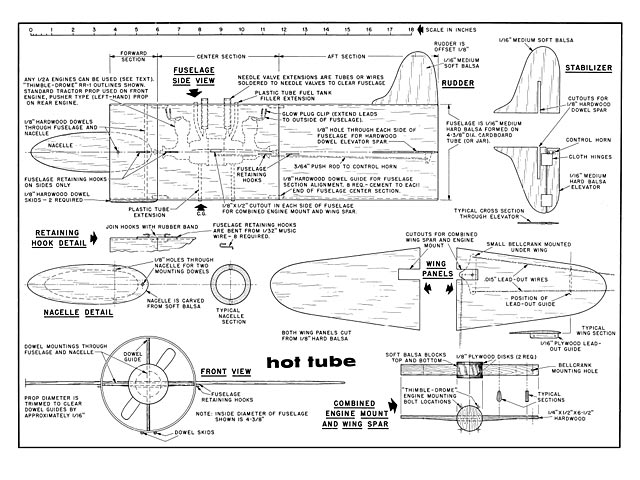 Quote: "Inspired by the French Ledic ramjet, this prop-in-the-barrel job is an experimenter's delight. Using two of the Half A's for thrust, it blasts off like a rocket. Hot Tube, by JL McLarty.

The French Leduc 021 with ram-jet engines inspired the design of Hot Tube. The Leduc uses a Turbomeca Turbine and a series of burners. Hot Tube uses one or two .049 glow fuel burners and with two engines producing thrust over twice its weight Hot Tube launchings are like blast-off time at a rocket base. No flames of course. Single engine performance is exciting, but the off beat whine of the two engines and the stepped up performance with the added power is worth investing in another engine.

To summarize, Hot Tube is an all-balsa control-line model with sheet wing and tail surfaces and a sheet-balsa fuselage made over a large cardboard tube. A balsa nose is doweled in place. No landing gear is provided but two bottom skids take some of the wear and tear. Launches are usually by hand or in vertical rocket style after practice. The engines are mounted back to back on a hardwood mount which extends into the wing spar and also is a mount for the bellcrank. A comforting thought is that even if the nose, fuselage, tail and wing should somehow be torn apart, the control lines will still be attached to the engines. The fuselage is in three sections to allow easy engine start-ing and is indexed by dowels and held together by rubber bands between wire clips on each section.

The principal part of this flying machine is the tubular fuselage; this is formed using 1/16 medium-hard straight-grained balsa sheet in the following manner: a cardboard tube of 4 to 4-1/2 inches outside diameter, such as obtained in a rug store, is cut to about 17 in length and smooth wrapped with wax paper. Next, the balsa sheet in 16 in lengths is cemented edge to edge to form one large piece 14 to 15 inches wide. On the side of this balsa which will ultimately be the outside of the fuselage, lightly draw pencil lines parallel to one another and at right angles to the balsa edge at the spacings shown on the plan for the forward, the center, and the aft fuselage sections. These lines will later be used as guides for cutting each section and from our experience, this is the time for such markings and not after the fuselage is formed. After this the penciled side of the balsa sheet should be lightly water soaked with a kitchen sponge. With this soaked side on the outside, wrap the large sheet, grain lengthwise, around the cardboard tube and hold it with spiral bind-ings of gauze or cheese cloth. Let dry over night or bake until dry under lowest pos-sible oven heat. Remove gauze and trim the balsa to the correct circumference by cutting lengthwise through the overlapping section, using a straight edgepiece of wood or metal. Cement these edges and join.

After the cement dries, carefully cut the fuselage into its three sections on the penciled lines. While the sections are still on the cardboard tube apply lightly one coat of non-shrinking type of paint such as household enamel. After this dries the fuse-lage can at last be pulled off the form. The eight hardwood dowels which index the three fuselage sections should be ce-mented on the sides. Note that the center section and rear section clips are below the center line to be clear of the wing. To pro-duce a long lasting model, cementing pro-cedures are very important. Always re-move paint, paper, or old cement until the bare wood is exposed. Apply thin cement coats to both items being joined and let dry before cementing once more and then joining when the parts are tacky. After the joined parts are dry, several thin coats of cement should again be applied with good drying times in between.

The wing spar engine mount combination is built up of hardwood stock with plywood disk facings and balsa filler as shown. The hardwood spar should be rectangular in the center and streamlined on its tapered portion out to the fuselage sides. From the fuselage out the section should be rectangular to match the wing. The engine can be bolted as shown or, if the engine mount is small, the bolts can pass through drilled holes in the plywood. The bellcrank mounting can be a tapped hole in the hardwood made either with a regular tap or a bolt threaded into an undersized hole. A locknut can be used on the top side although the tapped hole alone should give satisfactory service.

The wing and tail surfaces are straight-forward in construction as shown on the plan. The nacelle can be a soft balsa block split and hollowed after the outside con-tours are finished. It should be lightly joined to permit lightening or adding weights at balancing time for the model..." 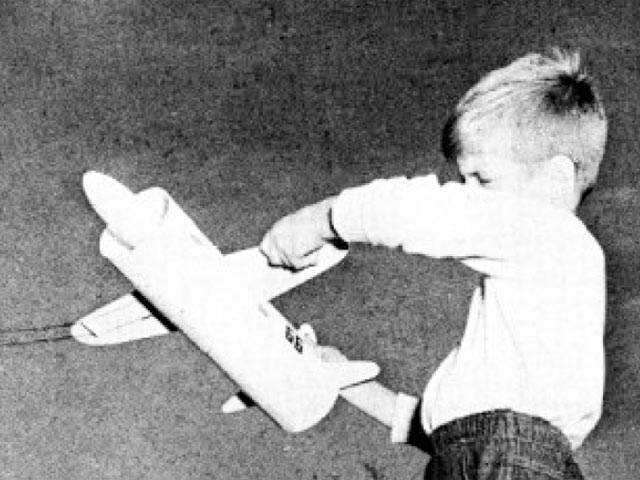