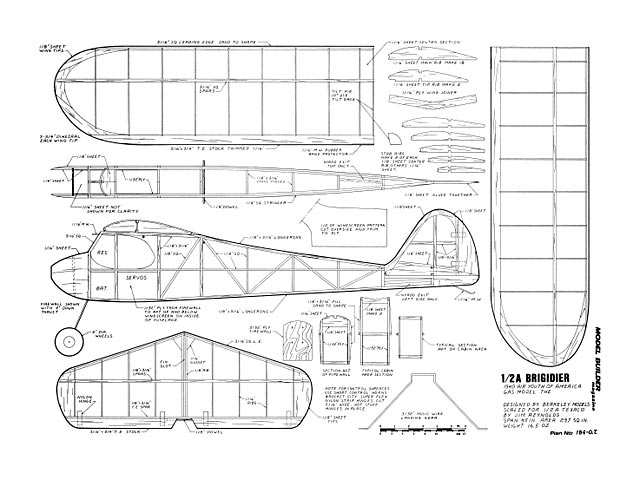 Quote: "The popularity of the 1/2A Texaco Old Timer event is on the upswing. If you are looking for a model to compete with, or just have fun with, this 82 percent Berkeley Brigidier will fill the bill. 1/2A Brigidier, by Jim Reynolds.

The 1/2A Texaco version of the 'Brigidier' (the spelling is Berkeley's, not mine, not Webster's) was built to generate some interest here in the San Antonio area for the Texaco event. From what I have read, heard, and personally experienced. 1/2A Texaco is a truly fun event. If you have been flying more, and enjoying it less, give 1/2A Texaco a try.

Any SAM approved Old Timer model can be used, that is, models designed, kitted, or plans published prior to December 31, 1942. It can be scaled up or down to any size. The engine must be a Cox Babybee, Goldenbee, or Blackwidow. The fuel tank is limited to the 8 cc stunt tank that comes with the Goldenbee or Blackwidow. And finally, the model must weigh a minimum of eight ounces for each square foot of wing area. The object is to stay airborne 15 minutes on 8 cc of fuel.

I chose the Brigidier as a 1/2A Texaco model because I had built a Berkeley Brigidier kit when I was a kid, back in the 40's. It was my first gas model. The model was never flown with power because I could not afford the engine. However, with the correct weight rock in the nose, it had a beautiful glide! I have never forgotten that model.

The original Brigidier had a wing span of 55 inches and a wing area of about 445 square inches. It seemed too big for 1/2A Texaco. By reducing it 18 percent, the wingspan came to 45 inches and the wing area was just under 300 square inches. It looked good on paper. There was enough room in the cabin area for two Ace R/C Bantam servos, a 225 mah battery pack, and a Royal Vanguard receiver.

There is nothing unusual about the Brigidier's construction. The wing and the tail were completed first, so they could be attached to an uncovered fuselage. This way you can move the RC equipment around to get the balance point right, without punching holes in the fuselage covering. The plans show the location of my radio equipment. My servos were put in with thin servo tape, but servo rails could be used, too.

The landing gear wire slides up into a slot made by some 1/16 ply pieces glued to the 1/32 ply fuselage doublers. It is then epoxied in place. The needle valve of the Blackwidow was too short to clear the top of the firewall. An extension was made by..." 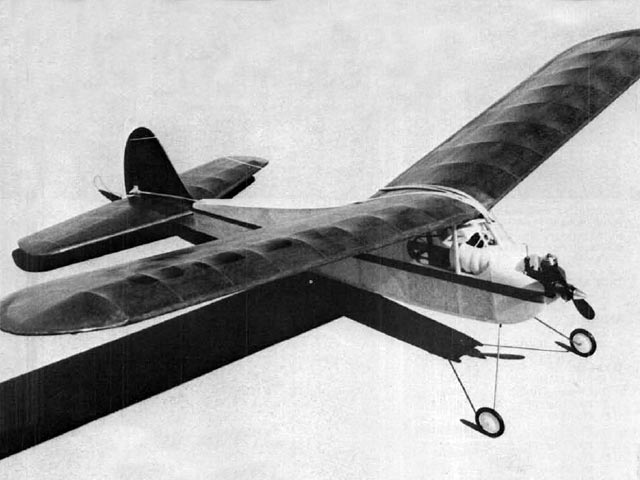 A fine 1/2A Texaco plane that I scratch built in 1985, covered in Monokote and stuck on a Cox Golden Bee. Capable of OOS flights every time. Now converted to electric. One thing for sure: beef up the fuselage at the tail, it's notoriously weak there and prone to cracking off - ask me how I know that! :)
Robby - 05/06/2020
Add a comment