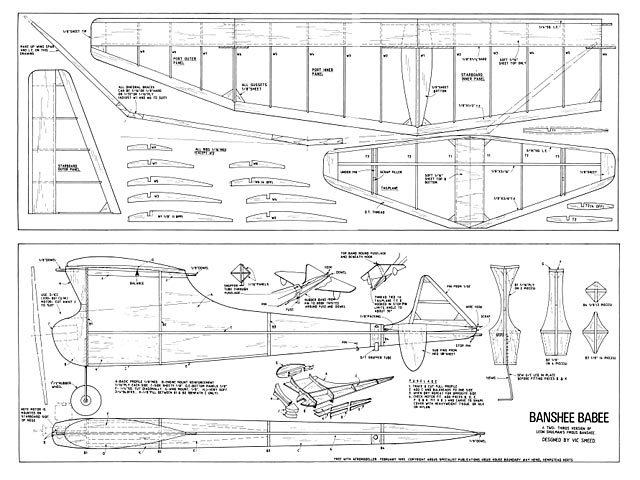 Banshee Babee. Free flight power model. A smaller scale version of the original 1940s Banshee pylon model by Leon Shulman. This version is 2/3rd size and can be powered by any .5 to 1cc motor.

Quote: "Vic Smeed revives one of the truly classic models which influenced design philosophy for many years.

Leon Shulman's Banshee (oz1192) more or less exploded on to the modelling scene in the States in the early 1940's, but the shock waves didn't really hit Britain until after the end of the war. Even those of us who had come to terms with the appearance of pylon models such as the Goldberg Zipper, thought it a monstrous looking contraption and it's effect on the Russell/Bowden school was sheer horror. There was, however, no denying it's performance and the unusual flight characteristics made it relatively safe to trim. A considerable advantage when it is remembered that few British modellers had much in the way of power experience.

The design found some keen proponents and examples won at the British Nationals in 1947 and 1948 as well in innumerable other contests. It was kitted by Astral in 1947 and remained around on the contest scene for some four or five years. People gradually got used to the (then) unorthodox appearance and nowadays veteran fliers who shuddered when they first saw it 45 years ago now look back on it quite fondly.

Having met several contemporary clubmates of the designer, but not the man himself, a remark in casual conversation set the idea of a small scale version ticking away; I was looking for something .049 size and recognisably vintage, and you can't get more recognisable than a Banshee. A quick shunt around with figures gave the simple scale of 2/3rds size, ie 33.3 in span, as being the ideal for .049.

Some simplification of the structure (such as fewer ribs and formers) was desirable but the fundamental shapes and structural design approach were retained. The result is a model which requires a degree of care, particularly in the wing construction and which could not be recommended to an absolute beginner, though for someone with a little experience it is quite quick to build and surprisingly sturdy.

The model in the photos weighs exactly seven ounces and is powered by a 1950 DC Merlin. It climbs vertically, gradually slows, falls over on it's back and virtually flick half-rolls upright to climb vertically again and repeat the process fifty or sixty feet higher, very like the flight pattern of many 1940/50 Banshees. Given a shade more power it would climb vertically without the interruption, again like the full size model. It has a very reasonable glide and with careful trimming, keys on the wing and tail and a good motor it could be quite a serious contest machine.

The Babee was not intended for publication but I have been asked for the drawings, so here they are. I hope that Leon Shulman will take it as a compliment and not a barefaced lift of his design!

Construction. Sketches on the plan show the fuselage assembly, which involves some tracing of parts and eye for alignment when the second half is added, The sandwich nose puts the thrust line 1/8 in off centre but this offers no problem. The 1/8 sheet box formed by the pieces A,C,D and K securely anchors B1 and the soft blocks J lock the ply panels B to B1. Note that one B panel needs to allow for the undercarriage wire vertical and the other requires just a notch..." 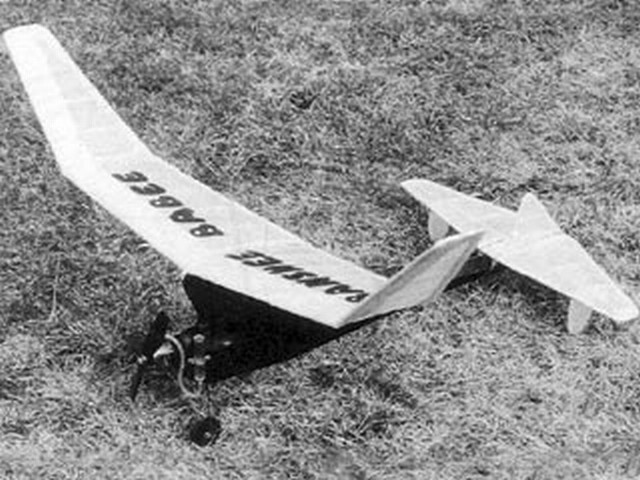