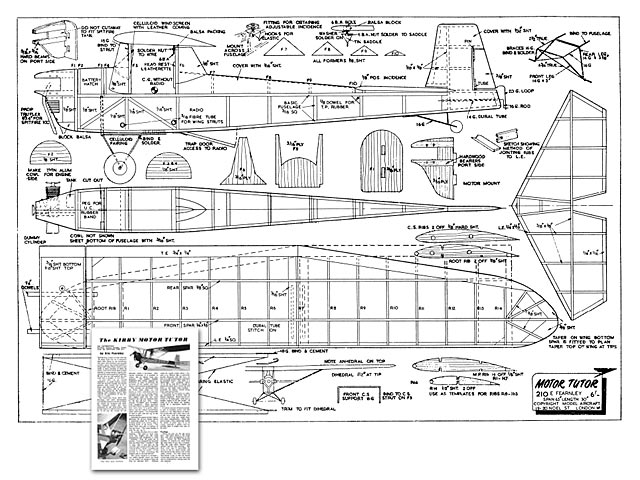 Quote: "An interesting flying scale model that can be adapted for R/C. Kirby Motor Tutor, by Eric Fearnley.

The first contact we had with the Motor Tutor was on a summer's dusk while flying at our aerodrome site, when club members were startled to find a plane that looked half BA Drone, half Luton Minor, circle us and make a smart landing at about 30 mph. Out of the (very) open cockpit jumped a young man in a sports coat, who said he had come from Yorkshire. By the time we had pushed the aircraft into a hangar, it was dark.

A year later at our annual exhibition we made further contact with the aircraft through the second partner, who turned out to be a local, and afterwards he gave our club an excellent talk on gliding, with films loaned by the Yorkshire Gliding Club members, and I then realised the possibilities of this aircraft as a model.

The instruction book, three view drawings, and some photographs were kindly loaned to me, from which the model was designed and built. The finished model has been examined by the pilot-owner, and he says that it is true in every way as far as he can see, except for the dihedral which is increased. After careful trimming it is possible to reduce this to almost scale proportions. The makers, Slingsby Sailplanes Ltd, kindly supplied information to assist in ensuring the accuracy of the model, and have shown a keen interest in photographs.

The aircraft was developed from the Kirby Tutor glider (so well known to ATC members) and was intended to be a low priced power machine which was easy to fly. The first engine used was the Scott Squirrel, but this was replaced later by the Jap 36 hp twin. Two aircraft, G-AKEY and G-AKJD, were completed. These machines have been flown by glider pilots who have never been in a power plane before, and the maker's specification states, and I quote - It is impossible to stall or spin with the CG in the normal position.

Although the span is greater than a Hurricane, the 36 hp engine allows a maximum speed of 71 mph, a cruising speed of 67 mph, and a landing speed of 38 mph. The Motor Tutor uses only 2.2 gallons of fuel per hour. The wing loading is 4.83 lb per sq. ft. As a model, the plan view is rather shaking. The span is more than twice the length, the tail looks inadequate, and altogether it looks 'different' from the usual run of models. I was reassured by the pilot that the Motor Tutor wouldn't stall or spin, that it was easy on the controls, and would in fact fly itself. I shook off the 'thirds' complex and pressed on with the model. It has proved, as a flier, everything the makers state of the real aircraft.

The power required is nominal - my Allbort Spitfire diesel was fitted as the model was designed from the first for ultimate R/C. Without radio the model weighs about 1 lb, and is so efficient that it positively hurtles skywards with full revs; in fact it is well overpowered, and must be throttled down. The radio is a lightweight unit weighing about 10 oz all in, and this is enough to steady the plane down nicely but still leave a very light wing loading - probably the lightest loaded flying scale radio job possible.

Full details of conversion to radio are scheduled for a future issue of Model Aircraft. Those who do not intend to fit radio gear could get a smaller engine to fly the model. If radio is to be fitted, the Spitfire would be a minimum choice of power.

A certain amount of hardwood ply is used at strategic points, and the result is a very high factor of safety. On its first day out it flew into a car at full revs, and the damage was only on the wing tips, which have now been strengthened. When the power stops, it has a glide that would do justice to some A2's - it is, of course, basically a glider, and on suitable days it might even pay to fit a d/t!

Fuselage. Mark out and cut the ply parts first. The basic frame is the usual box, with sheet strengtheners in the nose. Choose the four longerons carefully to match - cut them from the same sheet if you use a stripper. The ply and other formers are added, and the top sheeting. The front cowl top is removable for access to the u/c shock bands, and this also forms the battery box in the radio version. For this reason the first former is ply to take the shocks of the high thrust line, and this must not be weakened by cutting away for any purpose..."

Update 17/11/2012: Replaced this plan with a clearer version, thanks to mikewight. 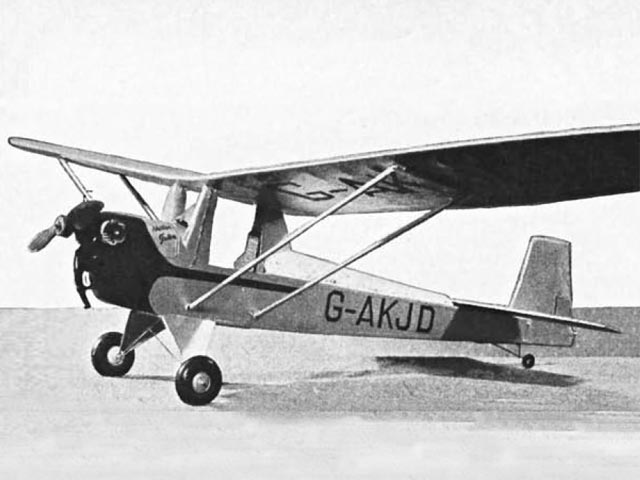