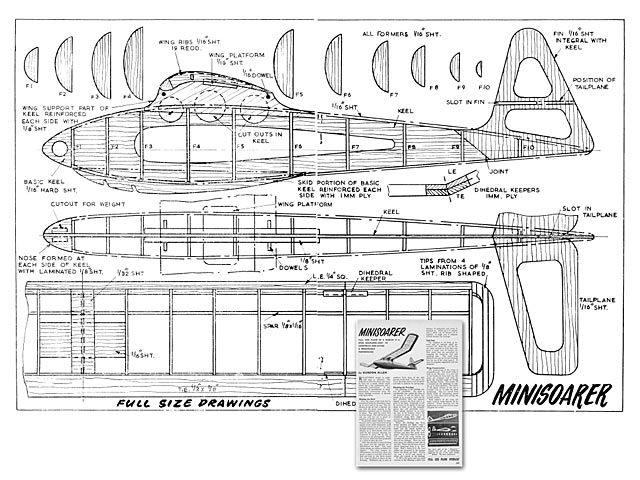 Quote: "Full size plans of a robust 18 in span sailplane - easy to construct and giving a reasonable performance. Minisoarer, by Gordon Allen.

RELATIVELY simple to make and easy to transport, this sailplane is ideal for those who want to turn out a small, robust model which has a fair appearance and a reasonable performance. It also serves as an introduction to semi-monocoque construction since the entire fuselage structure is skinned with sheet balsa.

Making the Keel. First, the shape of the basic keel is transferred from the drawing to hard 1/16 in sheet and is cut out. The fin section at the aft end is likewise cut out with the grain running in the direction indicated and is cemented in place. Pins hold the entire keel to a flat board. The half farmers are cut out and one set is glued in position on the face of the keel.

To provide added rigidity to these formers and to save them from being broken away while subsequent work is being carried out on the rest of the fuselage structure, two or three of the slender, 1/16 in sheet planks which are used for the eventual skinning are cemented in place side by side as indicated in the photograph. These are 3/32 in wide and taper gradually to a point at their aft ends.

After this the keel is removed from the board and the opposite set of half-formers are fixed. Two more centre planks are added as before for rigidity. The wing support reinforcements, cut from 1/8 in sheet, are glued in place at each side of the keel and two 3/32 in dia. birch dowels 3/4 in long are fitted as shown on the drawing. Millimetre ply is used to
reinforce both faces of the skid portion of the keel. Two pieces are cut to the shape shown and are glued and held in position by spring pegs.

Planking the Fuselage. The planking of the fuselage can now be completed. For quite a considerable way round the rims of the formers it will be found that planks 1/16 in to 3/32 in wide can be used provided they are tapered slightly towards the front and to a point at the back. Eventually it will be necessary to fit planks of varying shape in order to fit the irregular spaces that will inevitably occur. Those planks situated at or near the tops of the formers, where the curvature is severe, will have to be chamfered along their edges to produce reasonably flush joints with one another..." 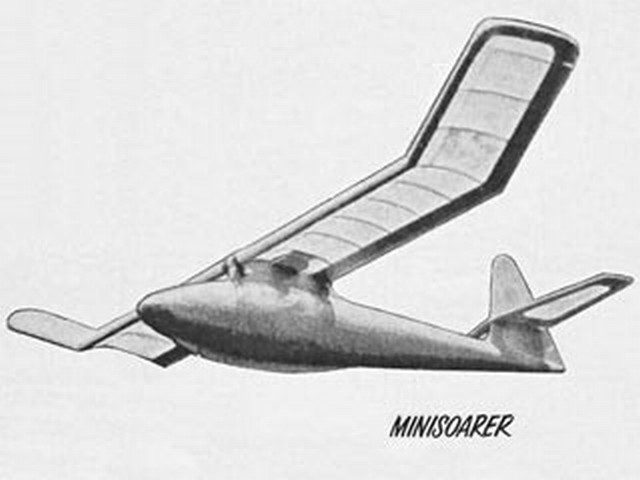 Hi Mary, almost finished a 1 meter version of the 1955 Minisoarer [pic 003]. l have rudder and elevator r/c control, covering next, then having to wait till our lockdown is over in Melbourne Victoria before we can fly again.
Once again thank you for your great plan service, regards
MarkI - 11/09/2020
Add a comment