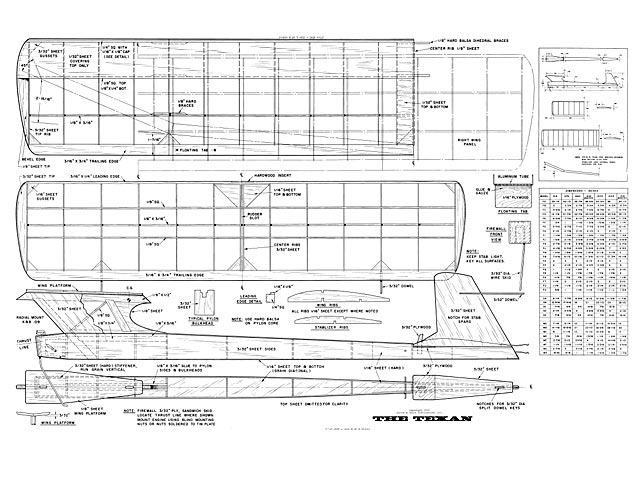 Quote: "The Texan originated early in 1952, with both Jim Summersett of San Antonio, Texas, and myself designing and building the first two 660 square inch planes. Both proved quite successful in Class B-C, with my entry taking fifth in Class B Open in the 1952 Nationals.

Since the two originals, dozens of models have been built in the sizes listed in the 7-plane 'size' table. Many wins and places have been won with the de-sign, most notable being two firsts, 1/2A Open, B-C Open, and fourth in Class A Open at the '58 Nationals. This latter is the model featured here.

Actually, the design has changed little since 1952. Major changes have been cleaning up, lighter construction, and the use of smaller engines with larger areas. Percentages remain the same as the orig-inals. I have conducted many experi-ments with airfoils, pylon height, rudder area. Tip plates were tried, but finally discarded, as no particular benefit seemed to be gained.

The model has the ability to handle a terrific amount of power with excellent VTO characteristics. A 'wild' engine is just the ticket for the design. So, if you have a hot .09 collecting dust, clean it up, and let's get started with the model.

The construction of the Texan is simple. Once all the parts are cut out, it is amazing how rapidly it will go together. Contest balsa should be used throughout, and every attempt should be made to keep the stab as light as possible.

Wing and stab should be built and finished first to provide curing time. Cut out rib templates from 1/16 thick plywood. Be sure they are accurate. Wing ribs which have 1/32 relief for planking are 1/16 medium sheet with the excep-tion of dihedral ribs. Notch trailing edge carefully and pin down with spar and leading edge. Notice that the wing LE has a 1/16 x 1/8 cap strip in order to obtain proper LE airfoil. Glue in all ribs with exception of dihedral joint ribs.

Bevel a light piece of 1/8 sheet balsa and glue on at a 45 degree angle for the wing tip. Do not install top spar at this time.

Allow to dry, remove from plan, and with a straight edge laid on top of ribs, mark curvature of wing tip. Carve and sand to the level of top of the ribs. Don't forget to relieve forward portion of tip to accommodate 1/32 planking.

Construct the right half of the wing in the same manner. When dry install tip dihedral, ribs, gussets, and hard balsa dihedral braces. Next comes center dihedral, braces and top spar. When assembled, the leading edge planking may be installed. Butt joint it behind the leading edge, glue to all ribs and to the top spar. Pin down until dry. Take pains in installing this planking to insure a strong, smooth and neat job. Then plank the bottom and remainder of the top center section.

Sand the entire wing carefully and accurately. Use plenty of elbow grease. When sanded, apply at least two coats of 50-50 clear nitrate dope. Sand between coats with 320/0 wet or dry paper..."

Direct submission to Outerzone. Thanks to BrianCox for help with the designer on this one. 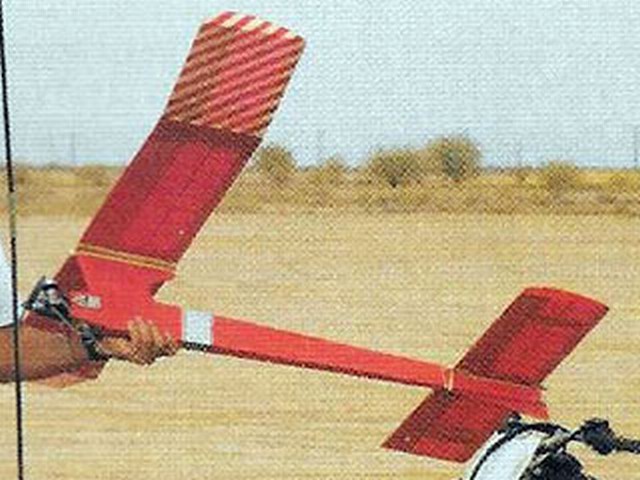