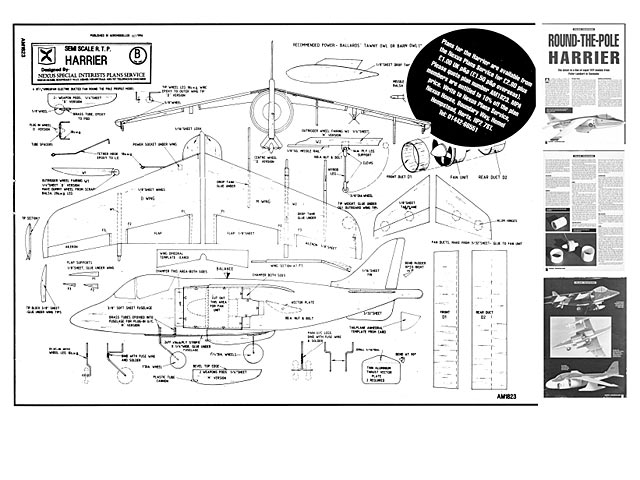 Quote: "The latest in a line of super RTP models from Peter Lambert in Tasmania. The Harrier.

An article of mine in March '95 Aeromodeller describing ducted fans for RTP created considerable interest, but the thought of constructing their own fan unit still deterred some modellers. Luckily it is now possible to buy a ducted fan unit to suit most of our RTP models. The Tawny Owl and Barn Owl fan units sold by Ballards' are suitable for either a 12 or 18V motor and with a relatively low current demand, compatible with most RTP control systems. I've found the thrust/weight ratio about 10% better than that of the hand made units I used on my 747 Jumbo and Airbus models.

The model featured here, based on the Harrier GR5, has been designed with one of the Owl fan units in mind. Although some liberties have been taken with the wing, the overall appearance is undoubtable Harrier. By utilising all sheet construction, building is simplified. The prototype was built in about five hours, requiring only the addition of nose and wingtip weight before demonstrating excellent flight characteristics.

Vectored Thrust. In addition to flaps, a special feature of this model is adjustable thrust vector plates which enable additional variations to flight patterns. Although nor capable of VTO, shortened take-off runs are possible by careful adjustment of the plates and a blast of full power! A little experimentation will reveal the optimum setting for short take-offs. On the prototypes it was around 15 - 20 degrees. The flaps and drooped ailerons (as on the full size aircraft) enable the model to fly quite slowly when power is reduced. These are shown on the plan as being fixed at optimum angles (which adds to the rigidity of the wing), although hinging in the same manner as the elevators would allow further variation to the flight pattern.

Warbird or Demonstrator. Two versions of the aircraft are shown on the plan. The military one incorporates drop tanks, rockets and plug in U/C and adjustable outrigger wheels. The manufacturers demonstrator dispenses with all these items, having instead a small fixed central wheel situated between the weapon pods, and another on the outboard wingtip. These are barely visible in flight and are sufficient for a brisk take-off. As to be expected the reduction in weight and drag enhances per-formance, although both versions are capable of fast exciting jet-like flight, and sound the part too! On 6.5 m (21 ft) lines and on full power (using vectored thrust) the prototypes quickly run out of air space in the local gym.

The design calls for the jet unit to be built integral with the fuselage, but with the reliability of modem electric motors this shouldn't present any problems provided good a quality motor is used. Both my models are fitted with a 12V motor although Ballards can offer these fan units with an 18V motor... " 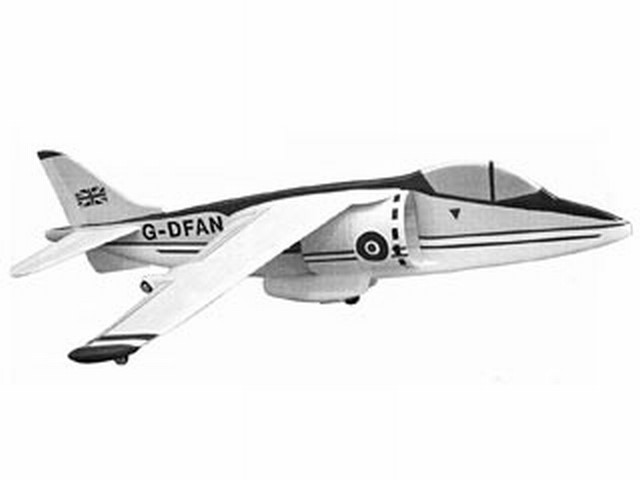