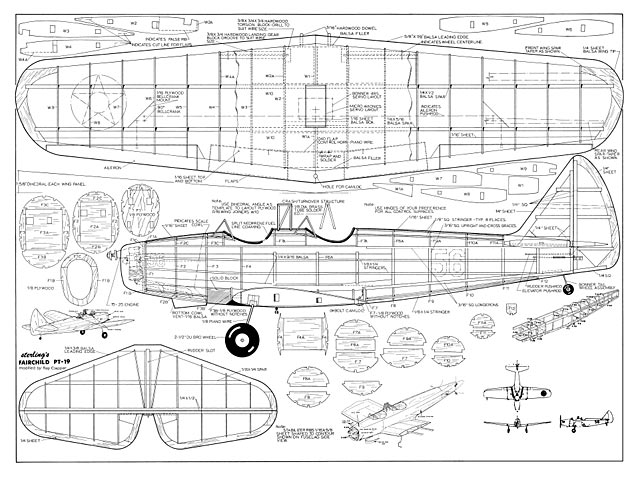 This PT-19 was built from Sterling's Fairchild PT-17 kit FS-5, and flies fairly well for a scale airplane. Weight is approximately 4-1/2 pounds using Micro Avionics R/C gear with all five servos; four in the fuselage and one in the wing. It flies faster than scale with an OS Max 19, but needs the power for take offs and landings. The flaps are a necessity probably because of the high wing loading.

The .19 will be replaced with a Super Tigre 23, which should increase the ship's acrobatic ability. With a Max .19 it will do the complete pattern, with the exception of outside loops.

Fuselage. The frame of the fuselage was built according to the Sterling plans, with the exception of not building the wing on the fuselage. The wing was built separately and camlocked in place. The firewall former, F-1A, is made from 1/2 plywood. The entire fuselage is planked with 1/16 balsa which makes it considerably stronger. This fact has been proven in a few good crashes. The planking adds very little to the weight.

Plans show that the top of the fuselage is removable, However, since the wing is removable it can be glued in place. A 1/16 inch plywood platform is added on the inside..." 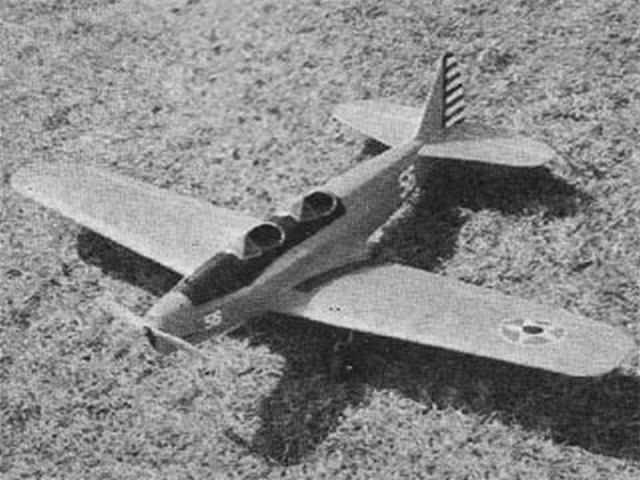 Model Airplane News said it was 43 inches, but that could not have been correct, as the Sterling Model is 48inches. Someone screwed up in 1958 when they set the type for the MAN Article. This means the parts for the 48 inch Sterling PT-19 are all right here....So I think. Haven't studied it entirely just yet, but I'm quite sure this has to be the case.
anon - 01/02/2015
Sterling PT-19 is a reduced version of the bigger famous Chuck Hollinger’ PT-19 72" inch WS (lately kitted by Jetco and SIG), same construction style and semi-wings system for regulable and brokenable dihedral bayonet for impact protection. Probably Chuck designed this version too for Sterling. Raymond Clapper PT-19 is based on the Sterling PT-19 kit with some modification, he made the wing in a single piece but increased wing chord to help the glide and central ribs are thicker to fit servos. Flaps were added. Considering that the fuselage uses the Sterling formers, he probably shortened the wing span for increasing roll capabilities or 43” is a simple print confusion with the similar number 48”. In the plan remained some reminiscent of the original Sterling plan construction sketches of fuselage. Attached photos of my father’s Sterling PT-19 in summer 1970 [see more pics 003]. Regards,
Pit - 01/02/2015
I think you are correct about the span - the MAN plan and 'How to..' article are intended to show what modifications are needed to convert the Sterling kit into a 5 channel RC model. The Sterling kit (FS-5) quotes a span of 48 inches on the plan and the MAN article says explicitly that Ray Clapper's RC model is a modification of the Sterling kit. He says in the MAN article that he modified the wing construction by making it detachable from the fuselage and by increasing its chord and thickness at the centre (to improve its glide and accommodate the rather boxy servos available in 1968) but he also makes it clear that his wing tapers to the original kit chord at the tip. He uses a different dihedral to the kit, but he says nothing about altering the span, so it seems he must have kept it at 48 inches. With regard to parts, there are many differences - most obviously to the wing because Clapper's version has ribs modified to increase the wing area and centre depth, and to incorporate flaps. Regards,
SBurling - 01/02/2015
Add a comment