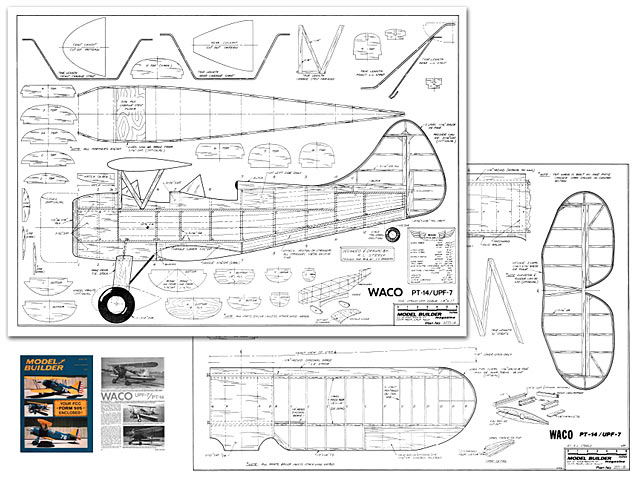 Dick Steely's Waco UPF-7/PT-14 from Model Builder issue 03-77 where it was traced by SA Patterson. The Waco was featured on the cover of that issue.

Quote: "The prettiest of a long line of pretty airplanes (and not just because they all happened to be biplanes), this one means a lot to the author because he's the lucky owner of a real one! Waco UPF-7/PT-14, by Dick Steely.

There was something about the Weaver Aircraft Company right from the beginning. The design of those fantastic looking new biplanes caught many admiring glances at airports around the country right up into the late 10s. They still do!

The Troy, Ohio airplane building firm had turned out many nice machines by the mid-30s, to provide the much admired vehicle for the budding needs of a growing aviation industry. I wonder if they knew at the time that those needs would be shortly channeled into the military pilot-training needs of a nation soon to be fighting for it's very survival. I doubt it.

Intended for civilian use, the UPF-7, produced in small numbers by comparison with many other trainers of the day, was soon to be the most singly produced WACO aircraft in the company's history. Between 1937 and 1942, 600 were built for use in the civilian pilot training schools around the court-try. The yellow wings, royal blue fuselage and oversize insignia were familiar sights around many airports. Oddly, only 13 were actually military aircraft, the remainder being used by the civilian pilot training schools, who were in effect, training the pilots who would take part in World War II. Very few are left, only a little over a hundred, and one of them is mine!

The radio controlled model size was determined by taking the Aeromaster (oz1971) wing chord, and the airplane in general, so the characteristics should be quite simlar in handling and performance. 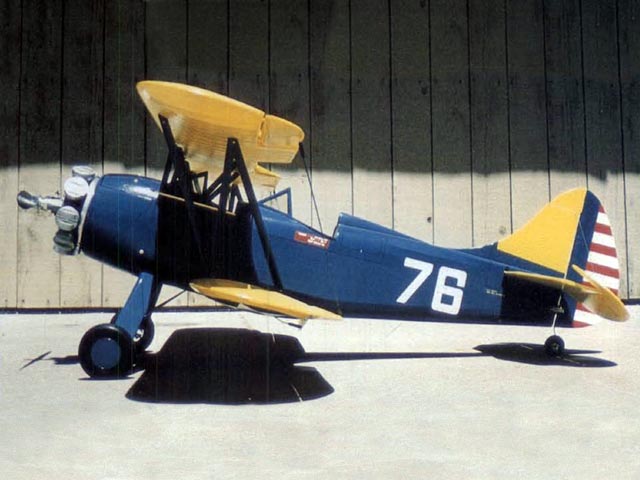