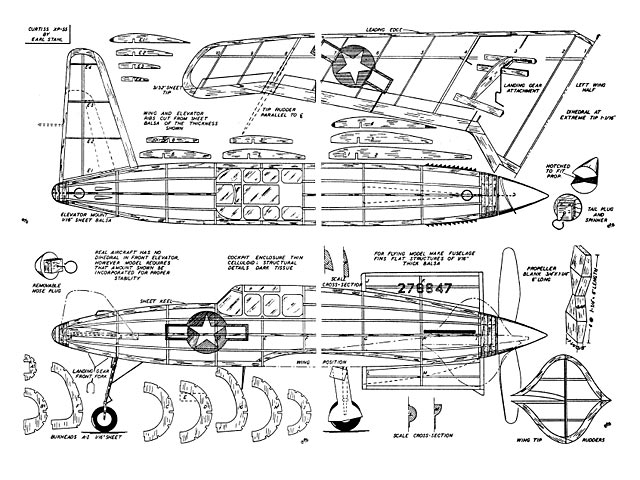 ONE of the most unusual Army Air Forces research projects to be revealed to the public by the Air Technical Service Command is the Curtiss XP-55 Ascender, a tail-first, pusher fighter. Canards, as this type craft are known, are not new for it will be remembered that the Wright Brothers made their first flight in a tail-first biplane. During the early days of World War I however the familiar tractor planes gained favor, and until this day have reigned supreme. Nevertheless, numerous advantages are claimed for military planes of this pattern and Curtiss' experiments along these lines were welcomed by the Army Air Forces.

Paralleling the trend in real aircraft, canard pusher models were once popular but gave way to conventional types with propeller in the nose and vertical and horizontal stabilizers at the tail. Spiral and directional stability are major problems in this design craft but because of its generally good overall setup, the XP-55 affords a remarkable subject for expermentation in tail-first models. The only major change from scale is the suggested enlarged front elevator which has dihedral added to achieve maximum stability.

Little difficulty will be experienced in building a model Ascender. Balsa wood is used and the little ship is fabricated in the conventional way. Exercise care in following details and you will soon be the owner of an attractive flying model of most unusual design.

FUSELAGE: Easiest and most accurate means of constructing the fuselage is by the use of bulkheads and keels. Measure the size of parts from the plan and cut bulkheads and keels from sheet balsa; note that only half bulkheads are shown so make two of each. Pin top and bottom keels over the side view of the plan and attach half the bulkheads and one side keel. Now remove this structure from the jig and add the remaining bulkheads and keel. Stringers are firm square stock and they should be placed in pairs, one on each side in respectively similar positions to keep from pulling the body out of line.

Where the wing fits in, curved 3/32 sheet pieces are fitted to the fuselage sides to conform to the wing surface curvature; place these accurately because they aid in aligning the wing correctly. The front elevator mount is 1/16 balsa and is carefully fitted at the exact positive angle of incidence shown. The elevator halves are later butted against these.

At front and rear of the fuselage, laminated pieces of balsa are shaped so as to fit to bulkheads A and I. The nose plug has a .035 diam. music wire hook in it to hold the rubber motor. The nose is removable, as is the tail plug which is removable from the laminated tail block. A 1/32 disc of plywood is used for the face of the plug and the rest is laminated squares of balsa. Drill a tiny hole through the plug for the propeller shaft and then cement washers to either side.

WING: Front elevator and wing are constructed in a like manner. Ribs are cut from sheets of the thickness indicated for each on the plan; make two of each. Leading edges and spars are likewise cut from sheet balsa. To determine the taper, measure the depth at the center and tip ribs as well as the overall length and cut them out accordingly. Remember to build right and left panels of each surface. Join the wing halves by raising the tips to the proper dihedral and cementing rib No.1 firmly into position. When assembling the elevator, incline the inner rib E-1 so that when it is butted against the fuselage mount the dihedral will be as indicated on the side view.

CONTROL SURFACES: Fuselage fins and wing tip rudders are made next. For a flying model it is suggested the fuselage fins be made flat to obtain the fullest stabilizing action from them. Scale build-ers will note that crossection shapes are given to enable them to duplicate the real plane more exactly and in this case the structure should be altered accordingly. Build the two fins, top and bottom, as well as the wing tip rudders from 1/16 thick stock of the width indicated. Cement joints firmly so they will not warp..."

Years ago long time friend, the late Frank Landry, wanted to build and fly a control line XP-55. He completed the model from enlarged Stahl plan to about a 40 inch wingspan (roughly to same as the French plan oz9798). The model refused to take off by flipping on its back on the t/o run. Eventually total destruction occurred. I have one of the main landing gear as a souvenir. I told him I could build and fly one. The challenge was accepted. I built a proof of concept 1/2A Cox powered version. It also had take off problems until it was realized the all flying stabilizer, as per the full size, was the problem. It should have been pivoted at the leading edge. To avoid major change, the stab was cut from tip to tip, the front section cemented to the fuselage and the rear pieces hinged as elevators. Now only balance was the problem. Eventually, after moving the engine as far to the front as possible without considerable structure change, adding 1 1/4 ounce lead to the front l/g strut, and installing a wire to keep the prop from hitting the ground it flew. It was difficult to control until the fuel ran out but then it smoothed out and allowed a nice glide and landing. It seems the center of pressure is too close to the c/g. [See model photo and more pics 003-005.]
EdShearer - 29/05/2018
In 1944, the year I was born, my Daddy was a member of the US Army Air Force as a bombardier instructor, stationed at Greenville SC. As he tells it, one day a strange looking ship came in and everybody had to run out to the ramp to look at it, with the tail up front, pusher prop and all that. It couldn't have been anything other than the XP-55. The one item he remembered most was a bright red plaque riveted to the instrument panel, "WARNING. DO NOT STALL UNDER 10,000 FEET". Now we know why it never went into production.
DougSmith - 29/05/2018
Add a comment