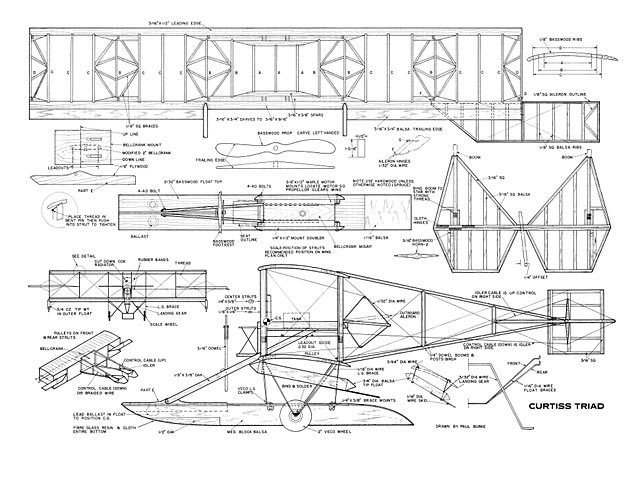 Quote: "As this is the 50th anniversary year of Naval Aviation and the 30th year of National Model Aircraft competition, the last 14 years ander the sponsorship of the Navy who recognize this as the best combat for juvenile delinquency, Admiral RB Pirie, USN Deputy Chief of Naval Operations for Air has always recognized this and has been an extremely good friend of all Model Aviation and moving factor in the harrnonious relations between the Navy and the Academy of Model Aeronautics. Therefore the Academy to show their appreciation of the splendid efforts of the Navy and in particular Admiral Pine decided It would he a fine gesture of appreciation to commemorate the ocassion with the most appropriate gift possible - a model airplane - and what better plane than the first Naval aircraft, the Curtiss Triad.

I do not know of any model that gave me more pleasure or satisfaction to design and develop than this scale model of the Triad. Many, many happy landings Admiral Pirie.

The Triad (really A-1) was the first Navy airplane purchased in 1911. This single airplane, which cost $10,000 was a good sum for an engine, some bamboo and covering. The original had many variations, the hunt elevator was changed from one location to another at different time. This set-up caused considerable longitudinal instability and was later removed.

Building the Curtiss Triad is a little different from the run-of-the-mill type model. However, it is not hard and if the following procedure is followed, I am certain very little difficulty will be encountered: Start with cutting the required ribs, a metal template will help here. The template helps maintain accuracy for the numerous ribs.

Notch the leading and trailing edges and assemble the wings, using scrap stock to hold the leading and trailing edges in position while the glue is drying. Elmer's white glue was used here and found it to be excellent for hard wood. One word of caution: keep a damp cloth handy and when a joint is cemented, wipe any excess off. This is easy now, as it is very difficult to sand later when it has dried, and mach cleaner construction will result.

Cement in all the gussets which surround the wing struts. The balsa trailing edges can now be cemented in place. When the wings are dry, sand the leading edge to outline as shown, also the ribs so that the entire wing is smooth even plan form.

The wing struts are now to be cut to shape and streamlined. Note the four center struts are large to support the engine mount. These should not be shaped until the engine mount is fastened in place so good glue joint can be obtained... "

Added a pdf of the article pages, text and pics, thanks to e4calvo. 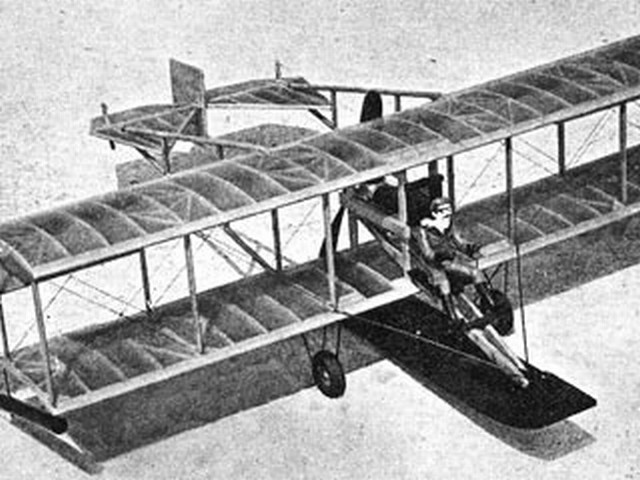