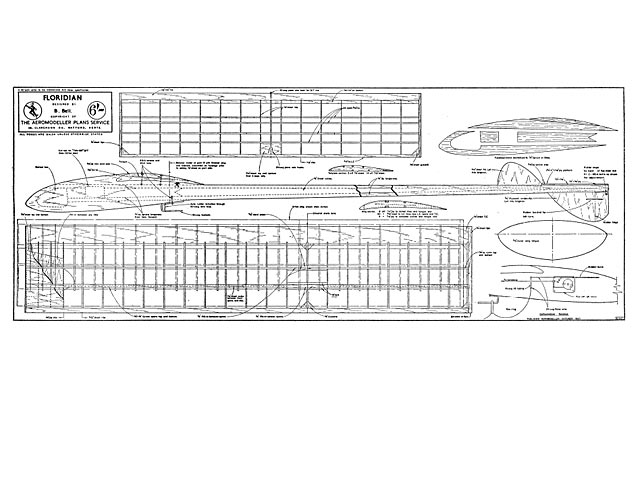 This glider was named while Bill and Betty Bell were in Texas. They had previously lived for five beautiful years in Florida and planned to return as soon as they could. So it was with wishful thinking that they decided to call it that. The design was born when Jack Sheffer of Fort Worth and Betty wanted to build a simple yet efficient glider for the approaching local eliminations in the Spring of 1961. The Bell's pestered Bill until he finally sat down and roughed out an A/2 along with wing and tail sections. Four people collaborated to produce the fuselage nose shape. It must have been drawn and redrawn at least a dozen times before everyone was satisfied!

Jack and Betty built their gliders and only had time to roughly adjust before the elims. They finished first and third in this very first contest. On to Tulsa, and to win the place on the team over such famous former winners such as Herb Kothe and Bob Sifleet.

The Floridian has several features which make it nice to fly. It will stay directly behind on the tow until in some lift - then it will veer sharply to the left. Now whether it is all the way up overhead or only part way, always let it off. It has never failed to give a good flight if one pays heed to the sign. Another feature is the adjustable tow hook arrangement. One can shift it to suit the wind condition (and in Texas and generally over the entire US there is Wind!).

Betty was astounded in Leutkirch for the 1961 World Championships at the complete absence of any breeze on A/2 day, in fact it put her 'off' with 2 very dud flights out of the vital five. The model will tighten up in a thermal usually without spinning out and upon leaving a thermal will open out the circle to give the chance of finding more lift. The extremely aft centre of gravity (about 85 per cent) is a pet design theory of Bill's. It certainly does make the tail work..."

Quote: "Many of these models have been built in the United States and they are continuing to win... at the 1962 American National, Steve Parker of Fort Worth, Texas, a junior of fifteen years not only won first in junior but had a top time in the event beating all the senior and open fliers to take home the trophy." 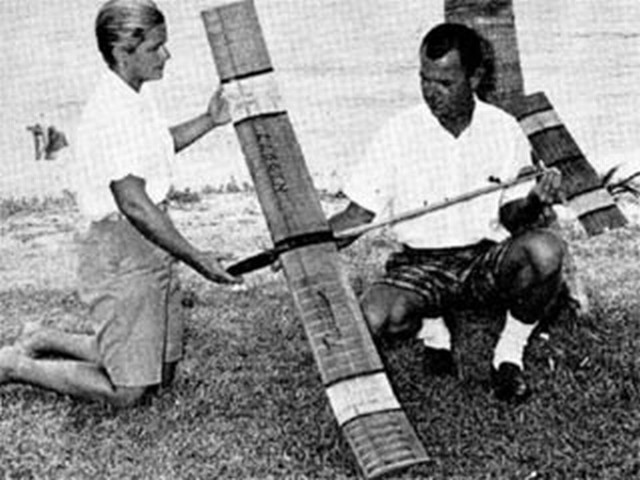 No dihedrel given.
hymie - 02/01/2014
No dihedral shown on plan.
anon - 10/07/2016
Hi Outerzone, the following note extends the story of Floridian (oz29349) and may be of interest:
There is a report about the 1961 World Cup on German television with a brief scene at 2:07 showing Betty Bell with Floridian (oz2934) see: https://www.ardmediathek.de/video/swr-retro-abendschau/weltmeisterschaft-fuer-freiflugmodelle/swr/Y3JpZDovL3N3ci5kZS9hZXgvbzExOTI3MjQ
The picture gives an idea of the missing dihedral: approx. 6 inch. Regards,
Uli Huber - 03/08/2022
Add a comment