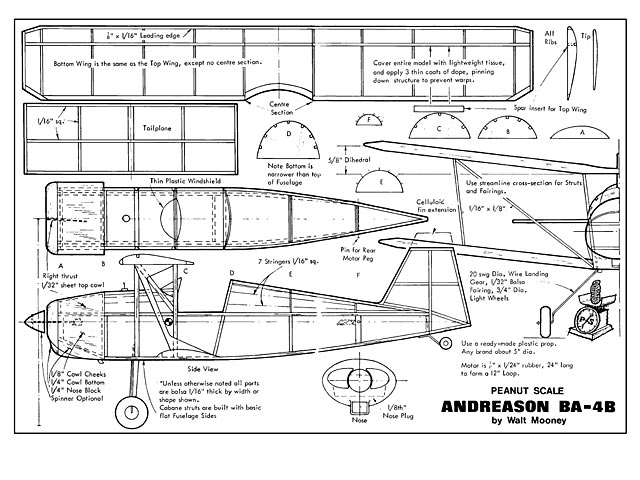 Rules: Models must be built-up reproductions of actual man-carrying aircraft. The maximum permitted wing-span is 13 in., and the minimum permitted wingspan is 10 in. Motive power must be furnished by rubber band(s). Models will be hand-launched. and timing will com-mence upon release. Timing will stop when model lands. Any flight of six seconds or snore will be counted as an 'official'. Three official flights are allowed, and total will be contestant's score. All Peanut Scale contests will be sanctioned by the Great God of the Thermals, HUNG.

Bjorne Andreason's airplanes all seem to look right and fly right also. The author flew the original BA-7 in California when it was first built, so when the three view of the BA-4B was published in the Experimental Aircraft Association's journal, 'Sport Aviation' he just had to build a model of it.

Peanut Scale, with a limit of 13 inches maximum span has lots of appeal so the BA-4B model was designed to be a Peanut Scale. As a flying model it turned out really fine and flew right off the board. Early flights with a twelve inch loop of one eighth flat Pirelli were between thirty and forty seconds with the landing under power. Later flights, outdoors, with a shorter motor and more climb disclosed a slight lack of vertical tail area which caused the model to spiral down to the right in the glide if it was adjusted to fly well under high power. A clear plastic tail extension was added to the model and it flies and glides well. This extension is indicated on the plans and perhaps can be discerned in the photos.

Construction of the model is very much standard for a small rubber scale biplane. Therefore we will touch only the higbpoints of the construction sequence and the few deviations from standard procedures.

The fuselage is a box frame made up of two side frames with cross-braces and formers and stringers added on the top. Build the frames over the plans noting that the cabane struts are an integral part of the side frames to simplify later assembly of the upper wing to the fuselage. Because most models tend to be tail heavy, shaping of the side and bottom nose contour is done with balsa blocks. The upper nose contour is wrapped sheet balsa trimmed to sire on assembly. Note that the bottom of the fuselage is narrower than the top, requiring shorter cross pieces than the top. This is important later because it will make the cabane struts wide enough apart at the top to fit the upper wing root ribs.

The tail surfaces are made flat over the plans from one sixteenth square balsa. Round the edges after they are removed from the plan.

Both the upper and lower wings can be built over the single wing drawn. A centre section is constructed between the two outer panels for the upper wing. The lower wing just consists of a right and left outer panel which is finally attached to the fuselage. All wing ribs are identical. Note the airfoil shape of the wing tip piece. After the wing structures are dry sandpaper the leading edge and the trailing edge to the shape shown at the rib drawing..." 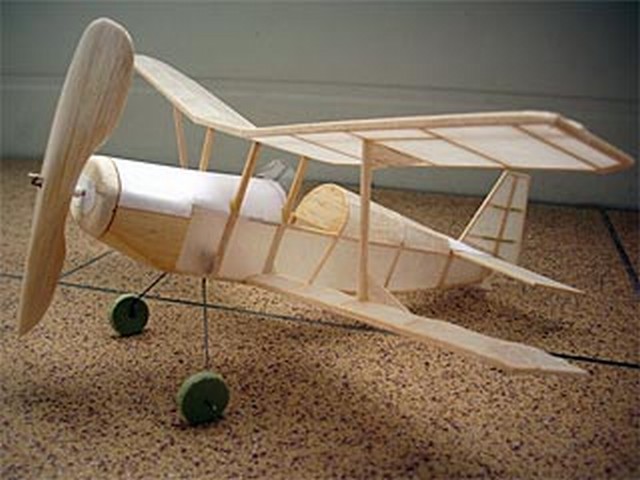 Thanks to Maciej for photos of the completed Andreason model. See http://awiatikforum.ok1.pl/viewtopic.php?t=556 for more pics.
SteveWMD - 29/05/2015
Hi Mary and Steve, please find attached a few photos of a BA-4B made by my friend and 'flying buddy' Jose Baptista Pereira from Walt Mooney's plan, some of which you might like to add to the photo gallery of that plan [more pics 003-010]. Baptista Pereira (BP to his friends) is a well-known (in Portuguese circles...) aeromodeller who has competed nationally and internationally both in free flight (F1A) and RC (Gliders - various classes), having won numerous national competitions and titles. Nowadays he flies mainly for fun, although still competing occasionally in RC Gliders and Old Timer events. He also likes to fly Indoor models, mainly Peanut and Pennyplane/ Easy B models. In fact, one of the images one remembers about BP is seeing him holding is 20ft looong pole, used to steer his 'propeller-ticking' (one can actually *count* the motor revs on those models... by eye) Easy B models away from danger... (Photo included herewith [more pics 011] but only to illustrate my point, as it is not related with the BA-4B). Coming as he does from the 'old free-flight school', his construction techniques are flawless, and the results usually in the 'jaw-dropping' class for us, mere mortals... Have a look at his BA-4B model and see for yourself...
ArnaldoCorreia - 27/05/2016
The plans shows 12 inches peanut scale. I enlarged it to 16 inches [pics 012, 013].
Esvin Blanco - 26/03/2021
Add a comment