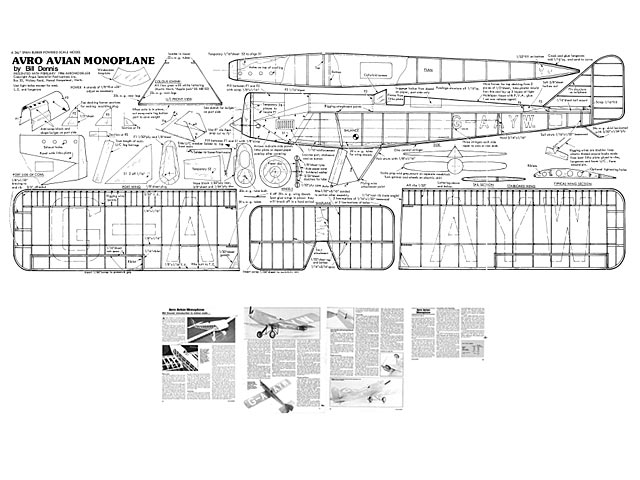 The subject G-AAYW was one of only two Avro 625 Avian Monoplanes built. Flown in the 1929 King's Cup Race by Captain Neville Stack.

After years of attending indoor scale meetings as a spectator, I decided recently it was time I had a go myself. I had built an Andrew Moorhouse Luton Minor (oz10024) some time ago, but this is my first serious attempt. I decided Peanut was too small for my limited skills, and people appeared to be having great difficulties with CO2 indoors, so I settled on the open rubber scale class - these always seem to have the most pleasing performance. I chose the 'Avian' because it is mostly very simple, with not too much structure and I built it large in an effort to keep the wing loading down.

I then thought it would he a goad idea to relate my experiences, as a beginner, and your editor agreed to feature the plan so that others could have a go and learn from my mistakes; there were one or two...

Materials: To build this model you will need some items not available from your local R/C model shop, namely plastic propeller, basswood, Jap tissue and narrow strip rubber, all of which can be obtained from SAMS, 2 The Drive, Blackmore End, Wheathampstead, Herts. I used no special indoor wood, light 'shop' balsa is adequate for the larger model. What was not adequate was the quality of my wood grading, which erred on the heavy side. For example, having cut a spar from light wood, it would seem in isolation to be very weak, so I replaced it with something stronger! However, when the structure was complete I could see how each piece imparted strength to the whole and it was obvious that it was much stronger and heavier than necessary, contributing to the generally excessive 'avoirdupois'. I should have known better since I had phoned Alan Callaghan beforehand and he had advised me to use the lightest wood everywhere: except for the wing leading edge und longerons, so beware! My realistic target weight was 45g - it finished up at 62g.

A three-view, article and photos appeared in the Autumn 1985 'R/C Scale Aircraft Quarterly' - a limited number of back issues are available and 1/24th scale drawings are available at £1.80 plus 50p postage from Aeromodeller Plans Service - please quote plan number 3068.

Fuselage: I began with this component and quickly come across my first difficulty, namely that of keeping the structure accurate and true. On an outdoor model, fuselage lungerons are large enough to keep their shape, but when dealing with 1/16in sq balsa, I found that they were very easily distorted from their intended path by badly fitting spacers. This is especially noticeable when the fuselage lines are straight, as in the Avian.

My first attempt at a fuselage side frame, built in my usual way, ended up like a wavy banana, so out it went. However, the following method worked very well. First, I cut two pieces of 1/8 sheet with straight edges and pinned them on the plan following the outer edges of the straight sections of the upper and lower longerons. These were cut to length and held against the sheet with scraps pressed up to the inside edge. It goes without saying, of course, that no pins are hammered through any part of the structure!

The curved portion of the lower longeron is held to shape with pins either side and reinforced with 1/16 sheet - if you do not do this, it will try to straighten itself when removed from the plan, with the upper longeron bending downward. Spacers are cut and the ends lightly sanded to get a perfect fit and glued in place with sufficient but not excessive PVA type glue. Finally, the second side is built over the first in the time honoured way - again, the sheet jigs ensure both sides are the same.

I found it even more difficult to assemble the sides accurately, so the sheet jig idea was extended.The fuselage tapers in straight lines from the front of the cockpit to the tailplane and again straight edged pieces of sheet were pinned down, this time along the inside edges of the longerons on the plan view. You can now easily cut two identical sets of accurate spacers, one of which is pinned in place dry between the jigs. Next, one of the jigs is removed and one side glued in place - inverted - against the spacers. The jig is replaced against the outside edge and the side kept vertical with several balsa right angled triangles..." 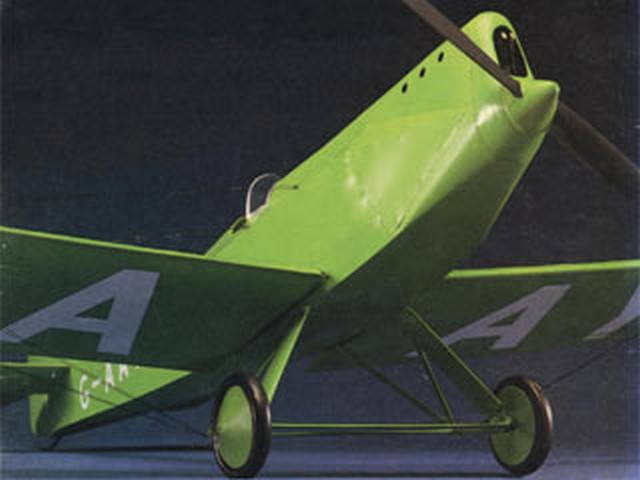