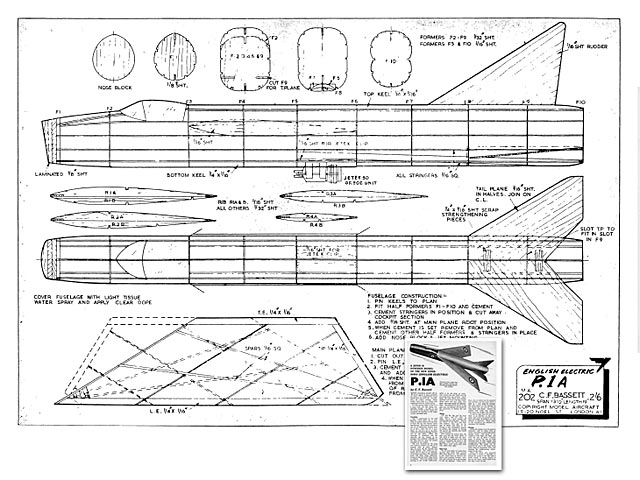 Quote: "THIS interesting aircraft will no doubt appeal to many modellers by reason of its comparatively recent release from the secret list. In addition, the rather unusual design readily lends itself to a flying scale version powered by a Jetex motor. It is the second model of the P.1A I have built, the first being considerably smaller. In fact, it was the success of the smaller model that prompted the building of the larger version described here.

Fuselage. This is constructed in two half sections. First, place 1/16 x 1/4 in strips of medium balsa on to the plan to form the top and bottom centre keel formers; then cement in position one set of half-section formers from F1 to F10. Note that F1 is 1/8 in sheet, F5 and F10 are of 1/16 sheet, whilst the remaining fuselage formers are of 1/32 sheet. When this operation is completed and the assembly has set, cement 1/16 sq stringers into positions indicated on the plan and cut away the section occupied by the cockpit.

The area occupied by the wing root between formers F3 and F7 is covered with 1/16 sheet. Repeat this, of course, for the opposite side of the fuselage. The wing is in two halves and as there is no dihedral, no bracing is necessary, the cemented joints and fillets being sufficiently strong to hold the small wings firmly in position. Trim any surplus wood showing in the trough underneath, which is for the Jetex 50 motor. Now cement the nose block and clip mounting piece into position..." 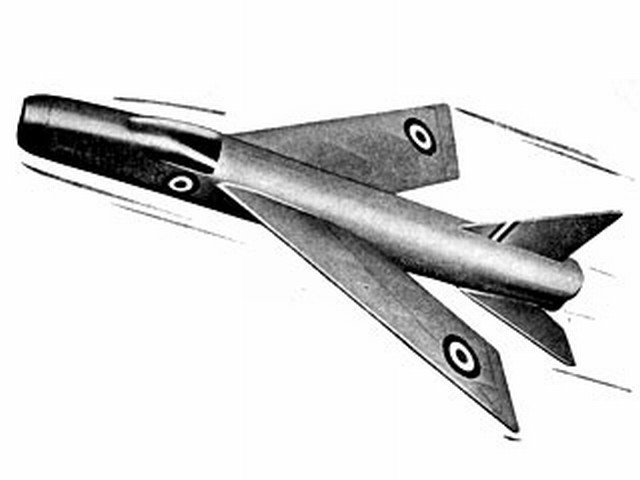