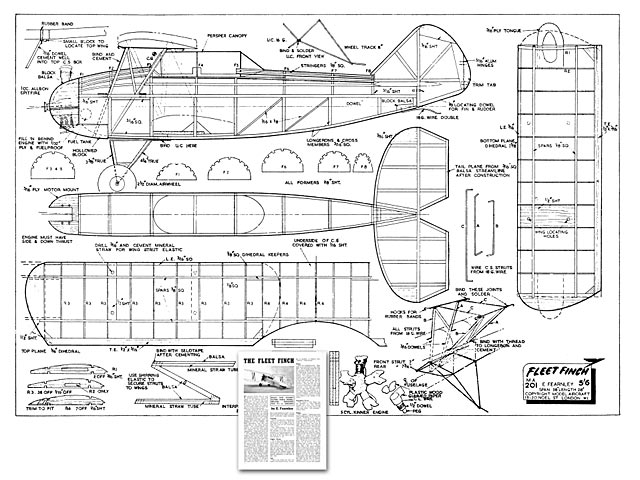 In previous World War II models presented, I have paid tribute to the fighting aircraft of Britain and USA, but this model represents a war effort which often goes unsung, though just as vital to a nation's life blood - the difficult job of turning rookies into front-line pilots, in a never ending stream.

Canada undertook this far from glamorous job in the last war, as part of the Commonwealth air training scheme, and apart from the training of thousands of pilots, they even made the training aircraft as well. While de Havillands of Canada made the famous Tiger Moths (complete with greenhouse over the cockpits) the Fleet organisation went into mass production of this Finch primary trainer. The aircraft's history goes back to an American Navy trainer first designed by the Consolidated organisation. Fleets built about 600 of them, presumably under licence.

As a model, the Finch took my eye. Primary trainers are usually pretty stable designs, and also very tough they have to be able to fly either with, or in spite of, the efforts of a novice pilot - a fate worse than that suffered by many a model, which at least has no dead-handed human to mess things up! As far as toughness goes, it is doubtful if any design has been presented in Model Arcrraft with more severe testing behind it than this. Are have all heard of the model that 'flies off the drawing board.' This one did, but it was flown right back on again, when I redesigned the top wing (originally a two-piece effort) and strengthened up one or two parts that didn't seem to like down wind landings in a gale! As it is now presented on the plans, it should stand considerable rough treatment.

Fuselage. This is a simple box, with formers added in the usual way. Keep the top long,eron true to make it easy to study the wing and tail relationship when testing.

The undercarriage is of piano wire, faired with balsa. Note that the fastening is on the torsion bar principle to avoid moving parts, but it may need a rubber band or two at the front if the wire gives after a hard landing or two.

Engine Mount. This is plywood, as this material is easy to work and different engines can be fitted. If fuel proofed, it will stand years of wear, and in a bad crash will save your crankcase. Note that the amount of down and side thrust is quite large..." 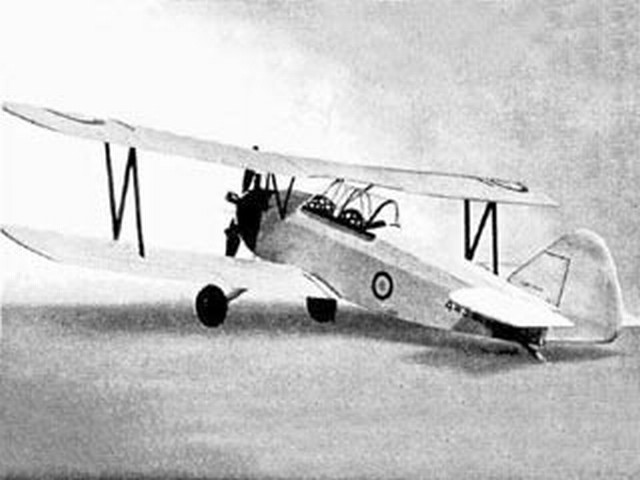