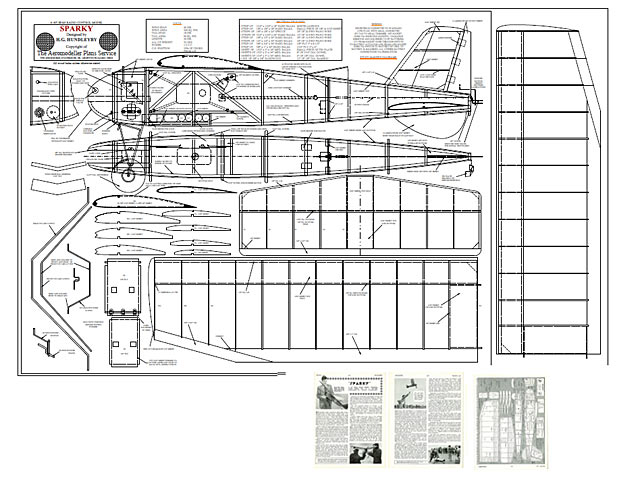 Sparky. RC model. This is a modern redrawn plan in PDFvector format.

Quote: "a 48in radio control stunt model for 1.5cc motors designed by a recognised expert of the era, Harry Hundleby. In those early days of radio this was a cutting edge design and proved to be very 'stuntable'. Nowadays what a pretty and unusual trainer she would make with 3 channels on board. As always these are tracings of the original scans, if you choose to build with them please proceed with utmost caution and measure well before cutting." 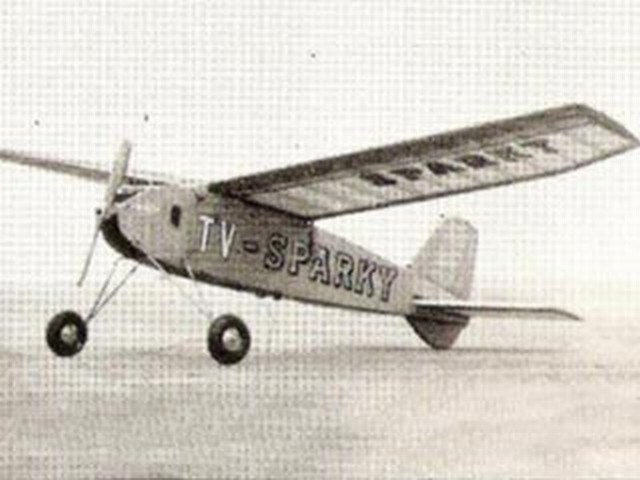 Thanks to ghostler for pointing out there is an anomaly with listed wingspan. I reckon the correct span for this one is 48in. The pdf file mentions 40in but I think that is just a typo. Sadly, I don't know how to edit and correct this vector format pdf without messing it up, I only do bitmaps.
SteveWMD - 04/09/2014
You might be interested to know that Harry Hundleby's 'Sparky' appeared on Children's television, BBC, way back in September 1957. That's how the model got its 'TV Sparky' name. I've got three Sparky models, so I know a bit about the design. But it certainly wouldn't make a good trainer, because it was designed as a RC stunt model.
MichaelJones_Gloucester - 23/03/2018
Some additional information. The model appeared on Children's Newsreel with designer, Harry Hundleby - then editor of Aeromodeller. It showed Harry building Sparky, installing the radio and then flying it. It was one of the very few items about radio control model aircraft. In those days very few people had television, so not many people would have seen this brief item - about 5 minutes. I had a chat with Harry back in 1996 - I phoned him at his newsagents shop in Douglas, Isle of Man.
MichaelJones_Gloucester - 27/03/2018
Add a comment